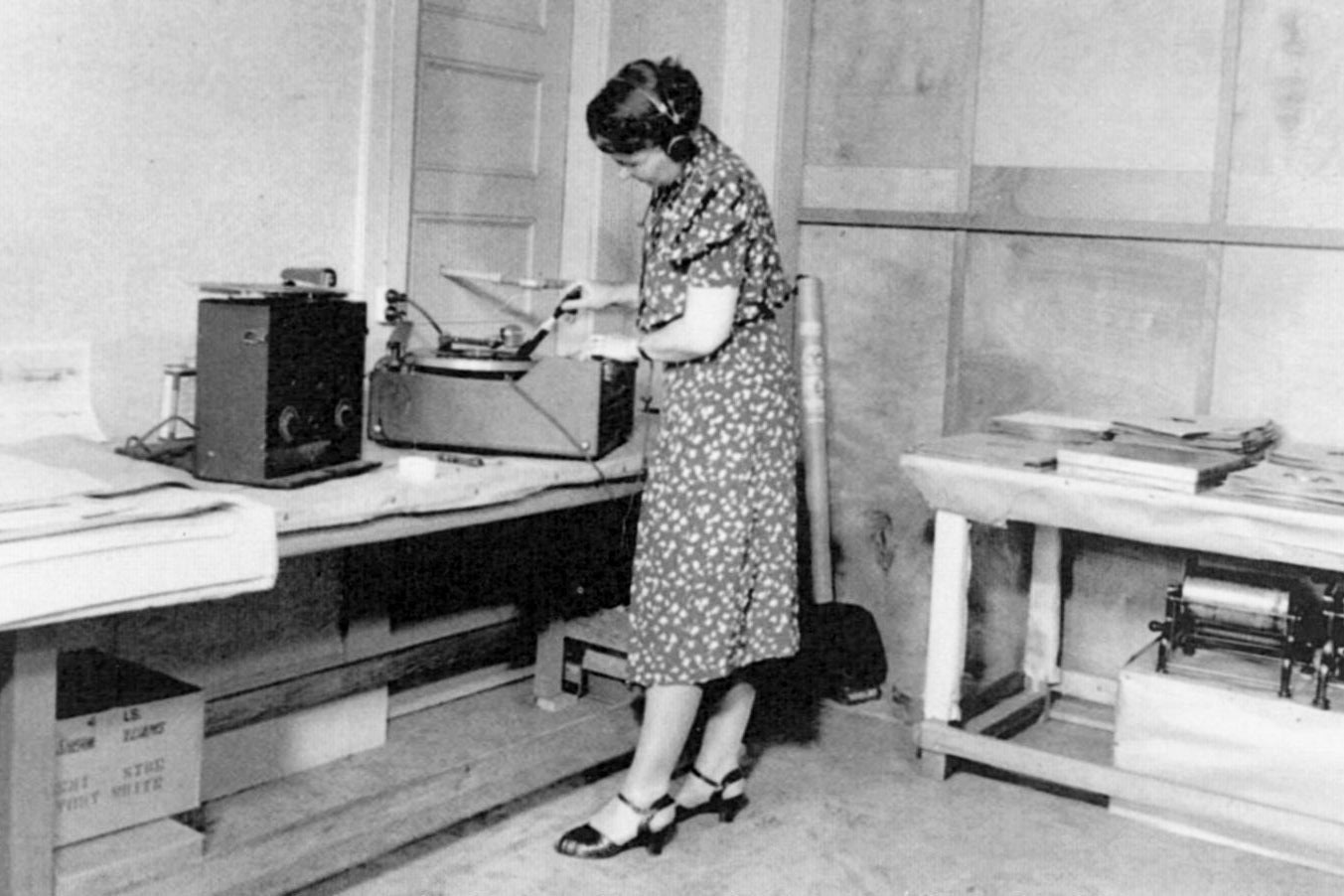 Murder, infidelity, drunkenness, deceit, surreal zoological visions, warfare, sea journeys, and divine retribution are pretty common themes in American folk music. Sidney Robertson Cowell knew all that. Still, it’s hard to imagine a musicologist as professionally qualified as Cowell to comment on what she called the “wildly Freudian” nature of a folk song like “Bologny Sausage.” “Bologny Sausage” is a darkly comical ditty about a young woman who dies from choking on a big sausage, sung by John McCready, whom Cowell took notes on and recorded in 1939 in Groveland, California. She was unperturbed.

After all, Cowell had taken seminars with Freud’s collaborator, psychologist Carl Jung, in Zurich in the 1920s. She had helped proofread and type up his lectures. At the time, her first husband was studying with Jung. She remembered Hermann Hesse and Richard Strauss dropping by for one of Jung’s lectures. She also said she was present at the 1913 Paris premiere of Stravinsky’s The Rite of Spring. (Between the ages of 10 and 14, she took annual trips to Europe with her piano teacher.) In California she knew a young John Cage, one of her second husband’s students, before Cage left for New York. She was comfortable in the company of these towering figures of modernity, but she was also at home hanging out with lumberjacks, miners, and fishermen, or among singers and musicians who retained bits of ancient traditions.

“I don’t scare easily,” she wrote once in allusion to her willingness to track down songs in unlikely places—like the time she spent a night riding in a hearse just to question an informant (the driver) about the Child Ballads.

Sidney Robertson Cowell might be starting to get the attention her rich life, first-rate writing, and astoundingly broad work as an ethnomusicologist deserve.

Cowell (1903–1995) was a pioneering ethnomusicologist and folklorist. It’s hard to say whether her work—recording folk music from many parts of the world, with particular attention to music from California and the Upper Midwest—has been overshadowed by her role as the collaborator with (and sometime musical inspiration for) her second husband, composer Henry Cowell. But, more than 20 years after her death, Sidney Robertson Cowell might be starting to get the attention her rich life, first-rate writing, and astoundingly broad work as an ethnomusicologist deserve.

Whether she was aiming to or not, Cowell documented the bubbling multiethnic diversity of 20th century America. She made notations of the songs of elderly Jews on the Lower East Side of New York City in the ’30s. She went on a trip making field recordings with John Lomax in the mountains of western North Carolina. On these expeditions, she lugged around heavy tape recording equipment. Over her career she helped record African-American chain gang workers in the Ozarks, cowboys of the West, Finnish lumberjacks in the Upper Midwest, and Portuguese fishermen in Massachusetts. In California she recorded Armenian singers; in Fresno, Mexican wedding music; at Shasta Dam, dam workers singing songs about famous fights; and in San Francisco, unaccompanied Icelandic singing. There was also a Sacred Harp shape-note choir at Stanford University in Palo Alto. And she found Serbian farm workers from the Central Valley who performed in a style that was thought to be “authentically Homeric,” harkening back to ancient Greek epic recitation, and scores of other varieties of folk songs performed by a range of ethnic groups across the state. Outside of the U.S., she recorded elderly singers off the western coast of Ireland; her work there produced more than 11 hours of recordings. She also documented musicians and singers in Thailand, Iran, Malaysia, and elsewhere, though very little has been written about her work in those places.

She learned from Charles Seeger (the father of Pete, Peggy, and Mike). Seeger gave Cowell some of her first experience recording folk music in the field. One shouldn’t be too curatorial at first, once musicians and singers eager to document their knowledge had been found. “Record everything, don’t select, don’t omit,” was how Cowell remembered Seeger’s instructions. The two worked in the Resettlement Administration, a government program initiated in 1935 by President Franklin D. Roosevelt to assist migrant workers and farmers in the wake of the Great Depression. For Cowell and Seeger, music was utilitarian in that it eased tension and helped foster a sense of community.

In short, Cowell had more of a documentary-maker’s perspective on her fieldwork projects than that of a record scout.

“I am anxious to give an honest picture of the musical repertory of a time and place, (which necessarily includes a lot of what both folklorists and musicians properly consider nonsense—) instead of extracting gems alone,” she wrote of her focus.

“I was curious about American Folk song—what was American about it?”

Americans didn’t always think of recent arrivals as participants in the rich folk life of the U.S. When appreciating the musical traditions of the United States, connoisseurs tended to focus on specific marginalized groups—African Americans, Native Americans, descendants of Scotch-Irish immigrants in Appalachia—that had been in the country for a while, long enough for their music-making to have been shaped by the land and history, to have morphed into its own uniquely American thing, not just a bag of old songs brought from elsewhere.

Cowell tried to zero in on what made something uniquely American, or at least to explore the pivotal moments with a historical sweep. “I had for some time been worrying the question of folk song, like a dog with a bone, and particularly I was curious about American Folk song—what was American about it?” she says in her taped recollections from the 1980s, which are housed at the Library of Congress.

But Cowell seemed to understand how fundamentally American it was to have a batch of songs about some other place, some other region—a distant homeland or a recent upheaval. In a book proposal for a project about California folk music—a book she never ended up completing—Cowell wrote: “Folk music has not been circulated here long enough for California life to have put a characteristic imprint on it, and English-speaking people have been here a relatively short time, so they contribute only a part of the state’s wealth of traditional music.”

For Cowell, folk songs were like glacial erratics—those rocks that differ from their geological surroundings because they were carried and dropped there by larger forces of shift and flux. Over time, they start to take on aspects of their surroundings, through contact, pressure, the elements, etc. She knew that everything—particularly in America—had come from someplace else and was being shaped by its present surroundings.

Beyond her deep-bore understanding of the multicultural swirl of America, Cowell, like many of the modernist figures with whom she had formative interactions, was coming to terms with the advent of portable recording technology and the manner in which mechanical reproduction would shape our understanding of the modern era. Folklorist and researcher Deirdre Ní Chonghaile has written about Cowell’s work in the Aran Islands of Ireland. Ní Chonghaile explains that an “important aspect of her style of collecting” was the fact that “she understood the historical importance and the potential impact of sound recording.”

She quotes Cowell’s own writing on the subject:

“Recording is not necessarily a museum thing, of course (in case that was implied) but is the only true way of knowing—preserving the knowledge—of what native culture is, in a form that can then be circulated with truth. The old is being snowed under so fast at the moment, and people will want so badly to know what it actually was in another generation or two, it needs an extra support at the moment.”

Those who have written about Cowell point out that her mode of collecting recordings and songs stood in contrast to many of her colleagues’, most of them male. Cowell found many of the big figures in the field, particularly John Lomax, to be patronizing toward some of the people they recorded, wrong-headedly obsessed with finding the oldest material possible at the expense of newer, evolving music-making traditions. “In contrast to some of her colleagues and mentors, Sidney’s style of music-collecting was respectful, relatively holistic, and remarkably broad-minded,” writes Ní Chonghaile.

Do we have room in our minds for more than one larger-than-life, globe-trotting musicologist? We have learned to revere Alan Lomax for his pioneering work documenting folk music from the American South (and all over the world). We’ve learned that his work helped preserve and honor folk traditions that were changing—and in some cases vanishing quickly—in the 20th century. Lomax has rightly been the subject of biographies, recording anthologies, exhibits, and radio broadcasts. But Cowell’s ethnographic recordings—as well as her in-depth notes, photographs, and writings—hold all kinds of insights about the America we know now.

In his biography Henry Cowell: A Man Made of Music, author Joel Sachs described Sidney Robertson Cowell as a “brilliant, determined, reserved yet fiery woman with extraordinary talents as a writer, photographer, folklorist, and musician…” Commenting on her role as a prolific commentator on Henry Cowell’s life, legacy, and music after the composer’s death, Sachs writes: “She must have sat at her typewriter continuously for thirty years.” (Sidney Robertson Cowell co-wrote with Henry the book Charles Ives and His Music, the first scholarly entry about the pioneering American composer’s work.)

Much of Sidney Robertson Cowell’s energies were spent enthusiastically celebrating and documenting the work and talents of others. It’s long past time that the average student and fan of America’s rich musical culture know more about Cowell herself. My hope is that there’s an undiscovered memoir lurking somewhere. 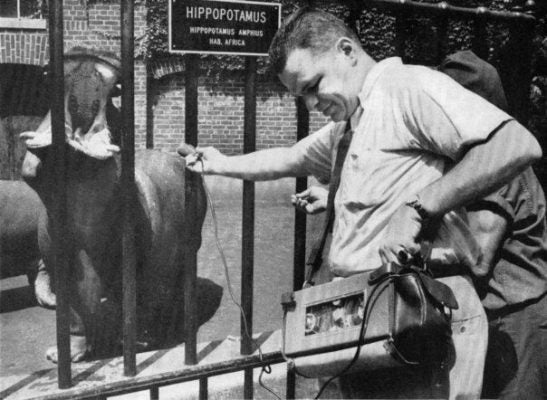