Iran in the Trump Era

President Trump’s decision to order the assassination of Iranian Major General Qasem Soleimani has backfired in spectacular fashion. Why?

President Trump’s January 3, 2020, decision to order a drone assassination of Iranian Major General Qasem Soleimani in Iraq has backfired in spectacular fashion. Less than two months ago, the streets of nearly every major city in Iran were choked with more than 200,000 anti-regime protestors. They chanted slogans against recent increases in gas prices and income inequality. They set fire to hundreds of banks and other businesses.

Trump’s abrupt withdrawal, two years ago, from the 2015 Joint Comprehensive Plan of Action on Iran’s nuclear program has had a strong impact on Iran’s economy. Severe U.S. sanctions have suppressed Iranian oil exports and led to spiraling inflation. The sanctions enact a collective punishment of the Iranian people for the actions of their political leaders, meeting the demands of Israeli prime minister Benjamin Netanyahu and the American right wing.

Trump’s decision to assassinate Soleimani has effectively negated a key strategic purpose of his own sanctions.

And yet, in the days following Soleimani’s assassination, hundreds of thousands of Iranians marched in multiple funeral demonstrations—the biggest political funeral in the Islamic Republic since the death of its founder, Ayatollah Khomeini. The crowds were making an important ritual observance in Shi’i Islam, connecting his martyrdom to its founding figures. Trump’s decision to assassinate Soleimani has effectively negated a key strategic purpose of his own sanctions, enhancing public support for Iran’s political leadership and diverting attention towards a foreign enemy.

The now 40-year conflict between the United States and Islamic Republic of Iran has been riven with such reversals, contradictions, and paradoxes. With its large population, varied geography, and considerable oil reserves, Iran has long been a political powerhouse in the region. It has thus been the target of Great Power geopolitics and neocolonial manipulation. The most consequential such event was a 1953 CIA-backed coup removing a populist prime minster who had nationalized Iran’s oil companies, in exchange for a Cold War alliance with its monarch, Muhammad Reza Shah. Opposition to the Shah’s oppressive plutocracy and its American support built toward the 1979 Iranian Revolution, which established the current regime.

Iran has maintained its regional influence despite all attempts by the United States to marginalize it. Structuring itself as a representative government overseen by an elite of Shi’i clerics, it adopted a strategy of sponsoring other Islamist-inspired opposition movements in countries around the Middle East, notably among Shi’a populations in Iraq and in Lebanon.

American attempts to divide and rule in the region have enhanced Shi’i-Sunni sectarianism, effectively validating Iran’s strategy. It also has resulted in the greatest foreign relations paradox of all—in the fight against Sunni fundamentalist groups, such as Al-Qa’ida and the Taliban, Iran is the United States’ greatest natural ally. Depending on the tempo of events, American military and foreign policy can be pulled in multiple directions at once. At the height of the military conflict with Sunni ISIS in Iraq and Syria, in 2015, the U.S. army effectively bribed Soleimani’s Iraqi Shi’i militias to get them to cooperate in the fight.

In a final contradiction, often ignored in the media, while Iran is powerful in comparison to its neighbors, it is still weaker than the United States’ global military empire, and even than Israel, which holds nuclear weapons that Iran does not. This has naturally led the Iranian state to fight through foreign terrorist actions and proxy wars rather than by direct confrontations. Despite these weaknesses, and, after decades of sanctions, a struggling economy, the Islamist regime maintains political power and a base of public legitimacy. Yet this legitimacy remains contested. The outcome of the current contest will have more to do with Iranian domestic politics than America’s scattershot foreign policy.

The Rise of the Revolutionary Guard Corps

President Trump’s actions have shined a spotlight on Iran’s regional military and intelligence activities in Iraq,  following years of poor or nonexistent media coverage of America’s ongoing 17-year occupation. For 20 years, as commander of the Quds Force, the leading Iranian foreign espionage and clandestine military unit, Soleimani directed Iranian efforts to bolster Shi’i militias in Iraq and Hizbullah in Lebanon. He fought ISIS and the Taliban.

Increased scrutiny often raises more questions than answers. Compared to Saudi Arabia, which is ruled by a single (albeit large) family of absolute monarchs, Iran’s politics are bewilderingly pluralistic. Not only does Iran’s government have representative and theocratic branches, but the military is divided between the regular armed forces and the Islamic Revolutionary Guard Corps, of which the Quds Force is one part.

Udit Banerjea examines the Corps’ growing role in espionage and intelligence, as well as its political influence, over the past few decades. Khomeini created the Corps during the revolution as a militia directly loyal to the Supreme Leader and clerical hierarchy. It tested its mettle immediately in the 1980-1988 Iran-Iraq war, expanding to more than one hundred thousand troops. After Khomeini’s death, in 1989, President Akbar Hashemi-Rafsanjani sought to restructure and privatize much of Iran’s economy, which allowed the Corps to make controlling business investments in important sectors, such as telecommunications.

The Corps has become even more prominent in the aftermath of the 2003 Iraq War and 2009 Green Revolution protests, as the Islamic Republic regime expanded its influence in the region and sought to defend its existence at home. The Corps’ plainclothes domestic militia, the Basij, were instrumental in suppressing the Green Revolution protestors. Supreme Leader Ayatollah Khamanei transferred many of the responsibilities of the Ministry of Intelligence and Security to the Corps’ Intelligence Organization, centralizing power in a tighter group closer to himself.

This trend made Soleimani one of the key architects of Iran’s diplomacy and foreign military strategy—the “second-most powerful man in Iran,” according to some accounts. But it appears that concentrated political and economic power of the Revolutionary Guard Corps has opened it to public criticism—and to infighting between government institutions and made it vulnerable to sanctions.

Of all the unintended outcomes of President George W. Bush’s decision to invade Iraq in 2003, the biggest was that it freed Iran of its greatest local enemy—Saddam Hussein. Even though the Iraqi population is two-thirds Shi’a Muslim, it was governed until this time by a Sunni elite that dated to the Ottoman era (before 1917).

The American-led political restructuring allowed Shi’a political parties to gain power, which brought considerable Iranian influence into the country. These alliances have allowed Iran to win more favorable political outcomes in Iraq than the United States, according to the international relations scholar Marina Ottoway. However, Iran has also faced both Islamist ISIS and grassroots social resistance to its power in Iraq in recent years.

Ottoway compares America’s ideological attempts at nation-building to Iran’s pragmatic tactics. Bush’s neoconservative advisors operated under the post-Cold War idealism that stated that democracy could be imposed on countries from above merely by rewriting their constitutions and holding elections. As a result, they destroyed not just Iraq’s Ba’athist leadership—they dissolved the army altogether, putting hundreds of thousands of men out of work. Some of the dissatisfied Sunni officer corps became the founding members of the Sunni militias that eventually coalesced into ISIS.

Iran, on the other hand, had been cultivating secret Shi’a opposition groups in Saddam’s Iraq since the 1980s. Many of these groups formed political parties after 2003. The controlling coalitions in government and the Prime Ministers have all been aligned with Iran, starting with Nouri Al Maliki in 2005. Not wishing to overplay its hand, Iran has supported the electoral process rather than pushing for a government styled on the Islamic Republic.

While Iranian assistance in the fight against ISIS enhanced its image in Iraq, not all Shi’a unquestioningly support the Iranian influence. Now that ISIS has been effectively eliminated, Iraq is witnessing a series of protests even larger than the Iranian protests. Iraqis, tired of two decades as a proxy battleground, are now demanding that both the United States and Iran leave their country. In November 2019, Iraqis forced prime minister Adel Abdul Mahdi to step down.

Will the Social Contract Hold?

There is no other state in the world quite like the Islamic Republic. This uniqueness has led journalists, pundits, and many academics to engage in simplistic speculations about how long it can survive. Looking beyond the visible resistance of secularists and college students, the political scientist Arang Keshvarian investigates how the 2015 nuclear deal seemed poised to reshape the economy and society in ways that would affect the everyday lives and political sentiments of all Iranians.

The Iranian Revolution was not merely a religious fundamentalist uprising. In fact, its early leaders were Marxists and liberal intellectuals demanding political freedoms and economic equality. Seeking to satisfy these demands after the Islamists took power, Khomeini did radically alter the Iranian economy. In addition to expropriating many of the biggest businessmen from the Shah’s era, he rapidly expanded elementary education, public sector employment, and housing construction. In the privatizing 1990s era, the state tripled enrollment in public higher education, in an attempt to build a workforce capable of competing globally.

However, the past 25 years of sanctions have blocked Iranians from obtaining these opportunities. Although being cut off from the world economy has perhaps shielded Iran from much of the predation of neoliberal free trade policies, business and wealth has been concentrated anyway, especially through the black market, in the hands of well-connected politicians and the Islamic Revolutionary Guard Corps. Subsidies for food, fuel, housing, and even direct cash payments have cushioned the blow to poor families, but in times of low oil prices and sanctions, such as the present, the states revenues drop, and it is forced to make cutbacks.

Keshvarian notes that neither the regime nor the elite opposition have yet found ways to conceptualize or control popular economic discontent. Iran’s right-wing hardliners have often enjoyed confrontation with the United States because it guarantees them public support. The appeal to defend the state from American imperialism still motivates many Iranians, but it is apparent that many others connect its diplomatic failures with its social and economic mismanagement. After the Iranian government’s admission, on January 11, 2020, that the military mistakenly shot down a civilian Ukranian airplane, anti-government protesters returned to the streets. Economic weakness is rapidly curtailing Iran’s diplomatic options. 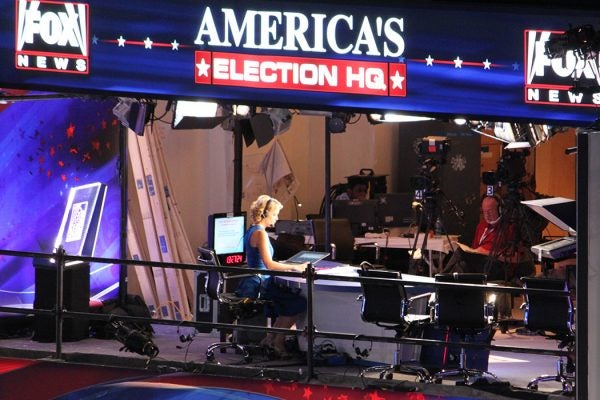 When it began as Fox-Movietone News, the company was known for appealing to viewer's tastes by leaving out upsetting news, including the rise of fascism.