The heat-resistant enzyme from Thermus aquaticus is used in PCR testing to detect pathogens. 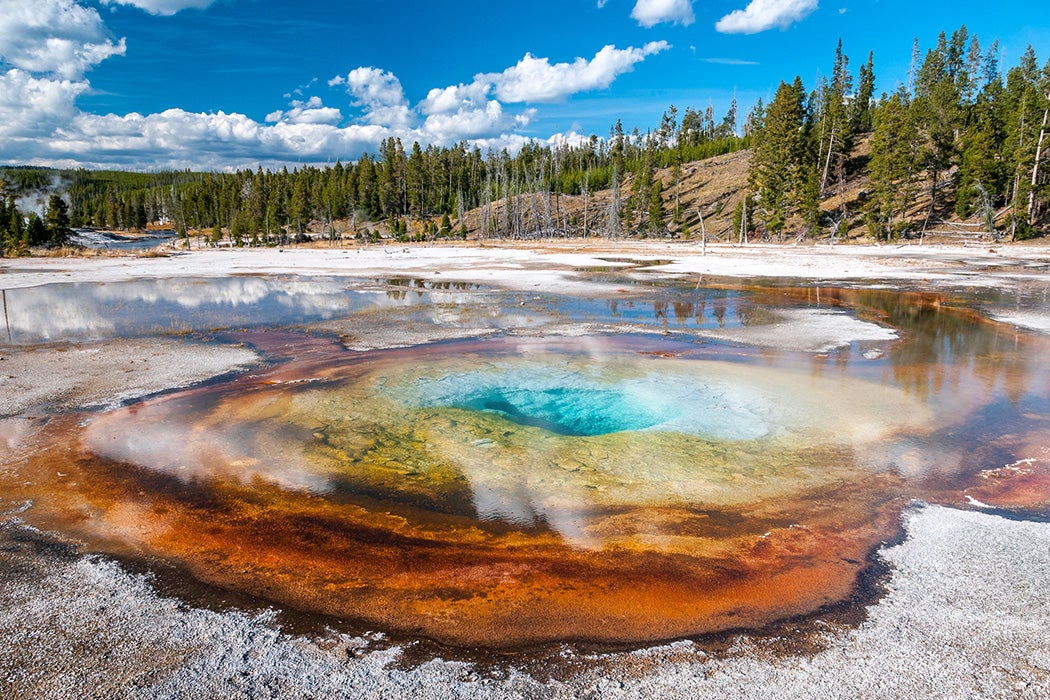 When microbiologist Thomas Brock first stumbled upon a hardy, heat-resistant bacteria in the Lower Geyser Basin area in Yellowstone National Park in 1966, he made the groundbreaking discovery that life could exist at much higher temperatures than previously thought. At the time, scientists believed that 73C was the hottest temperature a living organism could withstand, and that even heat-loving or thermophile bacteria preferred a cooler environment—about 55C. But much to the scientists’ surprise, Thermus aquaticus, as the new bacteria was eventually named, could survive in near-boiling water. Such organisms are known as extremophiles for their ability to thrive in extreme environmental conditions.

As Brock and his students began studying the resilient creatures, they made more interesting findings. T. aquaticus lived in other thermal springs around the world. It also thrived in manmade heated aquatic realms such as the hot water system of a building on the Indiana University campus where Brock worked. During part of its lifecycle, Brock’s student Hudson Freeze discovered, the bacteria produced a particular enzyme that also tolerated high temperatures and remained intact in boiling water. They named the heat-resistant enzyme molecule Taq DNA polymerase.

His original Eureka moment happened when he was driving along a moonlit mountain road into northern California’s redwood country on a Friday night.

Brock and his students were intrigued by the novel organism and its features, but the real significance of their research was yet to come. They had discovered something that would come to revolutionize medical science. About two decades later, T. aquaticus’ heat-resistant enzyme proved key to developing the Polymerase Chain Reaction or PCR method— molecular reactions necessary for identifying the presence of an organism’s DNA or RNA in a small sample. It is also used in DNA sequencing, genetic engineering and paternity testing. It works by replicating the original DNA string over and over—or “amplifying” it to make the detection possible.

The T. aquaticus rose to fame when in the early 1980s, biochemist Kary B. Mullis came up with a way of rapidly copying strings of DNA. His original Eureka moment happened when he was driving along a moonlit mountain road into northern California’s redwood country on a Friday night. “U.S. 101 was undemanding,” he later wrote. “I liked night driving; every weekend I went north to my cabin and sat still for three hours in the car, my hands occupied, my mind free.” That Friday night his free mind was imagining a DNA experiment.

As he thought of a series of reactions that would replicate the original DNA string over and over—or “amplify” it to make its detection possible—he stopped the car at a spot overlooking Anderson Valley, pulled a pencil and paper from his glove compartment and started jotting down his calculations. It looked like the idea could work.

Indeed, the method he came up with that night did work, but there was a snag. The reactions necessary for the DNA replication to happen required the reagents to undergo a series of heating and cooling. However, the high temperatures damaged the enzyme involved in copying—essentially cooked it—complicating and slowing down the process. “The polymerase we had originally used was easily destroyed by heat; consequently, more had to be added during each cycle of the reaction,” Mullis wrote. He needed a heat-resistant molecule so the reaction could just continue without human interjection. The enzyme from the thermophilic bacteria dwelling in the Yellowstone hot springs solved that problem. “The DNA polymerase of Thermus aquaticus, however, is stable and active at high temperatures, which means that it only needs to be added at the beginning of the reaction.”

The T. aquaticus’s enzyme became a hot commodity in scientific circles. Mullis’s PCR technique was patented by Cetus Corporation and the patent rights were later sold to the pharmaceutical company Hoffmann-La Roche for $300 million. In 1989, Science magazine named Taq DNA polymerase the “Molecule of the Year.” Four years later, Mullis was awarded the Nobel Prize in Chemistry.

The Taq PCR became a workhorse of scientific research and diagnostics. It has been used in DNA sequencing, ancient DNA analysis, gene expression analysis, gene cloning, and DNA fingerprinting. (In fact, Mullis was called upon as an expert witness in the O.J. Simpson murder trial.) It was also used in the Human Genome Project. Today, it is used to test patients, surfaces and objects for the presence of various infectious agents, including SARS-CoV-2. From a scientific curiosity to key component in modern-day biotech, the Yellowstone hot springs’ extremophile dweller has made a remarkable journey, helping save lives along the way.