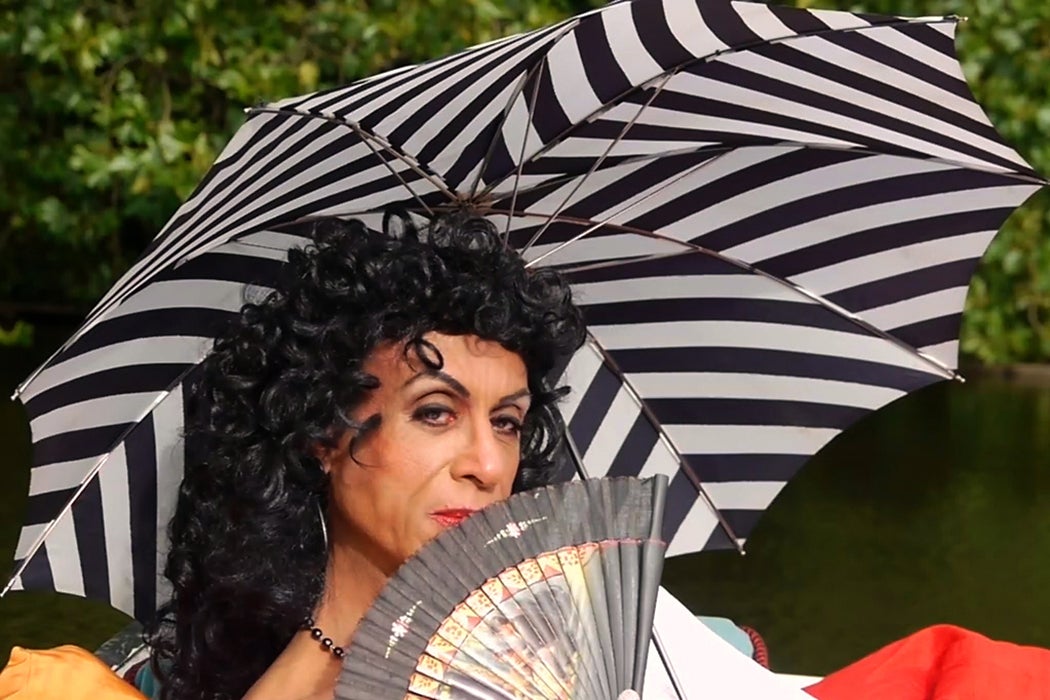 Critics and historians generally date the flowering of the Puerto Rican arts scene in New York City to the Nuyorican Poets Café and other cultural developments of the 1970s, but scholar Juan A. Suárez argues that queer artists like Mario Montez, José Rodríguez Soltero, and other figures of the New York underground movement of the 1950s and ’60s did more than precede them: they augured a “trans-American” and postmodern sensibility that inspired queer Latinx artists for generations to come.

Known for its avant-garde embrace of the kitsch, the absurd, the cheap, the cast-off, the obscene, the forbidden, and the sensual—often all at once—the underground movement included the likes of Andy Warhol, theatrical innovator Charles Ludlam, and filmmakers Kenneth Anger and Jack Smith. Underground artists often played up the camp value of Latin divas. When Susan Sontag wrote “Notes on ‘Camp,’” in 1964, she included “the Cuban pop singer La Lupe” in a partial, “random” list of “the canon of ‘Camp.’” Mixing the queer and the Latin in New York, according to Suárez, “may have been a case of the alien greeting the alien, of one despised minority warming up to another, even across a gap of incomprehension.”

Montez later appeared in several Warhol films and was a mainstay of Ludlam’s Ridiculous Theatrical Company.

The underground was primed to take notice of Puerto Rican queers, owing to pop-culture artefacts of the Good Neighbor Policy of the 1930s and ’40s. As the United States pulled back from active military intervention in Latin America, it sought lucrative, and exploitative, commercial connections there. This enabled Hollywood to import stars established in Latin America, such as Brazil’s Carmen Miranda and Mexico’s Dolores del Rio, and cast them in movies that reinforced stereotypes of Latin Americans. Nonetheless, a Latin-influenced cultural style known as tropicalism emanated from such exotic performances, and it transfixed many young queers. Some of them grew up to form the underground movement.

The queer Puerto Rican Mario Montez was one commanding figure of the underground. In Jack Smith’s Flaming Creatures (1962), quickly suppressed as obscene for its explicit orgiasticity, Montez appears “arrayed like a baroque Madonna” and “coyly flees before a number of avid pursuers,” in the words of Suárez. Montez later appeared in several Warhol films and was a mainstay of Ludlam’s Ridiculous Theatrical Company. As Suárez writes, “No one gave so much for so little.”

Another artist whose work Suárez analyzes, José Rodríguez Soltero, is less recognized today, arguably because he grew increasingly political during his career. Too left-wing for the artists, and too queer for the left, Rodríguez Soltero had “two [major] realms of interest—the macropolitics of anti-imperialism and the micropolitics of sexuality,” Suárez writes. Reportedly funded by Warhol, his film Life, Death, and Assumption of Lupe Velez (1967), featuring Montez in the title role, “was a Latino filmmaker’s attempt at the kind of Latin camp” that artists like Warhol and Smith were also experimenting with.

Rodríguez Soltero’s career took a turn after he scandalized the New York theater scene in 1968, with a performance that employed a live chicken and a strobe light, with the troupe storming the stage to the pro–Vietnam War song “The Ballad of the Green Berets.” Rodríguez Soltero set an American flag on fire; the effect caused a New York Post writer to remark later that she “felt ‘physically, spiritually, morally, and aesthetically oppressed by the show,'” as Suárez quotes her.

In the long, broad history of “artistic” (read queer) drift toward New York City, Puerto Rico has often been ignored, according to Suárez. The migration from that island, which indelibly shaped that other island—Manhattan—after World War II, brought its share of the artistic, as migrations always do. Suárez demonstrates that Puerto Rican queers produced performance art, theater, film, and complex ways of being that made them mainstays of the New York underground arts movement of the 1950s and ’60s.