The Monroe Doctrine’s Checkered Past

This 1823 policy initially focused on preventing European colonization in the Americas. But different U.S. presidents have used it to mean different things. 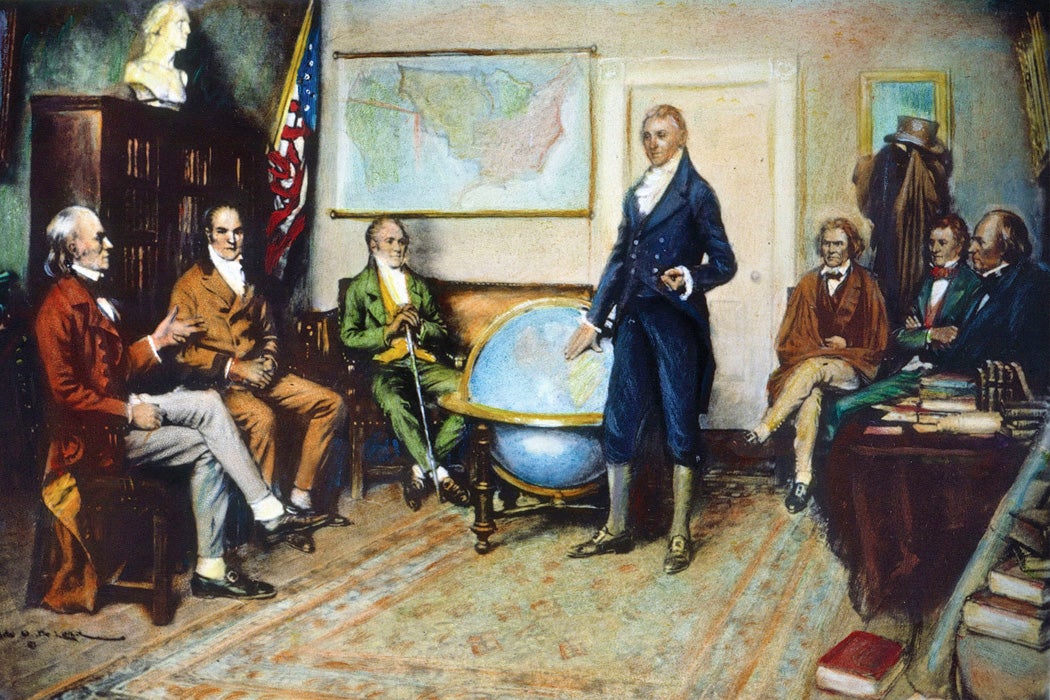 “We’re not afraid to use the word ‘Monroe Doctrine,'” National Security Advisor John Bolton said recently, regarding United States policy towards Venezuela. But just what does President James Monroe’s 1823 statement warning European powers about interfering in the Americas have to do with contemporary events?

The Monroe Doctrine was in fact mostly written by Secretary of State John Quincy Adams. The Doctrine was an articulation of U.S. policy in the Western Hemisphere. Said policy stood against colonization and intervention by the European powers. According to the Doctrine, the U.S. would not entangle itself in European affairs, and expected Europeans to not entangle themselves in American affairs.

The policy reveals a U.S. attitude of ignorance and condescension toward Latin America.

To quote from the original: “American continents, by the free and independent condition which they have assumed and maintained, are henceforth not to be considered as subjects for future colonization by any European powers.” Adams was referring to contemporary British and Russian activity on the northwest coast, as well as Spain’s attempt to keep its hold on South America in the midst of a continent-wide independence movement.

The policy—it would be called a doctrine later—was part of Monroe’s seventh annual message to Congress. “For the most part, Europeans expressed scant interest in the Monroe Doctrine,” writes historian Mark T. Gilderhus.

The Doctrine “receded into the background for most Americans during the remainder of the nineteenth century.” Eight decades later, in the aftermath of the Spanish-American War, President Theodore Roosevelt reformulated the Doctrine. It would now be used to police, with a “big stick,” the continent for America’s burgeoning empire. In the early decades of the twentieth century, the U.S. engaged in numerous political and military interventions in Central and South America, occupying some countries like Haiti and Cuba for years.

Under President Franklin D. Roosevelt, foreign policy towards Latin America became much less bellicose, and rebranded as the Good Neighbor Policy. The main principle was still one of non-intervention with Latin America’s domestic affairs. But, as Gilderhus writes, “In effect, FDR gave up the right of intervention, self-proclaimed by his cousin Theodore, in return for new commercial opportunities gained through the negotiation of reciprocal trade agreements.”

Gilderhus suggests that the Monroe Doctrine has always been about serving the self-interest of the United States. The different ways in which the policy has been interpreted have echoed “the oscillations in U.S. policy between coercion and cooperation and intervention and nonintervention.” He also notes that the policy reveals a U.S. attitude of ignorance and condescension toward Latin America.

It’s no wonder, writes Gilderhus, “that so many Latin American radicals and nationalists historically have looked upon the United States as their natural enemy.”

John Bolton’s statement may signal a return to military intervention in Venezuela. Or it may just be a threat. Either way, history shows us there are a lot of ways of interpreting the phrase “Monroe Doctrine.”

The Monroe Doctrine: Meanings and Implications
By: Mark T. Gilderhus
Presidential Studies Quarterly, Vol. 36, No. 1, Presidential Doctrines (Mar., 2006), pp. 5-16
Wiley on behalf of the Center for the Study of the Presidency and Congress