Would you want to be able to talk to a loved one after they’d passed away, knowing it wasn’t really them? Would it help? Would it hurt? Science, philosophy and religion alike have all grappled with grief; its cause, purpose, and cure. After years of inquiry and investigation, we’re not far from where we started.

The dystopian hit series Black Mirror foreshadowed how we might attempt to outsmart death using our love of technology. Season 2 of the show features a woman who loses her partner in a car accident. She gets the chance to talk to him through an messaging program designed to respond like him, then later, through living with a robot built to look exactly like him. But the robot, while eerily similar, cannot entirely recapture her partner’s human quirks and feelings, marooning her in the limbo of not losing him enough to let go, while simultaneously never getting him back.

A woman who lost her friend has rebuilt him as a chatbot; using his social media and old text messages, she can now talk to him through an app.

The show provokes interesting discussion. Would you want to be able to talk to a loved one after they’d passed away, knowing it wasn’t really them? Would it help? Would it hurt?

Until now, these seemed like distant hypotheticals. But recently, a woman named Eugenia Kuyda took the idea from theory into practice. Kuyda lost her best friend, Roman Mazurenko, and rebuilt him as a chatbot; using his social media and old text messages, she can now talk to “Roman” through an app.

Roman’s app version is said to be uncannily like him, mimicking his phrases and sense of humor. Some of his friends and family have embraced it. Others refuse to use it.

There are many models of grief, from Kübler-Ross’s five stages of grief (denial, anger, bargaining, depression and acceptance), to Kries and Pattie’s three stages (shock, suffering and recovery), to Parkes’ four stages (numbness, pining, depression, recovery). All share the idea of refusal to accept the reality of the loss, a sense that what has been taken is rightfully yours and needs to be returned. Parkes in particular describes “an urge to search for and find the lost person.” (Indeed, as James Dean notes, “bereavement” comes from the Old English, meaning “robbed.”)

Yet, essential to moving on is passing through that stage. Bill Flatt defines detachment as one of the key stages in processing grief; that is, “One needs to become more detached from the deceased. This does not mean less love, but it does mean less preoccupation with the deceased.”

Recognizing the extent of loss and learning to live with it is an essential part of healing. We’d likely not encourage the grieving to spend time talking to old photos or dining with a mannequin donning their loved one’s favorite sweater. Is this too far off from using code as a stand-in for a person? Although more convincing, an app is no more an authentic reconstruction of a person than a mannequin.

Flatt might contend that although there is some use in Kuyda’s app as temporary comfort in the most acute grief, it has limited power long term. One must realize, advises Flatt, “that life must proceed.” 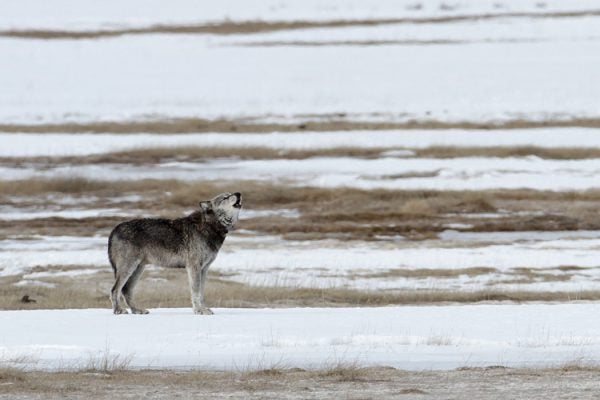 Gray wolves in Wyoming recently lost their protected status. What will become of a species burdened by myths about its "fierce and furious" nature?