Gray wolves in Wyoming recently lost their protected status. What will become of a species burdened by myths about its “fierce and furious” nature? 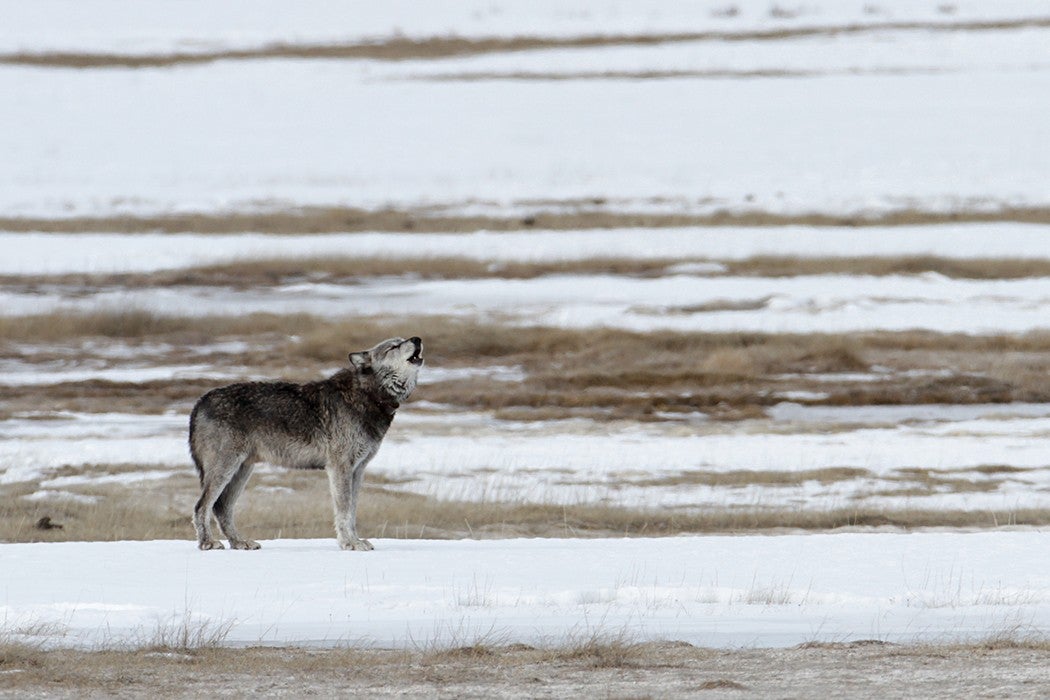 Pull over at a gas station in Jackson Hole or Yellowstone National Park, in Wyoming, and you’ll find T-shirts, key chains, and stickers imprinted with wolves howling at a glowing moon or staring on with something akin to wisdom. Travel to any of the small towns within a 100-mile radius of those tourist destinations and you’ll find wolf memorabilia with a radically different message. “Smoke a pack a day,” one common bumper sticker advises above crosshairs trained on a wolf. Another simply states, “No wolves,” next to a crossed-out wolf silhouette.

In 2012, the gray wolf was removed from the endangered species list, and Wyoming passed a law allowing people outside Yellowstone to hunt and kill wolves as they pleased, provided that they report wolf kills to the Game & Fish Department. In December 2011, an estimated 328 wolves inhabited Wyoming. The 2012 hunting law was designed to slash that number by more than two-thirds.

Two years later, wolves in Wyoming were returned to the list of endangered and threatened animals when U.S. District Judge Amy Berman Jackson transferred wolf management from state to federal hands. Her ruling concluded that the U.S. Fish & Wildlife Service’s decision to allow Wyoming—a state whose government has deep ties to the ranching industry—to permit open wolf hunting was rash and irresponsible. Along with conservation groups, Judge Berman Jackson didn’t think that wolf populations in the Cowboy State had recovered enough to endure open hunting.

Adding yet another wrinkle to wolves’ fraught story of reintroduction in Wyoming, the D.C. Circuit Court of Appeals reversed Judge Berman Jackson’s decision on March 3, 2017, again leaving Wyoming to handle its own wolf population. The state will likely put a plan similar to the 2012 call for open hunting into action, allowing hunters outside Yellowstone and throughout most of the state to kill wolves without a permit.

* * *
The wolf, perhaps more than any other mammal in North America, has been burdened by the mythology that we’ve imposed upon it. As the late-nineteenth-century thinker M.D. Learned sees it, negative perceptions of the wolf stem from ancient times, when the creature was “the most fierce and furious of all the enemies of man in the animal kingdom.” Learned argues that depictions “of the wolf as an all-devouring monster” in European mythology are “a development from the natural circumstances of hostility [that once existed] between the wolf and man.” Even as humans became increasingly powerful, and therefore insulated from any real threat wolves could pose, those ancient fears were reinforced by fairy tales and other forms of narrative in Christian and European cultures. When white settlers moved to the western United States during the 1800s and 1900s, that mythology helped to fuel a war against the wolf.

Reintroduction of the wolf presented a rare opportunity to ease the guilt of living on colonized territory.

Americans ravaged buffalo populations in the West throughout the 1800s, also killing copious amounts of deer, elk, antelope (technically called a pronghorn), and moose. Forced to find alternative sources of food, wolves increasingly preyed upon livestock. To ranchers across Wyoming, Colorado, Utah, Montana, and Idaho, the wolf became the enemy, and that hatred has been staunchly preserved. Stories like “Little Red Riding Hood” and biblical turns of phrase such as “a wolf in sheep’s clothing” have long perpetuated ideas of the wolf as a dangerous and deceptive creature. Ranchers’ need to protect their livelihood combined with deep-rooted myths of the wolf as an inherently evil creature eventually mutated the goal of protecting cows and sheep into a widespread obsession with annihilating the gray wolf.

Western stockmen’s associations offered bounties for wolves throughout the early 1900s. Hunters and ranchers placed strychnine tablets in deer, elk, and antelope carcasses to poison the wolves that fed on them. Some ranchers even set small swaths of land ablaze to kill wolves. In 1919, the U.S. Biological Survey and National Park Service set up wolf hunting camps across the West, encouraging hunters and ranchers to use steel traps in addition to poison.

Echoing many Americans’ feelings about the wolf, Teddy Roosevelt publicly denounced the animal, calling it a wasteful beast that kills indiscriminately and abandons its prey to rot. The wolf population in the West declined at a staggering rate. By the 1940s, wolf sightings in the Rocky Mountain states were rare.

Over the course of the next 50 years, deer, elk, and antelope populations in Wyoming exploded. Without the burden of having to avoid wolves, those herbivores expanded their grazing areas and started to decimate aspens, willows, and other plant life. In an effort to repair that damage, and after a years-long process of getting the measure approved by Congress, the U.S. Fish & Wildlife Service teamed up with Canadian biologists to capture gray wolves in Canada and relocate them to Yellowstone.

Humans are rarely driven by science alone, however. Some saw the wolf as a symbol for the lost wilderness, imposing a different mythology on the creature. Considering how drastically white settlers had altered the land, it makes sense that people would want to return the West to its original splendor. Reintroduction of the wolf presented a rare opportunity to ease the guilt of living on colonized territory.

The nuances of wolf reintroduction and its impact upon ecosystems get swept away by myths surrounding the animal.

As with conceptions of the wolf as an evil monster, modern views of the animal as independent and loyal have been shaped by ancient myths. Folklorist Namu Jila examines how old tales passed through Central Asia have influenced the way people see the wolf today. In one story told by the Wusun, an exiled child is rescued by a wolf that nourishes and raises him as one of its own. Tales of children raised by wolves have been passed on in cultures throughout the world, creating perceptions of the wolf that also feed into ideas of nature as a benevolent provider.

Although glorification of the wolf might have played a part in its reintroduction, many researchers agree that relocated wolves in Wyoming have positively impacted their surroundings. After initially feasting on large prey (they mostly hunt elk), wolves leave varying portions of the carcass behind, returning to kill sites over the course of several days. Those carcasses become food for scavengers, such as hawks, eagles, and coyotes. Grizzlies near Yellowstone also started to steal prey from wolves, providing the bears with a crucial source of food during sparse years. As deer, elk, and antelope reduced their grazing areas to avoid wolves, aspens and willows began to regenerate.

But complicating those positive outcomes has been a general uncertainty among scientists about the ways in which alterations in deer, antelope, and elk grazing patterns will affect Wyoming in the long-term. With wolves around, smaller amounts of elk calves survive into adulthood. Compared to adult elk, which can defend themselves (and even kill wolves with their large hooves), calves are easy prey, especially if separated from the herd. Countless Wyoming hunters feed their families with elk meat. Predictably, they see lower elk populations as a bad thing.

Multiple scientists have also challenged ideas about wolves’ positive impact on Wyoming ecosystems. In a 2009 study, the ecologists Scott Creel and David Christianson contend that elk’s reduced consumption of willow trees “was more strongly affected by snow conditions than by the presence of wolves.” The scientists Matthew Kauffman, Jedediah Brodie, and Erik Jules also refute the notion that wolves played a central role in helping Yellowstone aspen trees to recover in their 2010 article. That study also concludes that “aspen are not currently recovering in Yellowstone, even in the presence of a large wolf population.” (Other scientists have gone on to disagree with Kauffman, Brodie, and Jules’s findings, publishing scholarly refutations of that study.)

Unfortunately, the nuances of wolf reintroduction and its impact upon ecosystems get swept away by myths surrounding the animal. Like Teddy Roosevelt, many Wyomingites see the animal as wasteful and bloodthirsty. Ranchers in the state have more logical reasons for opposing wolf reintroduction. However, from 1999 to 2010, wolves in Wyoming only killed 418 sheep and 474 cows. (In 2010, an estimated 1.3 million cows and 375,000 sheep resided there.)

Needless to say, the myth-influenced mentality of seeing the wolf as a malevolent force is alive and well in Wyoming. On the other side of the coin are people who praise the wolf as a savior for the lost West, many of whom aren’t willing to consider a full, detailed picture of recent changes in Yellowstone’s ecosystem—and wolves’ actual role therein.

* * *
When I lived in Wyoming, my dad would periodically come home with a coyote he’d shot on his way home from work, or while he was out deer hunting. You don’t need a license to kill coyotes in Wyoming, and people like my dad see it as a favor to ranchers. He’d throw the carcasses in the trash can next to our house.

For countless Wyomingites, coyotes are pests. They view the animal in the same light in which city dwellers see rats and cockroaches. Wolves fall into the same category for a lot of Wyoming’s inhabitants and governing officials. To them, it makes no sense to protect an animal that makes life harder for ranchers.

But it would be folly to believe that deep-rooted myths about the wolf didn’t play a role in the recent decision to strip the animal of federal protection. Considering how long wolves have lived in Wyoming, the 20-plus years since wolf reintroduction seems like a blip—not a long enough period of time to fully understand how a higher wolf population will influence wildlife and ecosystems in the state. In a place where surviving on the land is still a reality for many people, myths of the wolf’s deviance occlude any objective view of the animal. 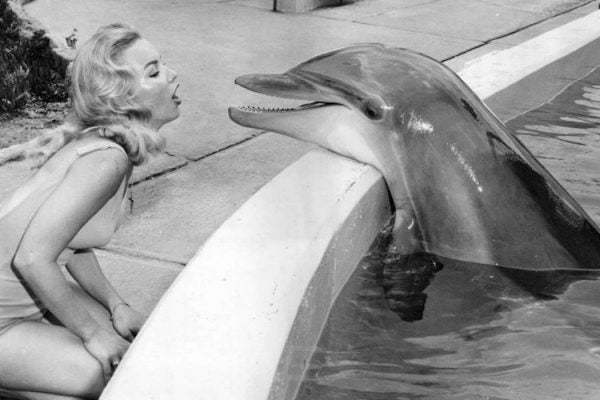 Why Don’t We Consider Fish Worth Saving?

Until recently, Americans did not generally consider fish to be wildlife. As a result, conservation measures for them got a late start.