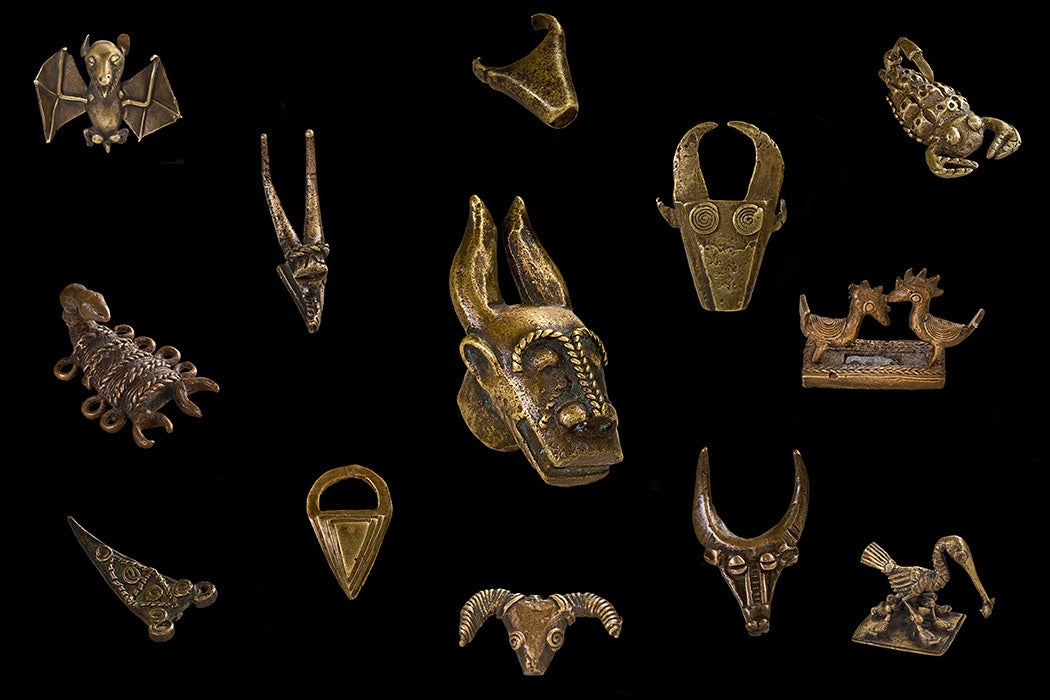 Say you’re in Kumasi, the capital of the Asante Empire, circa 1800, and you want to buy something. I hope you brought your scales! Trade at that time and place wasn’t conducted with coins, but with gold dust. Using gold dust allowed for greater flexibility in transactions, but it also meant that the transactions required a great deal of expertise. Both buyer and seller would bring a pair of scales and a set of weights, negotiating until they were able to weigh out a fair price. As one account notes, even a “ha’porth of bananas” would be purchased with a few tiny grains of gold “placed like a dose of morphia on the point of a knife.”

The smallest scales were known as “wind scales,” since they were so delicate that the slightest breeze could disrupt them. You had to be careful not to sneeze during the measuring process, so as not to send the grains of gold flying; any gold that fell on the ground automatically became property of the Asante state, to be swept up and spent in times of crisis.

Going to market required a futuo, a bag devoted to carrying the implements of economic life: assorted weights, brushes, scoops, scales, and boxes for transporting gold dust. Learning to use and care for these implements was an important part of growing up, and taking care of the futuo was the responsibility of the head of the household. Some people had more than one futuo, in fact—a small, portable one for everyday items and a larger one for high-ticket purchases. If they couldn’t afford the expensive implements, they might weigh out their purchases with buttons or grains of rice.

One sign of an authentic weight is that a bit has been filed off after casting in order to correct the weight.

Spilling out the contents of a well-stocked futuo, you’d find an astonishing miscellany of little figures: chameleons, lions, mudfish, and scorpions; miniature drummers, kings, hunters, and executioners; geometric blocks adorned with stripes and swirls; sandals, looms, shields, and gameboards; perfect replicas of bird’s feet, peanuts, and crab claws, all rendered in gleaming brass. These were the mrammuo, or weights (sing. abrammuo).

Looking at pictures of mrammuo, it’s hard to grasp their scale. The level of detail makes them seem much larger than they really are, but most are just a bit larger than a Monopoly piece. Tiny, intricate, and precise, crafting these miniature sculptures required serious skill; the artisans needed to get the weights exactly right so they could be used for trading. One sign of an authentic weight is that a bit has been filed off after casting in order to correct the weight.

But there’s more to these tiny works of art than their measurements. They also sent messages. To those in the know, each design suggested a reference to a proverb. Consider a pair of conjoined crocodiles: two heads, two tails, but only one stomach, demonstrating that “two crocodiles have one common stomach, but when they are eating, they fight over the food.” In other words, while all the members of a family may have the same interests, it won’t stop them from squabbling.

There’s a reason proverbs were the chosen inspiration for these figures. Proverbs, in Akan culture, were long considered essential to skillful communication. As researcher Benjamina Efua Dadzie recalls of her childhood in Ghana,

As a child and a young adult, I spent a lot of time with the elders in my family, for both mundane activities such as cooking, and more serious business such as funerary rites and performances. I would ask a lot of questions, curious about the ways in which they twisted and turned our Akan language into proverbs to sharply communicate their joys, displeasures, and struggles; as well as to conceal statements that I was not supposed to hear or that were too heavy to say in plain language.

With proverbs, you can delicately hint at matters that might otherwise offend your listeners. You can call on history and common knowledge to make your point more persuasive. And you can suggest respect for your listeners. (“We speak to a wise man in proverbs, not in plain language.”) As another proverb puts it, speech without proverbs is “not completely sweet.”

Understanding the proverbs each weight referred to was an important part of learning how to use them. Considering this connection, some scholars have suggested that an abrammuo could serve as a kind of coded communication—perhaps a subtle way of hinting to the trader that you think they’re asking too much, for instance.

But to others, like anthropologist Georges Niangoran-Bouah, the meaning went much deeper: mrammuo resembled “a kind of encyclopedia written in miniature figures,” a repository of cultural wisdom “comparable to the Christian Bible, the Islamic Qurān, or the Hindu Veda.” In his estimation, the consideration of these objects by European scholars as simply “weights” elides their true significance.

Sadly, much of this knowledge has been lost. The late 1800s saw continual conflict between the British empire and the Asante. In 1896, King Prempeh I was forced into exile by the British. That same year, the British colonial government outlawed the use of mrammuo. That complex system, an indispensable part of everyday life in the Asante Empire, was lost. But the proverbs remain, passed down from one generation to the next, to shed some light on the meaning of these small treasures.