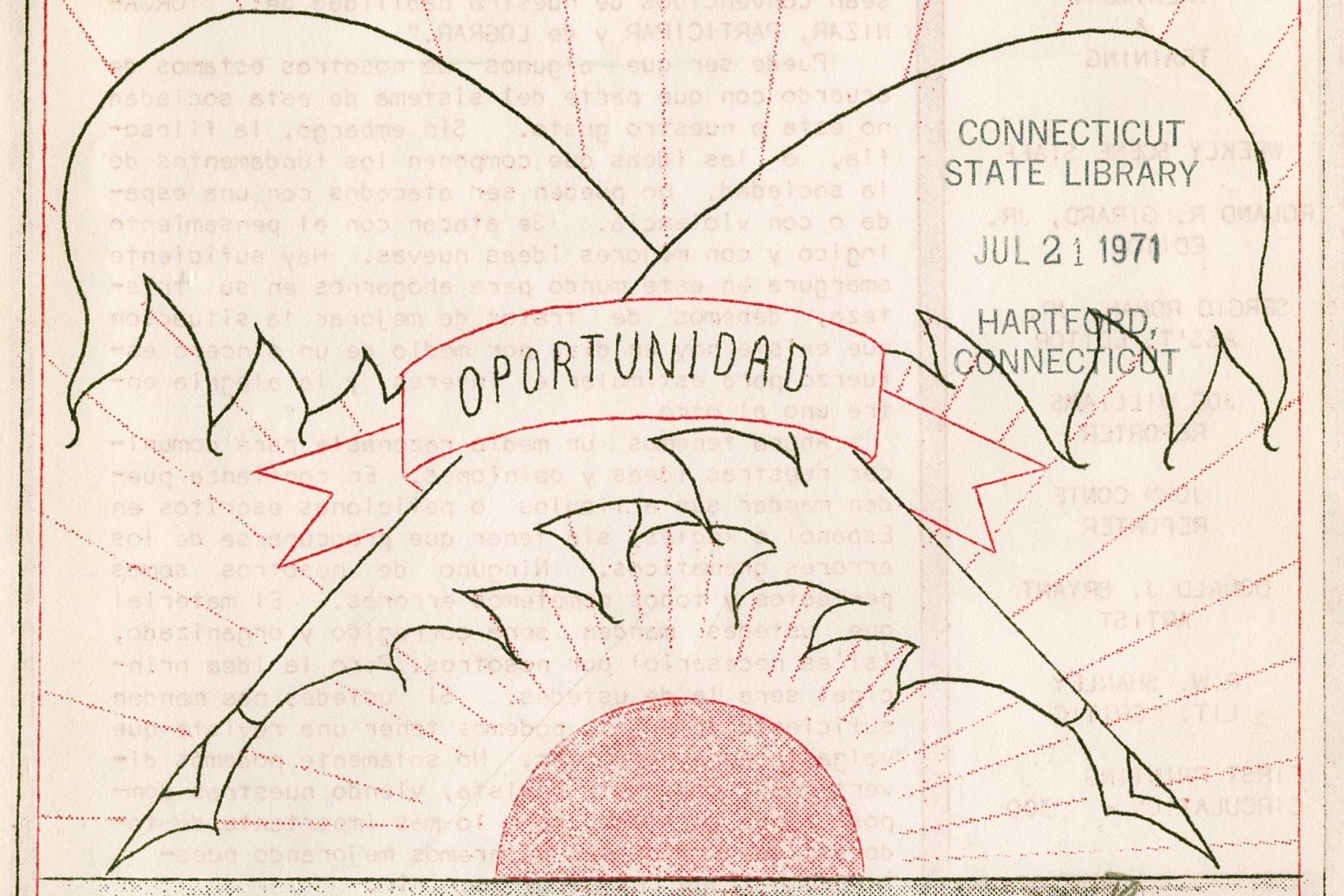 Prison newspapers have the power to challenge official narratives or question the often-demeaning conditions of incarceration. This can make them prime targets for censorship. But prison newspapers don’t only represent information; they also create a space for communal and individual self-expression. “The newspaper is vital inside,” says Robert McCain, a storyteller, artist, and former prison journalist and editor. “The newspaper is the pulse of the prison.”

Most anything that threatens the hegemony of prison authority is perceived as a threat in need of controlling. To maintain this vital mode of communication, incarcerated contributors to prison newspapers employ creative means of circumnavigating censorship.

During his four decades incarcerated, McCain was a “shot caller,” someone entrusted with leadership as the head of their crew, or social faction, who would at times act as a spokesperson for conflict mediation or other inter-group exchanges. “We would use the newspaper in the same way,” McCain says. “If we needed to get a message out, we’d go to the newspaper, or we’d write an article and put it out.” This sort of resolution-prone communication, however well-intentioned, was no less immune to the surveillance of censorship. McCain, who is also a poet, recalls publishing his writing in response to particularly tense situations. “If there was a lot of racial tension or a lot of violence going on, we’d do some poetry… to dissuade people from being so miserable and violent.” The poetry functioned, in contrast to strict journalistic styles of reporting, as both a “lighthearted” way to address the incarcerated community in high-stakes situations, and as a tool for navigating authoritative editing.

“You have to learn how to use [the paper] in a way that the staff advisor they’ve assigned to you isn’t red-lining everything you write down,” McCain says, further explaining that “inside the newspaper there’s an underground—the underground is the poetry and the art.”

Hogan exemplifies how, as a tool for introspection, poetry provides an interesting analogy for navigating authority.

Under-their-radar, behind-their-back, over-their-head, under-their-ground—they’re all metaphors for the ways in which prison publications can navigate systems of censorship and control to maintain editorial, creative, and journalistic integrity. Incarcerated writer and poet Michael Hogan expresses this sense of (re)claimed autonomy in his contribution to a 1976 issue of American Poetry Review. “There were certain things within my control,” he writes, and goes on to say that through poetry, “I was controlling them.” After entering a poetry workshop in prison, he felt he was accessing a new perspective on life and on his incarceration. An early poem reflects what he describes as this “turning point”:

We name a thing and then we know it,
take possession and make it ours.
Poverty, I name you “freedom”
and I am free.

Hogan exemplifies how, as a tool for introspection, poetry provides an interesting analogy for navigating authority in that it offers the potential power to loosen the strongly held impasses one confronts within themselves.

In a more concrete way, of course, the overseers of prison publications are authoritarian arbiters of information, deciding what does or doesn’t make it to print. In McCain’s experience, the people who had the final say were prison staff members, rife with authority. This meant that the ultimate decision on what to publish was left up to someone who did not have “their finger on the pulse of the inmate population.” This motivated him and his team “to find those nooks and crannies where you can get around” the oversight of the specific state-appointed editor—who doubled as a censor. In the papers he worked on, the spaces for these subversions would be forged with cleverly created cartoons and comics, poetry, and artwork.

Visual media, for McCain, was an especially powerful tool for communication. “You’d write a paragraph or something and then you might drop in a little piece of art, maybe a 1-inch by 1-inch something that you drew,” he recalls. “And you would use them as guideposts.” By strategically placing visuals amidst more traditional journalism (which for McCain’s writing included reporting on timely changes to legislation affecting incarcerated people) he would capture the attention of incarcerated peers and guide them to topical content. “Prison is segregated, but everybody reads the paper,” he says. “It’s the number-one vehicle, the best vessel, to get [to] the population… [And] if we’re not talking to each other,” he asserts, “we’re real simple to control.” In other words, the newspapers were necessary to maintaining senses of both autonomy and community—anathemas to the system’s assertions of mass authority.

McCain recalls one particularly impressive instance of successfully navigating the harsh censorship of the papers. He was reporting on Corcraft, the employment program that is part of New York State’s “Industry” division of its Department of Corrections and Community Services (Corcraft utilizes a labor model which has been compared to the ersatz employment systems of post-emancipation slavery). “They were making a bunch of changes that were affecting us,” McCain says. “They were cutting our pay, they took the showers out… So what we did was wrote some poetry and [published] some artwork about Corcraft that was humorous. And we sent that all over the state.”

The humor, McCain notes, was exercised in a way that usurped the superintendent’s oversight of its embedded criticism. A deft use of irony acted as a deflecting measure, that nonetheless got the word out about the pertinent news (crucially, the papers are one of the very few ways to transfer news facility-to-facility). Hear ye, hear ye, the artwork-reporting seemed to say; Corcraft is screwing us all.

Many examples of how irony works can be found in the APN collection. For example, irony does a splendid job of masking frustration with levity. “We are compelled to report three very serious cases of ‘Pardonitis’ among the girls,” reports a 1939 edition of Idaho State Prison’s Wall City Bulletin, in its insert from the facility’s women’s ward. “It seems that nothing the doctor can prescribe will relieve the terrible heartache and suffering that is peculiar to this dread disease.”

Cloaked as reporting, this snippet is in fact a dire commentary alluding to the writers’ emotional turmoil. “Should the Pardon Board at their meeting… vote the release of those afflicted, an immediate cure will be effected.” Here, the traditional reporting style and tone is used ironically, less for the sake of outwitting a censorship board, and more for publicizing the painful reality of incarceration-in-limbo. “Lead [readers] to what the message needed to be,” McCain reiterates of these types of psuedo-formal journalistic conventions in the newspapers. It all “was poignant,” he says. This media, writing and visuals alike, “told a story.”

In the above 1972 two-page comic, an officer takes a snowball to the head, turning around in a fury only to unleash his wrath on an innocent man passing by. To the side, the viewer sees the offender, sneakily poking out behind a ledge, smirking while observing the other man being blamed for his chilly assault.

In a holiday edition of the paper later that year, a six-panel comic shows a Yuletide-spirited officer handing out and lighting cigars for the incarcerated population. A wily hand creeps into frame, emptying the cigar box of its contents while the officer’s back is turned; blame, of course, falls on the innocent prisoner in his line of sight. The commentaries embedded within these comics reflect the unfairness of prosecution not only within the interpersonal power relations in prisons, but also within the authority of the penal system at large. The comics thus offer tacit reminders that innocence and punishment are relative.

Of the comics and illustrations he produced for the papers, McCain emphasizes that “they were instructional. They had a purpose to them.” He recounts a series of comics he made depicting a man “standing behind a phone booth in a mask, looking out from around the booth,” and another with a cartoon character “talking on the phone… with the line cut.” The message being, “be careful what you say, they’re recording you.” It was a clandestine warning that the prison administration surely wouldn’t want publicized—the very subject matter McCain was otherwise used to finding on the cutting room floor.

Levels of censorship vary between publications, however, so what is and isn’t “permitted,” whether explicitly or implicitly, cannot be generalized across states or facilities. In a particularly illustrative exchange prompted by a Letter-to-the-Editor in a 1981 publication of Arizona State Prison’s La Roca (with issues published between 1974 and 1992), the editor of Que Paso, a prison publication out of Fort Worth, Texas, writes:

We the staff… applaud your outstanding efforts in free speech communication. I have noticed a few similarities in views, such as the “X” TV movies… which we cannot even mention in our publication due to stringent censorship by untutored and spineless bureaucratic sympathizers… I have found it very difficult to create a publication worthy of reading due to our censorship.

A 1968 call-for-contributions from an editor at The Bridge, which published at least between 1961 and 1971 out of Connecticut State Prison, also reflects the unpredictability of editorial oversight between different facilities. “It can be just about any subject you choose,” reads the request, “and you can write in a positive or negative vein. Just use a little discretion. We editors have guidelines we must follow.” The editor goes on to remind submitters of the tenuous balance between editorial freedom and constraint. “We are responsible to the man for what we publish,” he writes.

Prison newspapers host dialogue and critical thinking not only through their strict reportage, but also through their more artistic expressions and creative subversions of censorship. Poetry is particularly useful for lodging veiled criticisms at the man. In its invitation of abstraction, not only can it evade censorship, but writers may feel more comfortable expressing themselves impressionistically.

“Justice denied,” Carmen Arey begins, in a poem in a 2006 edition of Long Line Writer (with issues published from 1980 to 2006 out of Arkansas Cummins Unit penitentiary).

Justice denied
Insanity cries
Humanity deprived
Society is blind
To the mad houses
They hide…
The blind believe in justice
The others know the truth
There is no scale that’s truly fair.

Arey’s poignant expressions of both personal and communal themes may have particular resonance in a space where exchanges are so tightly controlled. They also exemplify how prison newspapers’ power to communicate represents a threat to the system’s presiding censorship. Yet, in this threat resides a tableau of human right—an empowerment to organize, to freely speak, to circulate thought and, through expression and exchange, the chance to resurrect a sense of freedom. 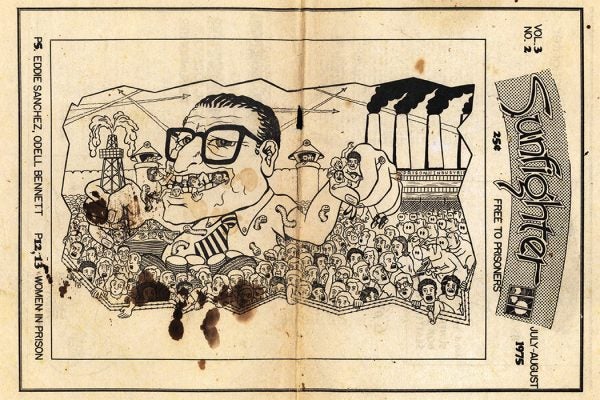 A Poem on Freedom by Ho Chi Minh

Published in Sunfighter in the summer of 1975, "Nothing is More Precious than Freedom..." holds obvious allure for those who are incarcerated.