It’s an exciting time for Yiddish scholarship. The YIVO Institute for Jewish Research has announced the start of its YIVO Vilna Project, a $5.25 million, 15-year endeavor to unite, at last, a collection of treasured documents that has been separated by an ocean for half a century . 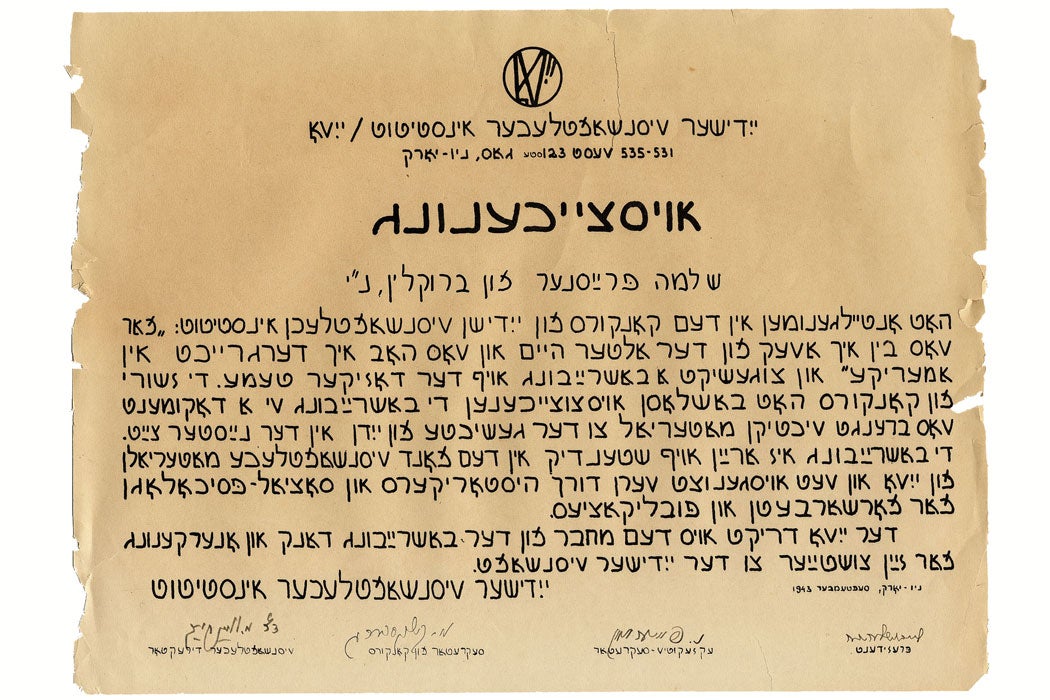 Certificate awarded to Shloyme Preisner of Brooklyn for participating in YIVO’s 1942 autobiography contest. The certificate notes that all manuscripts submitted to the contest will made available to historians and social psychologists for study and research.
via YIVO Institute for Jewish Research
By: Karen Rile
4 minutes
Share Tweet Email Print

It’s an exciting time for Yiddish scholarship. The YIVO Institute for Jewish Research has announced the start of its YIVO Vilna Project, a $5.25 million, 15-year endeavor to unite, at long last, a collection of treasured documents that has been separated by an ocean for half a century .

The newly combined archive—half in New York, half in Vilnius, Lithuania—will include 10,000 rare or unique publications and plenty of primary sources: 1.5 million letters, memoirs, and photographs that were rescued when the Nazis ransacked YIVO’s Vilna archive, murdering most of its scholars and students, in 1941. After the Nazi raids, a portion of these documents were transplanted to YIVO’s new headquarters in New York with the help of the U.S. Army. Others were destroyed, and the rest, hidden for decades by Lithuanian librarians, resurfaced in 1989.

“This is is good news for scholars and profoundly gratifying to those who love and respect YIVO’s tradition of engaged Jewish scholarship,” says historian Daniel Soyer of Fordham University. “Since it was founded in Vilna in 1925, YIVO has been a nearly inexhaustible source of both information and inspiration concerning the history and culture of Eastern European Jews in Eastern Europe, America, and elsewhere. There is no other collection like it for its depth and scope.”

Autobiography and memoir—Yiddish-language records of the everyday lives of pre-war citizens in their own words—are an integral part of the YIVO Vilna collection. These documents offer the kind of frank and introspective details about ordinary life that are unavailable in polished works by professional writers. In the 1930’s YIVO sponsored contests for Jewish youth in Poland to write autobiographies documenting their daily lives. These first-person accounts provide a window into a culture now lost. About 300 of the original 627 autobiographies survived.

Continuing in tradition of sponsoring autobiography contest, newly-emigrated YIVO scholars in New York held a 1942 essay contest on the theme “Why I left Europe and what I have accomplished in America.” Over 200 recent immigrants responded, generating 25,000 document pages, mostly in Yiddish, with material covering all aspects of their lives, both in the old country and the new.

But, for decades, nothing much was done with the collected memoirs.

In his 1999 article about the autobiography contests, “Documenting Immigrant Lives at an Immigrant Institution“, Professor Soyer, author of My Future is in America: Autobiographies of Eastern European Jewish Immigrants (2008) points out that at the time of the 1942 contest YIVO was itself an immigrant institution, having recently relocated to New York from Vilna. The scholars who launched the autobiography contest were still struggling to find a niche in their adopted country. In the end, and despite their great effort collecting this material, they made scant use of the autobiographies during their own careers. The autobiographies remained almost untouched for subsequent decades, their importance marginalized by younger, non-Yiddish-speaking scholars who relied on oral histories mostly in English.

And that is changing. The future for Yiddish scholarship is now, according to YIVO scholars. One of the YIVO Vilna Projects objectives, and an essential part of YIVO’s mission as a whole, is to  support its resurgence.

Soyer, a longtime student of the archives and the autobiographical tradition is enthused. In his 1999 essay he suggested that the significance of the autobiography contests lay not only in the documentation they produced but also in their power to bring younger scholars into Yivo’s orbit and to connect them to a new form of Jewish intellectual life.

Today he writes, “That some of the long lost remnants of the Vilna collection will be virtually reunited with the main body of material in New York and made digitally available to researchers is good news for scholars and profoundly gratifying to those who love and respect YIVO’s tradition of engaged Jewish scholarship.”

“Yiddish was the everyday language of most Jews in the world before World War II,” says Roberta Newman, YIVO’s Director of Digital Initiatives. “This is why YIVO pioneered an intensive Yiddish-language learning program in 1968, which is still going strong today, attracting graduate students from all over the world.” Newman hopes that by publishing 1 million pages of these documents on the Internet YIVO and its partners in Lithuania will help revolutionize the study of Jewish history in Eastern Europe, making research more feasible for scholars all over the world while fostering the possibility for new insights and connections. 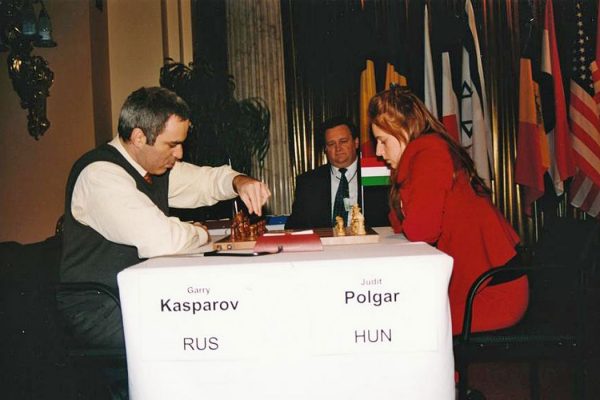