Throughout history, people tried to protect spaces from evil with apotropaic marks, ritual concealments, and other charms. 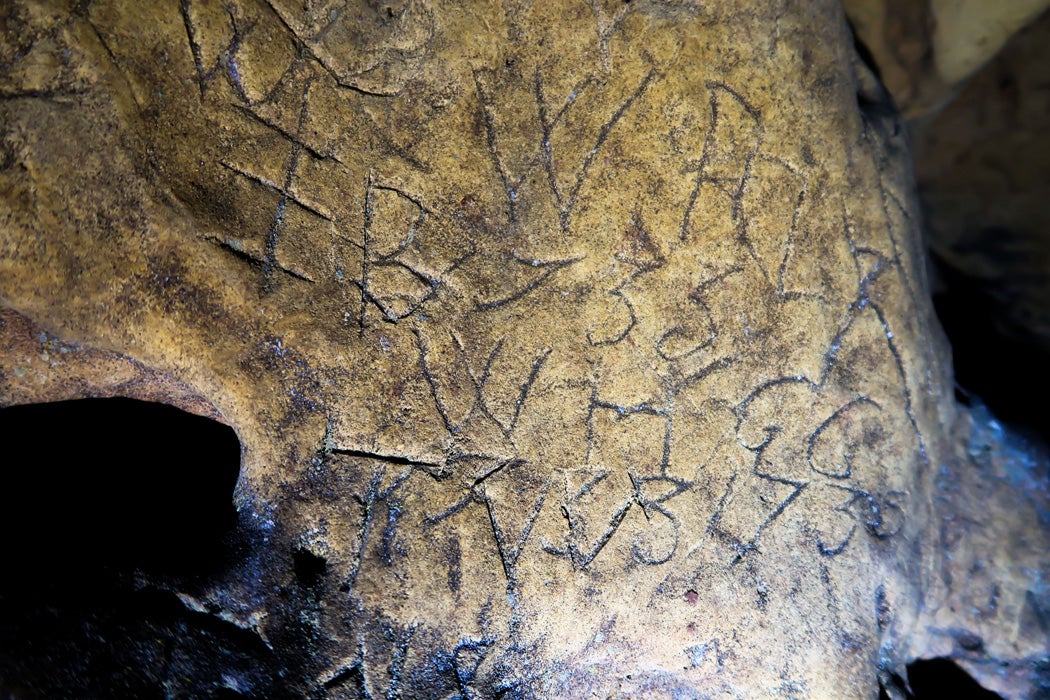 Markings carved in the Creswell Crags caves near Creswell, England, were long overlooked as idle graffiti. Then a couple of visitors noticed they had distinct formations. Hayley Clark and Ed Waters of the Subterranea Britannica society were on a recent cave tour when they recognized that these were witches’ marks, designed to ward off evil. A new tour of the caves highlights what’s believed to be one of the largest gatherings of ritual protection marks in the country.

Although these particular witches’ marks were ignored for years, these kinds of markings are not uncommon on medieval and early modern buildings in Great Britain. Most date from the sixteenth to eighteenth centuries, a time of heightened fear of witchcraft and the supernatural presence of evil. They are also known as “demon traps” or apotropaic marks, from the Greek apotrepein, “to turn away.” (“Witches’ marks” are not to be confused with “witch marks,” the physical marks on skin that supposedly proved a person was a witch and had fornicated with the devil.)

These protective marks can reflect moments of collective suspicion and a desire for safety against new threats.

Witches’ marks were architectural spells, cut or burned onto home entry points like windows, doorways, and fireplaces. “By the later 16th century iron firebacks were provided to radiate heat and prevent damage to the back wall,” writes architectural historian Timothy Easton in Historical Archaeology. As they became a standard home feature, they were often adorned with apotropaic marks such as “M” and “VV,” invoking protection from the “virgin of virgins,” the Virgin Mary. “These ‘Marian’ symbols are also some of the most common scribed letters to be found on hearth beams, doors, and around windows,” Easton notes.

Journalist Kate Ravilious writes that restoration of the Knole House, a fifteenth- to seventeenth-century country home in Kent, revealed witches’ marks on floor joists and by a fireplace. Ravilious writes:

The direction of the burn marks shows that the symbols were placed before the timber was laid, and tree-ring analysis dates the timbers to between 1605 and 1606 — around the time of the Gunpowder Plot, when conspirators (including Guy Fawkes) attempted to blow up Parliament and kill King James I.

In other words, these protective marks may reflect moments of collective suspicion and a desire for safety against new threats, whether political unrest, epidemics, or times of poor harvest.

Archaeologically, triads and multiples of threes manifest not only in witch-bottle contents [a countermagical device], but also frequently in the number of petals on apotropaic daisy wheels (also called hexafoils) found inscribed near structural thresholds, like doors and windows, on mile or boundary markers, and on gravestones.

Three circles were often burned onto rafters, while “the geometric triad, can be found repeatedly on hearth lintel supports called witch posts, gravestones, and mile markers.”

Similar to ritual concealments such as horse skulls placed under the floor, these marks were part of an ongoing folkloric belief in charms for everyday protection against the unknown. In Archaeology Ireland, archaeologist John Nicholl observes that the oldest home in Dublin—a seventeenth-century timber-framed house at No. 9/9a Aungier Street—has both apotropaic marks and ritual concealments, including a shoe. “The recovery of the shoe from the southwest room is of even greater significance given its association with the apotropaic marking on the floor joist from that room,” Nicholl writes. Both the shoe and the marks had protective purposes. He adds that “apotropaic markings like those found in No. 9/9a have also been found on personal possessions belonging to the crew of the Mary Rose, Henry VIII’s flagship, which sank in July 1545.”

Why so many witches’ marks were carved at the Creswell Crags limestone gorge remains a mystery, but it probably was linked to some local unease about the cave’s dark crevices. As Duncan Wilson, chief executive of Historic England, stated, “We can only speculate on what it was the people of Creswell feared might emerge from the underworld into these caves.”