Our columnist’s take on the future of the Internet and the importance of grassroots networks. 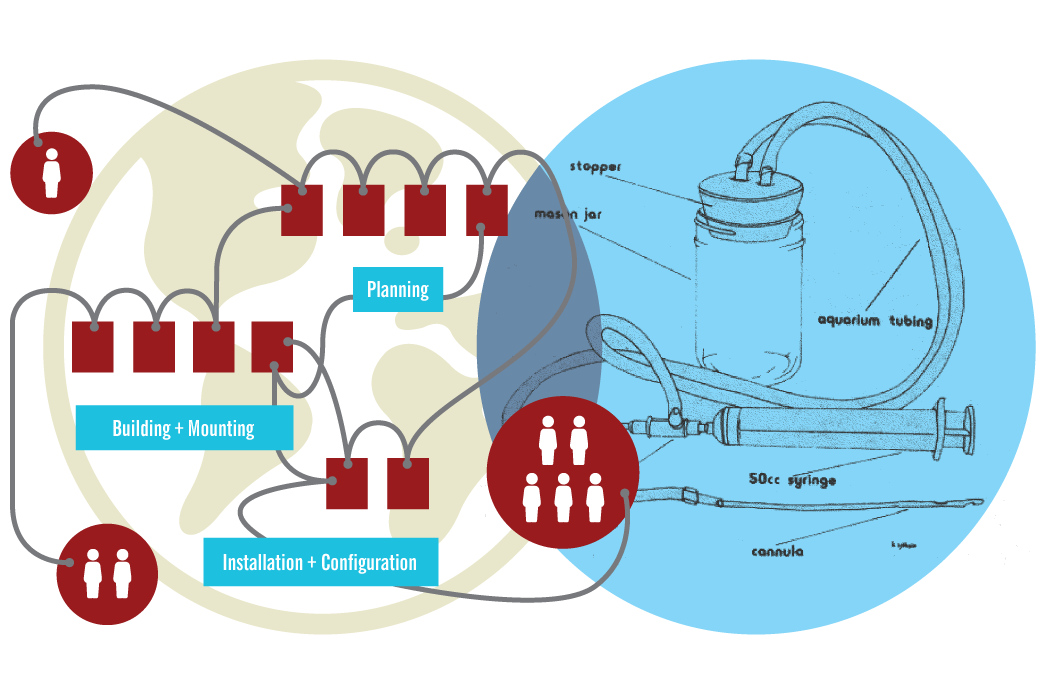 An adaptation of a networks diagram from Commotion Construction and a menstrual extractor illustration from Off Our Backs
The JSTOR Daily Design Team
By: Alexandra Samuel
7 minutes
Share Tweet Email Print

We live in an era of crisis. Hurricanes, wildfires, terrorist attacks: these headline-grabbers appear more and more often, as climate change accelerates the frequency of natural disasters, and as global fragmentation and conflict accelerate terrorism.

When we think about the risks these crises pose, we tend to focus on the impact they have on human life and personal property. But these crises can also have a profound effect on telecommunications infrastructure.

Did you fall asleep when I used the phrase “telecommunications infrastructure”? I know, it’s not the sexiest concept. But our ability to reach emergency responders, access life-saving information, and track down our friends and family largely depend on our ability to place a call or connect to the Internet. In a disaster, that connectivity can be one of the first things to go.

As a result, engineers, emergency planners, and first responders have all paid increasing attention to how we can preserve or restore connectivity in the event of a disaster. Based in part on recent experiences with Hurricane Katrina and the 2010 earthquake in Haiti, there’s a lot of interest in alternative networking technologies: not just satellite communications, but peer-to-peer networks, ham radio, and even making use of the smart devices that make up “the Internet of Things.”

Maybe I’ve lost you again. After all, most people don’t realize that their battery-powered, Bluetooth-enabled gadgets could actually be harnessed to build a peer-to-peer network in an emergency. Most people don’t know what a mesh network is: it’s a network that’s built by linking wireless devices together, creating a network that links local networks into one big network without going through a central “node” like a phone, cable or satellite company. Most people — even most geeks! — don’t even know how to use a ham radio.

And that’s a huge problem. Even if we don’t face a pandemic virus that targets the DNA of network-savvy engineers, we can’t count on having enough geeks to go around in the event of an emergency. We also can’t count on having enough of the hardware, or emergency power we need to keep a network running. And the geeks (and hardware) that are on hand need to focus on ensuring the connectivity of hospitals, crisis centers, and first responders: they can’t necessarily provide connectivity to all the households and individuals who want access, too.

Peer-to-peer networking expertise, and the hardware to go with it, offer protection from emergencies in which our very lives may depend on the ability to make a call or access online information.

I think we should radically expand the number of people who have the technical know-how, hardware, and emergency power to set up and sustain an peer-to-peer mesh network. If that sounds like a tall order—after all, most people can barely get a home network up and running without at least a couple of calls to Comcast tech support—it needn’t be. The hardware and power required to keep a network node running are not monumental, and the tech-know how required, while significant, are within reach of anyone who can follow written instructions. But it does require a broad, grassroots movement to teach people what they need to know.

Fortunately, we have a precedent for that kind of grassroots self-reliance: a long-standing, decentralized campaign that disseminated complex technical skills to a wide range of would-be self-helpers. It’s an improbable source of inspiration, and one that some people may find hesitate to borrow from. I’m talking about the movement for abortion rights, which taught women across the U.S. and around the world a technique known as “menstrual extraction.”

As described by Cindy Pearson in a 1992 interview with the feminist magazine Off Our Backs,

The idea of menstrual extraction is that a group of women who like the idea of self help, who are comfortable with and want to learn more about their bodies, do self cervical and vaginal exam, know their cycles, know the early signs of pregnancy, and meet somewhat regularly….[Some] will decide that they want to go into the next step of advanced self help, gather the equipment for menstrual extraction, and practice doing menstrual extraction on each other at the time their periods are due. Whether or not there’s a pregnancy or fertilized egg might not even be known amongst the women in this group, but they get used to the technology…They build up that expertise and knowledge about each other’s bodies and then they have it ready in case someone thinks she might be pregnant—her period’s late, she knows a condom broke or her diaphragm broke around the days when she thinks she was fertile—and they feel comfortable with trying to extract the woman’s period, or menses.

In her article, Immodest Witnessing, Michelle Murphy traces the roots of menstrual extraction to the radical feminist movement of the late 1960s and early 1970s, when “those in the feminist self-help movement set out to teach themselves the techniques of reproductive control.” Leading activists in the movement argued that abortion “was a relatively straightforward and safe procedure that laywomen, and not just doctors, could learn to do.” As Donna Haraway writes in The Virtual Speculum in the New World Order, these were “self-help and self-experimentation practices in a period in which abortion was still illegal and unsafe. The self-help groups developed techniques of menstrual extraction, i.e., early abortion, that could be practiced by women alone or with each other outside professional medical control.”

Long after Roe v. Wade, menstrual extraction was still practiced and advocated by some feminists, on the grounds that—as Pearson put it in 1992—“[i]t means that women won’t feel completely powerless in the face of possible state actions to restrict abortion or even make abortion illegal.” Menstrual extraction was seen as a way of protecting women from a worst-case scenario: a scenario in which abortion was only available through grassroots knowledge and communities.

We need a grassroots movement for disseminating networking knowledge that is just as ardent as the radical feminist movement of the 1960s and 1980s.

In a world where many of us not only rely on dialling 911 for emergencies, but would turn to Google for basic information on essential survival skills like water purification, the loss of Internet access is just such a worst-case scenario. Peer-to-peer networking expertise, and the hardware to go with it, offer protection from emergencies in which our very lives may depend on the ability to make a call or access online information.

That’s why we need a grassroots movement for disseminating networking knowledge that is just as ardent as the radical feminist movement of the 1960s and 1980s. Indeed, it needs to be a movement that is even broader: as both Murphy and Haraway note, the feminist self-help scene was dominated by white, middle-class, straight women, which is why the movement largely collapsed as these women got access to better, more woman-friendly healthcare. Particularly given the continued quasi-segregation of many neighborhoods by race, ethnicity, and sexuality, we won’t be able to build comprehensive networks (which depend on geographical proximity) unless people from a range of backgrounds participate in the grassroots networking movement.

There’s another benefit to this kind of self-sufficiency. It doesn’t necessarily take a natural disaster, war, or terrorist attack to compromise the kind of unfiltered Internet access that much of the developed world enjoys today. There are already many countries, like China and Saudi Arabia, that censor the Internet. And of course, there are many countries and communities in which connectivity is too expensive for most people, or simply unavailable.

The citizens of Western democracies can’t afford to smugly assume our own unfiltered, relatively inexpensive Internet is here to stay: a turn to authoritarianism isn’t the only potential threat to an open Internet. The war on net neutrality (the principle that says all Internet traffic should be treated equally, and routed at equal speeds), the crackdown on peer-to-peer content and data sharing (in the name of intellectual property protection), and even the rise of paywalls may dramatically limit our access to online information.

A citizenry that knows how to set up and sustain its own peer-to-peer network is a citizenry that can truly count on an open, accessible, and democratic Internet. As M. Chris Riley notes in his essay on the policy covering the allocation of the communications spectrum—the waves over which wireless communications travel—”mesh networks and alternative wireless infrastructures…can enable information flow despite censorship by physically avoiding the censored network pathways.” Mesh networks can also offer a low-cost networking option for communities that have yet to join the Internet era for economic reasons.

A movement to teach and learn how to set up peer-to-peer networks is the best way to ensure we have the ability to restore and sustain connectivity when it’s needed. Thanks to community access advocates like Commotion, we already have good documentation about how to go about creating this kind of network.

The example of menstrual extraction proves that it is possible to disseminate both the gear and expertise required for a moderately challenging form of self-help. What it takes is a small community of committed, knowledgeable people who are ready to teach, and a larger community of people who see the value in learning. It shouldn’t take a disaster for us to recognize the importance and urgency of acquiring that kind of knowledge in an Internet-dependent world. 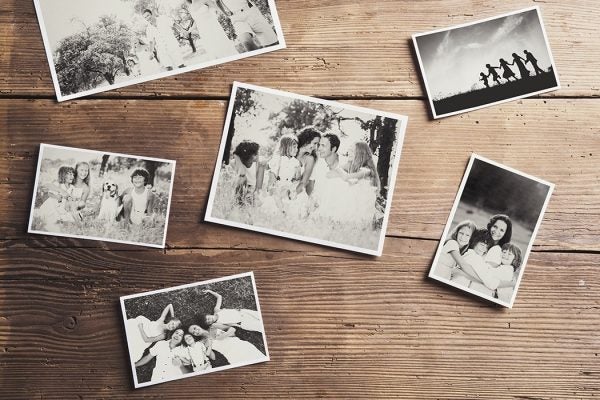 Neuroscientists have discovered how memory is stored–and backed up–in the brain.