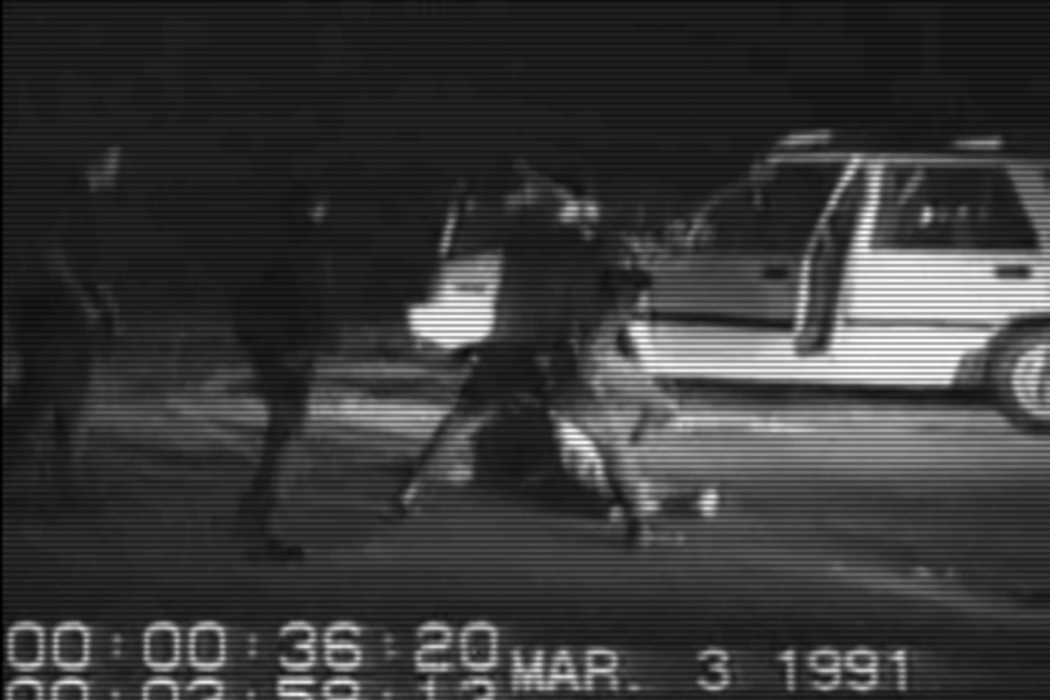 The grainy pictures speak for themselves. Or so thought many Americans who watched the video of the March 3rd, 1991, beating of motorist Rodney King by Los Angeles police officers. Sociologist Ronald N. Jacobs reviews the narrative of the event: King was speeding and was pursued by LAPD officers, eventually twenty-one in all. King was beaten by three of them, while the rest observed.

The famous video was taken by an amateur videographer who happened to be in the vicinity, and was sold to a local television station. In segments relentlessly shown on television, King was seen beaten all over his body, crouched in an apparent defensive position. Still photos of a beaten King in the hospital reinforced the narrative of a man who was brutalized by the police.

And yet different views of the beating emerged. Jacobs argues that the coverage in the largely African-American Los Angeles Sentinel was very different from that presented in the Los Angeles Times. For the Sentinel, King’s beating was part of a wider history that included frequent protests by black Angelenos against the LAPD in general and Daryl Gates, the department’s lead official, in particular. In this narrative, only the unified black community could effectively address the social injustice, of which the King beating was only one example, albeit an unusually-well-documented one.

In the King case, attorneys for the officers were able to frame what seemed to be an obvious reality to the casual viewer in an entirely different light.

For the Los Angeles Times, on the other hand, the beating was seen as an aberration. In this view, the police department was a generally responsible group that went momentarily astray.

Neither narrative prepared the wider public for what was to happen. More than a year after the beating, the officers seen on the video were acquitted. The outrage was loud and intense, culminating in the massive Los Angeles Riots (or L.A. Uprisings, as they have since become known) of April and May 1992, when 63 people were killed and 2,383 injured. It was the largest civil disturbance in American history.

Twenty-five years later, people continue to wonder: How could the officers in his case have been acquitted? Why wasn’t the video evidence strong enough?

Sociologist Forrest Stuart argues that in fact, video never speaks for itself. It is always embedded in context. In the King case, attorneys for the officers were able to frame what seemed to be an obvious reality to the casual viewer in an entirely different light, one favorable to the police. Defense attorneys focused on the figure of King in the video, leaving the officers in the background. Each movement by King was interpreted for the jury by police experts as potentially dangerous. LAPD instructors interpreted the department’s policies, providing an expertise that overwhelmed much of the video evidence.

In response to the King verdict, civil liberties advocates learned lessons. In a series of videos taken of Skid Row homeless men who accused the LAPD of brutality, videographers from advocacy organizations were quick to arrive on the scene, taking contemporaneous evidence, most powerfully via short interviews with police officers themselves. The result, according to Stuart, is a fuller picture of the video evidence, offering context that proved that Skid Row residents were justified in crying foul at police tactics.

Stuart argues that everything relies on context, especially when it comes to high-stakes courtroom trials. In King’s case, the narrative of the police on the scene won over the jury, despite what everyone could see on the video.