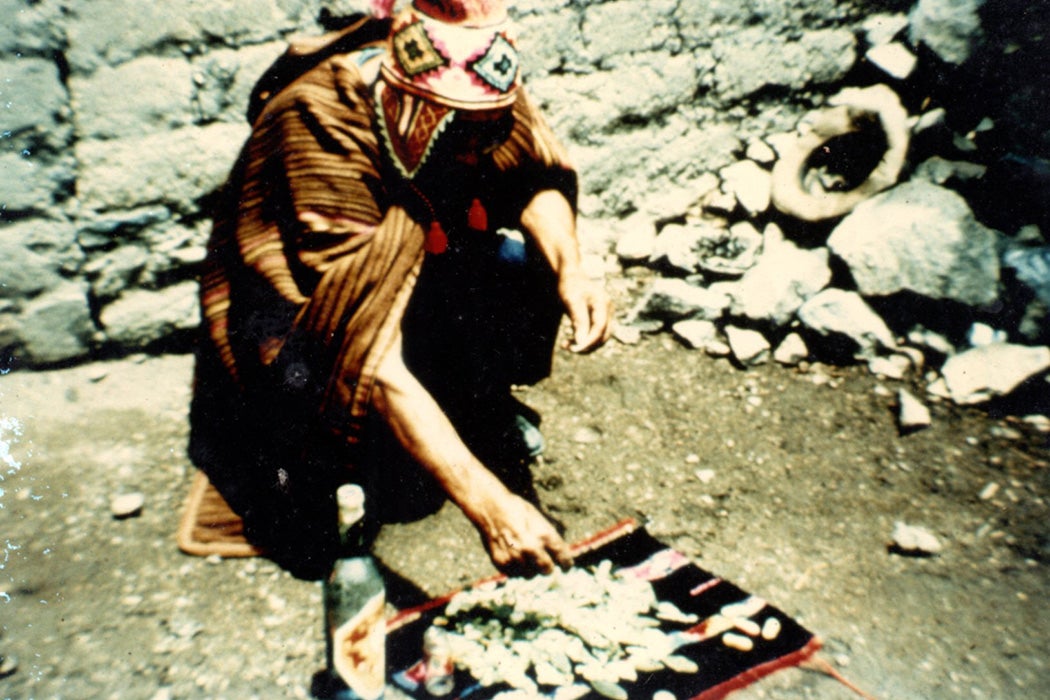 In the U.S., we mostly know coca as the raw material for cocaine, but coca has a lengthy history aside from illicit drugs. In South America, where it originated, it has been a significant part of daily life, and ritual activity, for thousands of years, as archaeologists Lidio M Valdez, Juan Taboada, and J. Ernesto Valdez explain.

Archaeologists have found evidence that people were chewing coca leaves along the Pacific coast of what’s now Peru before 5000 BCE, Valdez, Taboada, and Valdez report. It’s not clear how early people began transporting coca to other parts of what’s now Peru, but a trade route may have brought the leaves to the Andes as early as 700 BCE.

At the time they were writing in 2015, the authors had recently discovered the earliest proof of coca in Peru’s highlands—leaves wedged between two metal pins as part of a burial offering around 550 CE.

Coca is vulnerable to frost and can’t grow in the highlands, a fact which may have helped shape the region’s empires. There’s evidence that the Wari Empire, which preceded the Inca, may have colonized a lowland valley to cultivate coca there.

Archaeologists found the leaves on the lips of the Inca’s human sacrifices.

The plant was crucial to the Inca state, which probably distributed the leaves to laborers, storing them at state-controlled facilities. To keep up coca production, the Inca adapted low-lying rainforest land to grow the plants. When the Inca incorporated coastal lands into its empire, one of its first moves was to reorganize ownership of coca plantations.

When the Spaniard Pedro Cieza de León traveled across the Andes in 1552, after the Spanish conquest of the Inca state, he described the prevalence of the leaf: “Throughout Peru the Indians carry this coca in their mouths; from morning until they lie down to sleep they never take it out.”

Other Spaniards noted offerings of coca leaves at shrines. Later, archaeologists found the leaves on the lips of Inca human sacrifices.

The Spanish disapproved of coca and attempted to eradicate it, but ultimately without success. Today, the authors write, coca chewing remains “almost universal” across the highlands region, and not just as a practical aid for hard work. Families share coca leaves to mark milestones such as births, deaths, a boy’s first haircut, or a girl’s first menstruation. When a man courts a woman, his family distributes coca leaves to hers. Coca acts as a substitute currency, too.

The leaves are also part of divination and healing practices. And people make offerings of them to their ancestors and to significant natural locations.

“This custom is an integral part of Andean philosophy, which asserts that natural features such as mountains, caves, lakes and rivers are animate and must be provided with coca leaves,” the authors write.

While they caution against assuming that the use of coca leaves today is the same as it was thousands of years ago, Valdez, Taboada and Valdez write that it represents a highly significant long term human-plant relationship.

Ancient Use of Coca Leaves In the Peruvian Central Highlands
By: Lidio M Valdez, Juan Taboada and J. Ernesto Valdez
Journal of Anthropological Research, Vol. 71, No. 2 (SUMMER 2015), pp. 231-258
The University of Chicago Press