The increased participation of women in labor helped create the Canadian feminist movement. 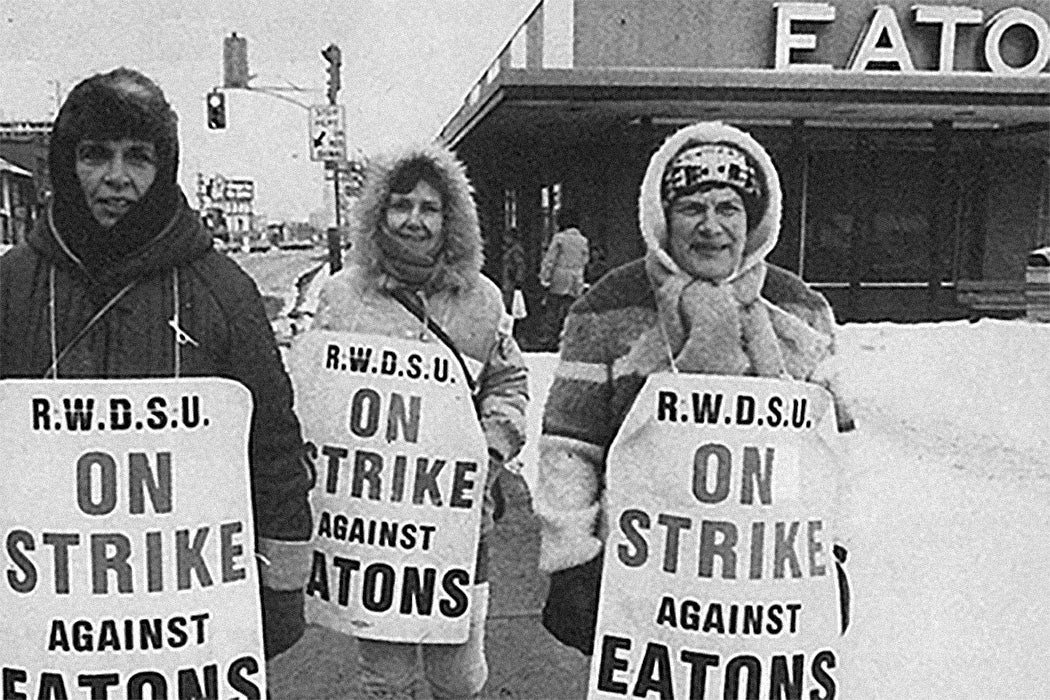 the picket line outside Eaton’s during the 1984-85 strike
via Rise Up Feminist Archive
By: Julia Métraux
2 minutes
Share Tweet Email Print

In the 1960s, the labor movement in Canada was predominantly male. So, how did union and other working-class women get unions to make fighting for women’s rights a union issue? They organized within union spaces, possible in part due to the 144 percent increase of women workers in unions from 1965 to 1975.

“As their numbers grew, union women challenged the sexist structures and organizational cultures of their unions and worked to get unions to adopt positions that would directly affect women,” Meg Luxton, a gender, sexuality and women’s Studies professor explains.

There have been three distinct women’s movements in Canada in the twentieth century, according to Luxton. A movement in Québec, a movement in the rest of Canada, and a movement by Indigenous women. The second of these was largely led by union workers and other working-class women.

Union leadership also recognized that appointing women to leadership positions was important in dismantling a “boy’s club” culture. In 1984, for example, the Canadian Labour Congress created a requirement of having a minimum of six women in vice president positions.

“They recognized that when competent women leaders are visible, more women are likely to participate and more men and women are able to accept women in leadership positions,” Luxton writes.

Through their organizing work, women were also able to convince the public that they are a crucial part of union organizing. This was seen during the Eaton’s Strike in 1985, which fought for Eaton’s workers to get a fair contract. “The striking women and the women organizers from RWDSU [Retail and Wholesale Department Store Union] were clear that the support from the women’s movement was very important in helping them stick out the long strike through the winter.”

This is not to say that working-class feminism did not have its difficulties. Getting “liberal feminists, women’s liberation activists, union feminists, and working-class women” on the same page has not always been an easy task. “The homophobia and conservatism of aspects of working-class feminism were revealed for example in 1979 during the organizing for International Women’s Day (IWD) in Toronto when Organized Working Women proposed that abortion and lesbian issues be dropped for fear of offending and alienating union women.”

A positive aspect of this movement led by unionist and other working-class women was the recognition of how class and race also impact people’s experiences in the workforce and in society. “The demands explicitly linked struggles for both women’s equality and anti-racism with working-class struggles for more equitable distributions of wealth and access to resources.”