The Princes of Saxony Collected These Kitschy Miniature Mountains

Struck with “Berggeschrey,” or “mountain clamour,” early modern nobles of Saxony dolled up the dirty and dangerous work of the mines with gold and glitter. 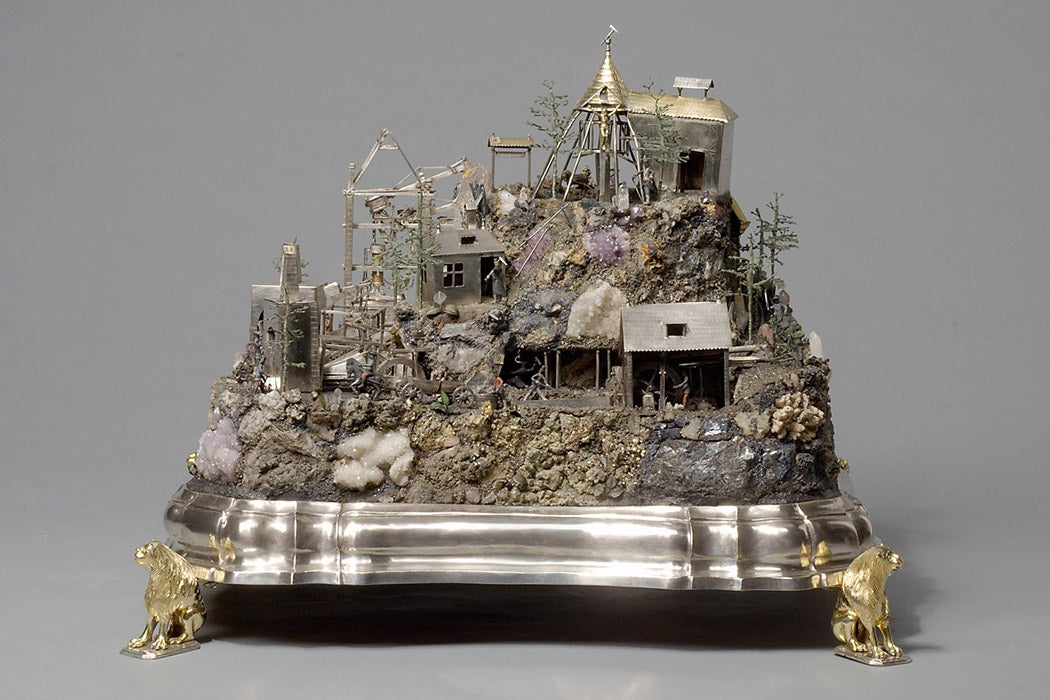 The Green Vault, a museum in Dresden, houses what must be the most beautiful set of miner’s tools ever made. Silver leaves swirl over the axe blade, and the handle is dotted with precious stones. The leather tallow-bag gleams with blue enamel and sapphires, and even the knee-protectors come with gold-embossed plaques.

Of course, no miner ever used these lavishly impractical tools. They were props: the Prince-Elector of Saxony, Johann Georg II, carried them through the streets of Dresden during the festivities of 1678, dressed to match in miner’s clothes. Before him, the god Mercury rode atop a massive float in the shape of a mountain, which was riddled with tunnels full of miners at work. Smelters paraded behind them, and minters who threw silver coins into the crowds.

Why would a prince cosplay as a miner?

Why would a prince cosplay as a miner? A prince’s treasure hoard cannot exist without somebody doing the back-breaking labor of smashing their raw materials out of rocks, but rarely are these figures placed so explicitly side-by-side, let alone conflated.

Yet the 1678 festivities were far from the only time that the nobles of Saxony dolled up the dirty and dangerous work of the mines with gold and glitter. In 1591, Prince-Elector Christian I of Saxony marched through the streets of Dresden in miner’s garb, trailed by attendants carrying pallets full of uncut diamonds. In 1719, the court held a banquet within a hollowed-out mountain. The tables were laid out with model mountains made of sugar, ornamented with miniature miners and machines.

The candy mountains were confectionary versions of one of Saxony’s most distinctive art forms: the Handsteine. These large chunks of ore were set into pedestals and made to look like busy mining sites, crawling all over with tiny figures and delicate model mining-machines. Imagine all the kitsch of a toy Christmas village, picked out in gold and silver. Shimmers of precious metal or uncut gems glint from within the substrate’s dark matrix. Shadowy hollows in the stone hint at deep subterranean tunnels, and clusters of quartz gleam from the ground like heaps of snow.

Here and there, tiny enameled figures are hard at work: swinging axes, cranking winches, carting wheelbarrows full of ore. Intricate silver instruments stand on the slopes of twisting stone; in one, the brutal efficiency of a Newcomen engine (cutting-edge technology at the time) is rendered with the snowflake delicacy of clockwork. Others are surmounted by Biblical scenes: David and Bathsheba, Christ on the Cross, the Resurrection.

The royal obsession with mining started in 1470 with the discovery of silver in the Ore Mountains. The silver boom was heightened by simultaneous advances in technology which made deeper mining worthwhile. As the Ore Mountains were hollowed out, mountain towns sprang up at every new discovery of a rich vein. A word was invented to describe the breathless excitement of the era: “Berggeschrey,” or “mountain clamour.”

Miners came to know how different ores smelled and felt and sounded when cracked between the teeth.

Miners developed an intuitive sense for the way ore ran through the earth. They took handfuls of earth and mixed them with rainwater and tasted them; they came to know how different ores smelled and felt and sounded when cracked between the teeth. At the time, it was believed that metals grew beneath the earth like plants, spreading out tendrils and gradually ripening into more and more perfected forms. In his 1540 text on metallurgy, De La Pirotechnia, Vannoccio Biringuccio described ore growing in the earth:

From its principal trunk extend various branches, some thick, some slender, exactly like real trees in mature forests. They think that these grow and enlarge continually and draw themselves toward the sky, ever converting into their own nature the most disposed adjacent materials so that finally the tips arrive at the summit of the mountain and emerge with clear sign, sending forth, in place of leaves and blossoms, blue or green fumosities…

When miners hit bismuth or antimony, they thought they had come too soon, before the metal could mature into something more precious.

Life in the mines was lively, dangerous, and haunted. The workers complained of subterranean demons: kobolds with the appearance of tiny old men, who ran through the tunnels, giggling and throwing pebbles around. As Georgius Agricola recounts the antics of these demons in his Dialogue on Metallurgy:

Some of them do the miners no harm, they only stroll through the galleries, and they seem to work. Sometimes they hollow a gallery, sometimes they fill carriers with extracted material, sometimes they move the hoisting machine, and sometimes they tease the workers. They preferably do this in mines where rich ores are to be extracted or where there is at least hope to find much silver. Others in contrast are actually most harmful, such as the mining spirit who viciously attacked miners in the pit called Rosenkranz [Rosary] in Annaberg several years ago, where twelve of them died. Many people know this story and they have abandoned the pit although it is rich.

Then there was the Wild Man, a creature shaped like a human, but covered in matted hair, who supposedly guarded rich veins in the earth. Initially a threatening figure, the Wild Man became a kind of mascot of the mines, lending his name to towns and pits, and his picture to the silver coins minted from the ore scraped out of the mines.

From these wild, eerie, dangerous places came the riches that gave Saxony its power. The nobles had the spoils, but evidently, they wanted something else too. The courtly culture of Saxony returned persistently to its obsession with the rough and wild side of the mines: the prince paraded around town dressed up like the world’s fanciest miner; chunks of unrefined ore became valuable collectibles; the Sasquatch-like monster of the wilderness got his face stamped on currency.

In a Renaissance Studies article, “In the Garden of Eden? Mineral lore and preaching in the Erzgebirge,” Henrike Haug sheds light on this strange ambivalence:

Avarice and malevolence as vices are closely linked to the misuse of gold – which, at the same time, is positively valued as a tribute to God and a means of supporting his church, as well as admired as a beautiful material recalling in its lustrous surface the immaterial presence of the light of God. The problem of gold and other precious metals lies in this conflict between the praise of them in their natural state as a divine benefaction and example – and the condemnation of them after unearthing, in their utilization in daily life.

Chunks of ore are the earth’s spontaneous bounty, but silver coins are filthy lucre. In this light, all the absurdities of the princes of Saxony–the golden axes and sugar-spun mountains–can be seen as an attempt to recover what’s lost when ore is refined into precious metal.