Aphrodisiac and contraceptive, enflaming and cooling, the pomegranate was a balancing act, mediating between opposing states. 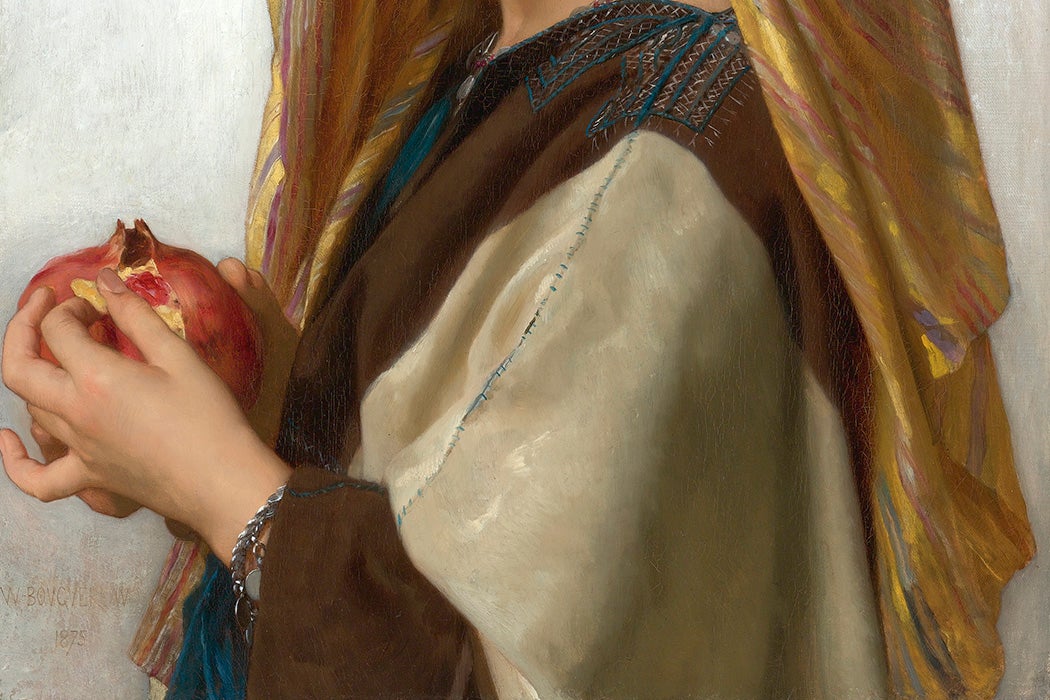 Is there any fruit as richly endowed with symbolic and therapeutic values as the pomegranate? Buddhism, Christianity, Hinduism, Islam, and Zoroastrianism all turned the pomegranate into a symbol of mediation between life and death. And beyond: One of the the most important of Eurasian medicinal plants, the pomegranate also represented immortality, eternity, and resurrection to people as far afield, geographically and temporally, as the Babylonians, Chinese, and Christianized Europeans. Rabbis, popes, kings, and poets all made the fruit symbolic of the one and the many, of multiplication and unity, the part and the whole.

“The pomegranate symbolized cyclical, dualistic relationships between life and death, fertility and barrenness, childhood and motherhood,” writes medical historian A. R. Ruis, who continues that the fruit “often mediated these dualities, serving to govern the transition from one part of the dyad to the other.” Aphrodisiac and contraceptive, enflaming and cooling, pomegranate was a balancing act, mediating between opposing states.

A nightingale sings in a pomegranate tree outside Juliet’s window as she awaits Romeo.

The fruit’s oldest symbolic association are with fertility and reproduction. Peoples of the Middle Eastern and Mediterranean region associated it with goddesses like Inanna, Kubaba (Cybele), Tanit, Astarte, Rhea, Hera, Athena, and Aphrodite. In the ancient Greek myth of Persephone, she eats some of the seeds given to her by the lord of the Underworld, binding her to return for half of every year. Two thousand years later, a nightingale sings in a pomegranate tree outside Juliet’s window as she awaits Romeo.

The pomegranate tree itself is a candidate for the Biblical “Tree of Life.” Yet even before monotheisms triumphed over pantheons, the pomegranate began to take on dualistic meanings. It represented life and fertility, yes—Bedouin, Chinese, Greeks, Indians, Persians, and Romans, among others, made pomegranate a “common symbol of fertility in wedding rites” —but also barrenness and death.

The rind was used as a contraceptive, topically applied in the case of men or in suppositories in the case of women. The fruit could cause both the “loss of virginity” and the “restoration” of it. Ruis notes a twelfth-century Latin compendium of women’s medicine and cosmetics, which gives the recipe for a powder including pomegranate rind, presumably for the red coloring, that could be used to create the illusion of a hymen.

In premodern medicine, pomegranate root, bark, blossom, rind, seed, and aril (the juicy scarlet seed coverings) were all used. The range of uses was vast, seemingly contradictory: “both as an astringent and a laxative, an emmenagogue and an anti-menorrhagic (though that may not be an actual word), an expectorant and an antiemetic, a pyrogen and a febrifuge, a restorative and a soporific.”

The oldest and perhaps most common use of pomegranate was the inclusion of the root in vermifuges. There’s a 3500-year-old Egyptian recipe for expelling hefat worms, which are presumed to be a type of tapeworm, with pomegranate root.

Catching up with the ancients, modern science has found chemicals in pomegranate that have “antitherogenic, antibiotic, anticarcinogenic, antihypertenisve, anti-inflammatory, antioxidant, astringent, estrogenic, neuroprotective, spermatogenic, and vermifugic properties.” Whether this makes pomegranate a “superfood” or not, Ruis writes,“the medicinal efficacy of a substance is based not on essential properties but on cultural and social understandings of its use in therapy or prevention.”

Rius concludes, “in bridging historic and modern anxieties about health and diet, pomegranate is even now a symbol of duality.” Also, the seeds are fun in a salad.