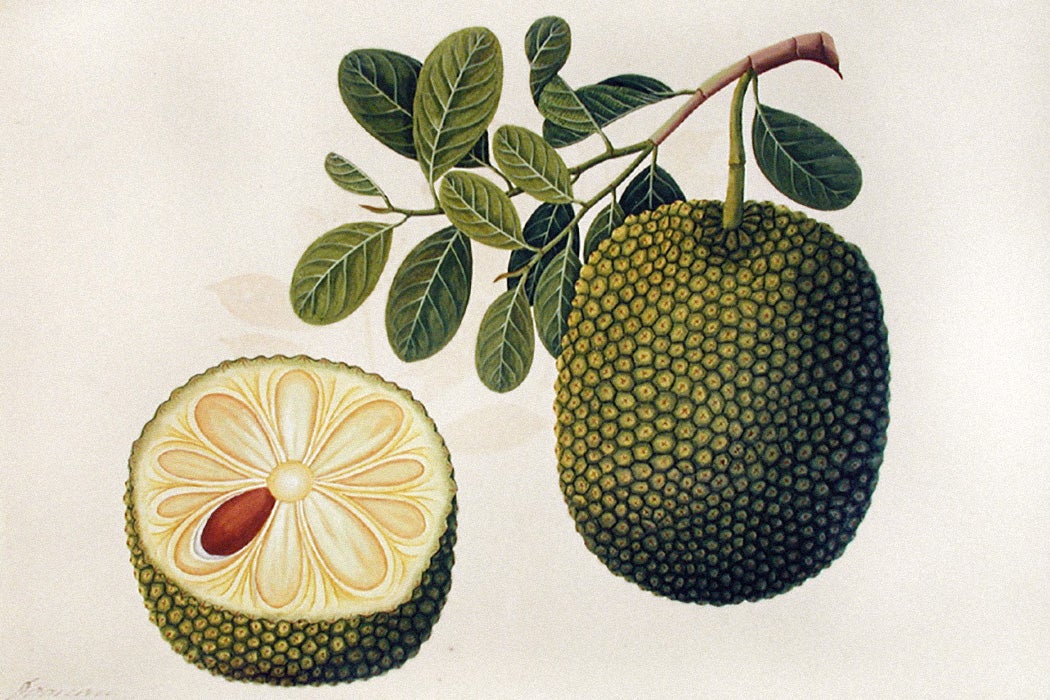 In the past few years, scores of articles have hailed jackfruit as a new meat alternative. “Move aside, avocado,” one orders, “because jackfruit is the new global rage.” Another, in National Geographic, asks simply, “is jackfruit the next big meat substitute?”

That jackfruit can make a convincing meat alternative is undoubtedly true. Popular recipe sites, such as Bon Appetit and Epicurious, have published multi-star recipes highlighting the fleshy texture of the plant. But is the jackfruit new at all? By examining the long trajectory of jackfruit consumption, we see that the answer to this question is a resounding no. Jackfruit is not new in South Asia and its surrounding regions, where it has been a culturally significant foodstuff for centuries. Nor is jackfruit new in the West. Rather, it has a long and disquieting history: British imperialists wielded jackfruit as a tool to provide cheap nutrition to enslaved and coerced laborers throughout their empire.

One fourteenth-century traveler compared jackfruit’s size to “that of a lamb and a three-year-old child.”

First, though, what is this plant that is being heralded as the next big meat substitute? Artocarpus heterophyllus, or jackfruit, has extraordinarily large fruit. It is, according to the Oxford Companion to Food, “enormous, occasionally reaching 40 kg (90 lb) in weight, which makes it the largest of tree-borne fruits.” Indeed, one fourteenth-century traveler compared jackfruit’s size to “that of a lamb and a three-year-old child.” The inside of the jackfruit, when unripe, is starchy. When ripe, according to food writer Tejal Rao, it has “some sweetness and a powerful smell,” with an “intense, tropical, pineapple-like flavor.”

According to a scientific article of 1980, jackfruit is a “native of the region lying at the foot of the Western Ghats of the Indian Peninsula, whence it is supposed to have spread into other tropical countries.” Indeed, nineteenth-century Swiss botanist Augustin Pyramus de Candolle wrote of the fruit, “the species has long been cultivated in southern Asia, from the Punjab to China, from the Himalayas to the Moluccas.”

The jackfruit, heralded by some as the “King of India,” has many uses in South Asia. According to Curtis’ Botanical Magazine, a leading nineteenth-century botanical publication held in Dumbarton Oaks’ Rare Books Library, “the unripe fruit is also used pickled, or cut into slices and boiled, or fried in Palm oil.” Further, scientists today have found that “several parts of the jack tree including fruits, leaves, and barks have been extensively used in traditional medicine due to its anticarcinogenic, antimicrobial, antifungal, anti-inflammatory, wound healing, and hypoglycemic effects.” And long before it became a global vegan phenomenon, jackfruit was also used as a stand-in for meat in South Asia: the Bengali word for the fruit is often translated as “tree mutton,” according to food journalist Emily Stephenson.

When Europeans reached South Asia, many began to eat the jackfruit and extol its virtues. In a translation of Portuguese physician Garcia da Orta’s sixteenth-century work on the drugs of India, the author says to an imaginary colleague, “You have been eating the chestnuts that are inside it, and you said that roasted they tasted like chestnuts; and now you may eat the rinds that cover them, which are yellow and have a pleasant taste.”

British imperialists became obsessed with this large fruit as a source of nutrition. The preeminent environmental historian Richard Grove details how East India Company botanist William Roxburgh, in the late eighteenth century, introduced the jackfruit to botanical gardens in South India and advocated for its planting in Ceylon, given the region’s recurrent famines—which, as scholars have shown, were caused or exacerbated by poor British food-distribution policies.

British colonizers like Roxburgh advocated for the spreading of breadfruit worldwide to prevent famine and to provide cheap provisions for enslaved populations. While many people today may know about the famous voyages to transplant breadfruit to the Caribbean, far fewer are aware of the attempts to transplant jackfruit. According to historian Anya Zilberstein, English botanist Joseph Banks attempted to introduce jackfruit, alongside the breadfruit, “from the South Seas to the West Indies…to reduce dependence on American wheat and rice imports for feeding their slaves.” In a letter Banks wrote in 1787, he referred to jackfruit as “a most valuable fruit, affording abundant nourishment in a variety of preparations contrived to suit its different degrees of ripeness.”

By the eighteenth century, the jackfruit was assimilated into Caribbean foodways. A nineteenth-century botanical magazine details how the jackfruit tree “seems naturalized [there], particularly in the island of St. Vincent.” A specimen from St. Vincent was also brought to the Edinburgh Botanic Gardens, where it allegedly flowered in 1827.

While the jackfruit is still popular in Caribbean foodways—alongside those of South Asia—it did not initially take off on the British Isles, despite its apparent existence in botanic gardens there. Perhaps this is due to the difficulty of growing jackfruit in the region’s tepid climate, or to how colonial ideas about difference translated into ideas about scent, as many Europeans described the fruit as having an “offensive” and “highly disgusting smell.”

For whatever reason jackfruit was seemingly forgotten by westerners, the notion that it is new is incorrect. It is not new in South Asia, where it has long been significant in the region’s foodways. Nor is it new in the West, as the fruit played an outsize role in British colonial provisioning. The Dumbarton Oaks Plant Humanities Lab investigates the changing meaning of plants across time and space to explain why historically significant plants are deemed “new” in current cultural discourses.