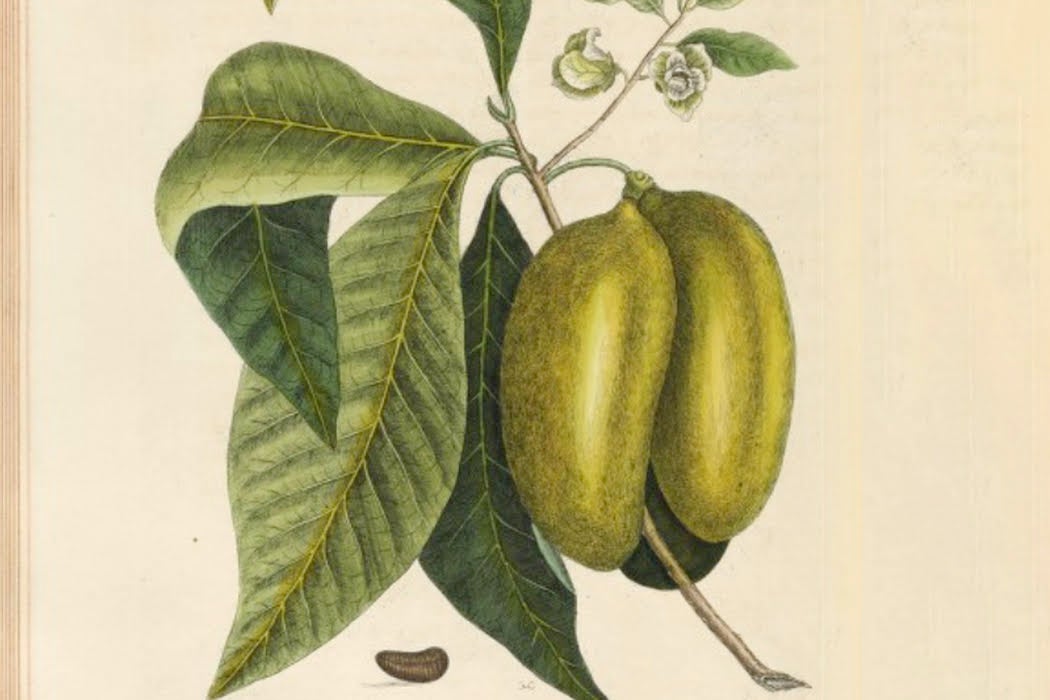 In the past few years, the pawpaw—the largest edible fruit indigenous to North America—has been popularly hailed in the media as a panacea for a variety of climate-related woes. The New York Times published a piece called “The Promise of Pawpaw” in 2020, noting that “issues like climate change, economic inequity and access to food have brought more attention to this creamy fruit and its resilient tree.” Similarly, in 2020 Civil Eats held that the pawpaw could soon become a “valuable crop for northern farmers” due to a warming climate.

In response to such laudatory comments, many have asked why the pawpaw fell out of favor in American society in the first place—“What is the pawpaw, and how did we forget it?” queried Gastropod, a popular food history podcast.

But perhaps the question we should be asking is not how pawpaw was forgotten, but rather whether pawpaw was forgotten at all. As scholar of Indigenous foodways and member of the Choctaw Nation of Oklahoma Dr. Devon Mihesuah argues, “I’m not sure that it’s been forgotten. I think it’s been ignored, disliked, and unavailable.”

Scientists hypothesize that the pawpaw may have been one of many large fruits distributed by herbivores in Central America. The extinction of these herbivores by the end of the Pleistocene era meant that the distribution of such plants was constricted. However, as José Hormaza argues, pawpaw was able to survive because it could easily produce “numerous root suckers that form pawpaw patches in the wild.” Some archaeologists believe that the movement of Iroquois populations contributed to the dispersal of pawpaw north. What is now known scientifically as Asimina triloba is considered indigenous to twenty-six states in the eastern United States, from New York and Michigan in the north to northern Florida in the south, and to Texas, Nebraska, and Kansas in the west. Pawpaw is also found in Ontario, Canada.

Archaeological data demonstrates the significance of pawpaw to early Indigenous diets. As food writer and gardener Andrew Moore writes, “Pawpaw seeds and other remnants have been found at archaeological sites of the earliest Native Americans, and in large, concentrated amounts, which suggests seasonal feasts of the fruit.” According to Moore, “whether at Meadowcroft or the rugged hills of Arkansas, the earliest Americans put pawpaws to great use.”

Pawpaw’s importance to Indigenous peoples in America is reflected not solely archaeologically, but in folklore and linguistics. As Moore notes, “the town of Natchitoches [Louisiana] translates to ‘the pawpaw eaters,’ and is derived from the place-name given by the Caddo, who called pawpaw nashitosh.” Joel Barnes, language and archives director for the Shawnee tribe (and tribal member) told West Virginia Public Radio, “The word for pawpaw is ha’siminikiisfwa. That means pawpaw month. It’s the month of September…That literally means pawpaw moon.”

In addition to Indigenous peoples who ate the fruit, pawpaw also at times supplemented the scant provision of enslaved Africans forcibly transported to America through the Middle Passage. Culinary historian and historical interpreter Michael W. Twitty writes in the foreword to Moore’s book, “as I explored the landscapes left by Black communities, I saw these treasure trees growing outside of the dwellings of enslaved people and clustering close to their settlements.” Pawpaw, argues Twitty, gave enslaved peoples “diversity in a diet built on nutritional monotony, and enabled them to nourish themselves on trails North to freedom.” In addition, according to Moore, pawpaws were “part of the folk medicine practiced by slaves,” and “in some communities, seeds from the fruit were worn around necks and believed to prevent various diseases.”

When European colonizers first reached America, many, at first, spoke highly of the pawpaw. A Portuguese explorer, part of Hernando de Soto’s voyage, wrote, “The fruit is like unto Peares Riall [pears royal]; it has a very good smell and an excellent taste.” Another European boasted of the fruit in a memoir, “I ate, one day, sixty of them, big and little.”

While some Europeans may have prized pawpaw, as ideas about race and the body were codified throughout the eighteenth century, many began to have a different, more dismissive view of the fruit. Mark Catesby, an English naturalist at this time, describes it as having a “rank, if not fetid smell” in a volume of his natural history held by Dumbarton Oaks. He continues, “nor is the fruit relished but by very few, except Negroes.” Here, food—or rather, the rejection of certain foods deemed “different”—becomes central “not merely in the display or performance of a fundamentally disembodied colonial identity, but rather the construction and maintenance of the colonial body,” to draw on the language of food historian Rebecca Earle.

But even as the pawpaw acted as a marker of difference, it continued to be eaten by some settlers. Hormaza cited William Clark of the Lewis & Clark expedition as writing, “Our party entirely out of provisions. Subsisting on poppaws. We divide the buiskit [sic] (biscuits) which amount to nearly one buisket [sic] per man, this in addition to the poppaws is to last us down to the Settlement’s which is 150 miles.” Pawpaws were also important in rural diets, so much so that the fruit is variously referred to as the Kentucky, Indiana, Hoosier, or poor man’s banana.

Agronomists, too, praised the virtues of pawpaw in the early nineteenth century: Moore reports that in 1916, the American Genetics Association held a contest searching for the best pawpaws in the country. He writes, “the purpose of the contest was to collect games of superior wild pawpaws, from which a serious, scientific breeding experiment could then be conducted…Suddenly, the best of America’s pawpaw folk knowledge, and the best pawpaws themselves, were in the hands of scientists.”

And yet, despite scientific interest, the pawpaw never reached ubiquity on supermarket shelves. Racialized colonial understandings of the pawpaw may have contributed to its marginalization, alongside new global supply lines. As the postwar era saw an increase in the long-distance shipping of fruit and the progressive integration of global food systems, the pawpaw could not compete with fruits like the banana that are more easily shipped and stored. Indeed, as scientists concluded in 2003, “there are a number of practical problems with pawpaw harvest and postharvest storage,” especially the fact that pawpaw fruits “soften rapidly” after being harvested.

Pawpaws thus disappeared from many American diets. Moore chronicles meeting Cherokee tribal elder Jerry Wolfe in North Carolina—Wolfe had only seen a pawpaw tree once: “It’s been quite a number of years…but I haven’t seen it since. I’ve looked for it, whenever I’m passing or fishing up in there, but I think it died.”

This is all to say that the pawpaw was not merely “forgotten” in American society. Rather, it fell out of favor due to colonial understandings of food as a locus of difference, as well as increasing globalization and economic needs. But some communities are currently trying to revitalize knowledge surrounding the fruit. The New York Times reported that DeLesslin George-Warren, a researcher and organizer from the Catawba Indian Nation, received grants to “start his nation’s first food sovereignty program, which included planting 100 young pawpaw trees.” As George-Warren argued, “A big part of this is recovering the knowledge that was taken from us through colonization…We can mourn what was lost, but we still need to work on this, and the earth is our first teacher.” And an annual festival dedicated to “highlight[ing] the rich history and future possibilities of the pawpaw” has been held in Ohio for the past twenty-three years.

So we see that the waning use and current resurgence of the pawpaw has complex historical roots. The Plant Humanities Initiative at Dumbarton Oaks investigates the forces behind the fluctuating fortunes of plant foods—and the way communities are endeavoring to revive valuable traditions of cultivation and consumption. 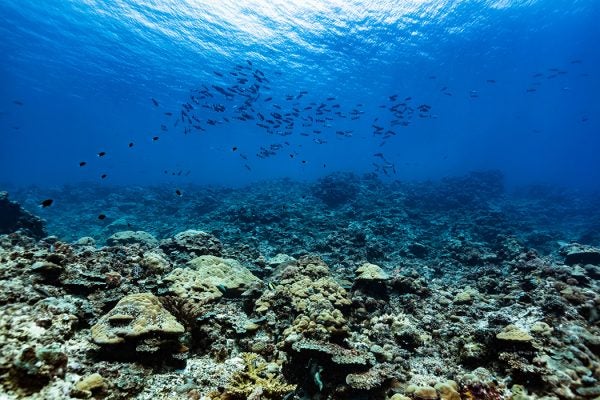 Scientists Find Clues to the Mysteries of an Ocean Reef

Beyond the tropical waters of the island nation of Palau lies the Ngaraard Pinnacle, a much rarer kind of reef than its colorful coral cousin.