The Movable Tent Cities of the Ottoman Empire

The most lavish among them were festooned with colorful appliqué and brightened with gilded leather. 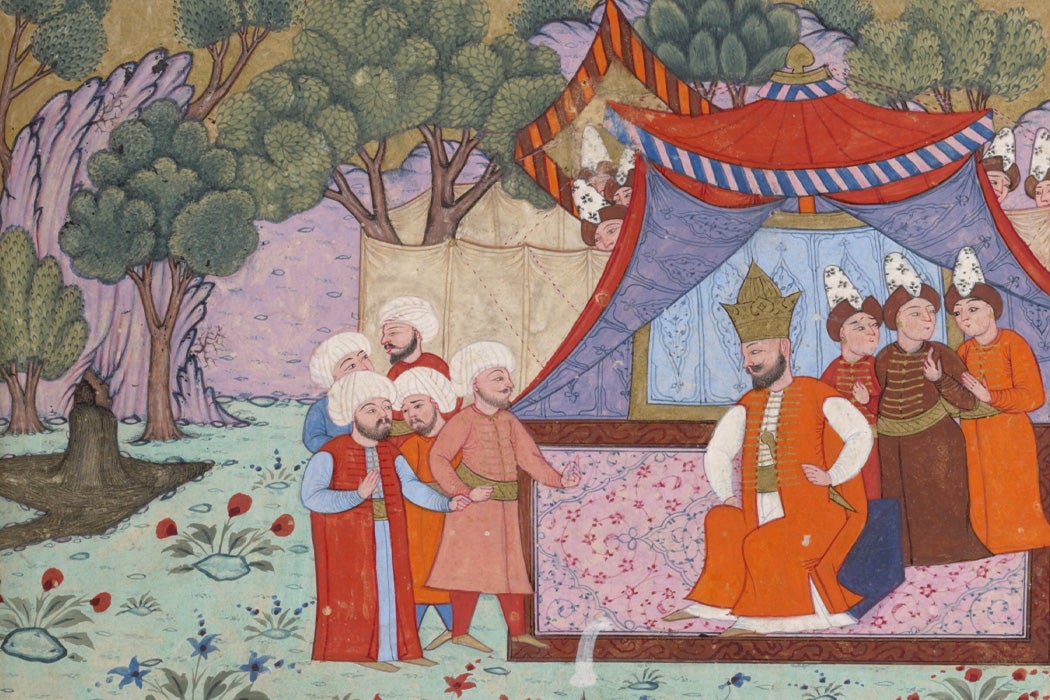 Rustam captures the King of Mâzandarân and takes him before the tent of Kay Kâ'ûs, 1616-1620
via NYPL
By: Amelia Soth
4 minutes
Share Tweet Email Print

If the potter’s medium is clay, then the flatterer’s is cliché. We all know that the king struts like a lion, strikes like an eagle, shines like the sun, and so forth. But consider this line, from the preface to the Album of Sultan Ahmed Khan, ruler of the Ottoman Empire: “May the respected tents of my sovereign as mighty as Jamshed, refuge of the world, be extended and stretched with the eternal pegs and ropes of his generous, felicitous being.”

A tent just doesn’t have the gravitas we expect from the grade-A kind of professional flattery on offer in Sultan Ahmed’s album. And how do you get away with comparing your magnificent ruler to an eternal tent peg? To the Ottomans, however, tents were not just a convenience for travel, but a prized form of architecture in their own right. They were “mobile palaces,” so elaborate that their management required the work of a specialized official—the head tent-setter, or otakçibaşi.

It sounds like something out of Italo Calvino’s Invisible Cities: a solid city of brick and stone—and its mutable cloth counterpart.

The Ottoman empire arose in the thirteenth century from Turkish nomads who used tents for military encampments and as moveable homes. As the empire became sedentary, the Ottomans were unwilling to leave their tents behind. “In imagining Edirne in the first half of the fifteenth century,” writes Amy Singer, a prominent scholar of Ottoman history, “one must add the possibility of semi-permanent encampments on the city’s outskirts as an integral part of its built and urban landscape, an extension in felt, leather, and weaving to the stone, mortar, and wood of the city’s mosques, markets, and dwellings.”

It sounds like something out of Italo Calvino’s Invisible Cities: a solid city of brick and stone—and its mutable cloth counterpart. The Ottoman imperial tent complex has often been described as a “mobile palace.” Yet, according to art historians, the architecture of the Topkapi Palace suggests that it was designed as a kind of stationary tent complex. One French traveler, Corneille Le Bruyn, put his finger on it (quite unintentionally) when he wrote: “As for the Buildings which compose the Body of the Seraglio, there is no regularity of Architecture nor any Symmetry observ’d in it; but ‘tis a heap of uneven Houses separated from one another in the Nature of Tents, built for the most part on Large Arches.”

More charitably, we could say that the Topkapi is set up as a series of courtyards dotted with free-standing pavilions. A tent-inspired palace may have seemed undignified to a French observer, but it made perfect sense to the Ottomans. It was a nod to their history and to their military might.

The tents varied widely: from multistory structures to tiny, one-person-sized parasols. There were bathroom tents, kitchen tents, and even the ominous “execution tent.” The most lavish among them were festooned with colorful appliqué and brightened with gilded leather. When ambassadors from Austria visited Suleyman the Magnificent in his royal tent, they were so astonished by the riches on display that they were struck dumb, transformed into “speechless corpses.”

Festivals and celebrations provided the impetus for a number of masterpieces of tent architecture. In 1720, Sultan Ahmed III threw a fifteen-day festival celebrating the circumcision of his four sons. It was a truly fabulous event. Ten thousand jars of sherbet were ordered to feed the guests. And in the book the sultan commissioned to commemorate the event, there was a one-page spread devoted to the tents: the massive three-poled banquet tent; the gunners’ tents, with their rows of cannons; and, of course, the imperial tent city, its poles tipped with gold, enclosed with a cloth fence. The tent corps even created a tent replica of the Tower of Justice, a fixture of the Topkapi Palace.

The tent is a recurring presence in Ottoman miniature paintings. Often, it serves as an integral aspect of the monarch’s appearance, framing his dignified figure and setting it apart from the surrounding landscape, like the scrollwork around an illuminated letter. If we return, then, to Sultan Ahmed, he of the eternal tent pegs, the flattery begins to make sense. The tent was a symbol of Ottoman heritage, a representation of military power, and a component of the sultan’s royal identity.

PRESENTING VAṢṢĀL KALENDER'S WORKS: THE PREFACES OF THREE OTTOMAN ALBUMS
By: SERPİL BAĞCI
Muqarnas, Vol. 30 (2013), pp. 255-313
Brill
THE DEPICTION OF CEREMONIES IN OTTOMAN MINIATURES: HISTORICAL RECORD OR A MATTER OF PROTOCOL?
By: ZEYNEP TARIM ERTUĞ
Muqarnas, Vol. 27 (2010), pp. 251-275
Brill
Enter, Riding on an Elephant: How to Approach Early Ottoman Edirne
By: Amy Singer
Journal of the Ottoman and Turkish Studies Association, Vol. 3, No. 1 (May 2016), pp. 89-109
Indiana University Press
Istanbul: The Palimpsest City in Search of Its Architext
By: Nebahat Avcioğlu
RES: Anthropology and Aesthetics, No. 53/54 (Spring - Autumn, 2008), pp. 190-210
The University of Chicago Press on behalf of the Peabody Museum of Archaeology and Ethnology
Süleyman the Magnificent and the Representation of Power in the Context of Ottoman-Hapsburg-Papal Rivalry
By: Gülru Necipoğlu
The Art Bulletin, Vol. 71, No. 3 (Sep., 1989), pp. 401-427
CAA
The Story of an Eighteenth-Century Ottoman Festival
By: Esin Atil
Muqarnas, Vol. 10, Essays in Honor of Oleg Grabar (1993), pp. 181-200
Brill