No one could have predicted Franz Xaver Messerschmidt’s turn to the bizarre. 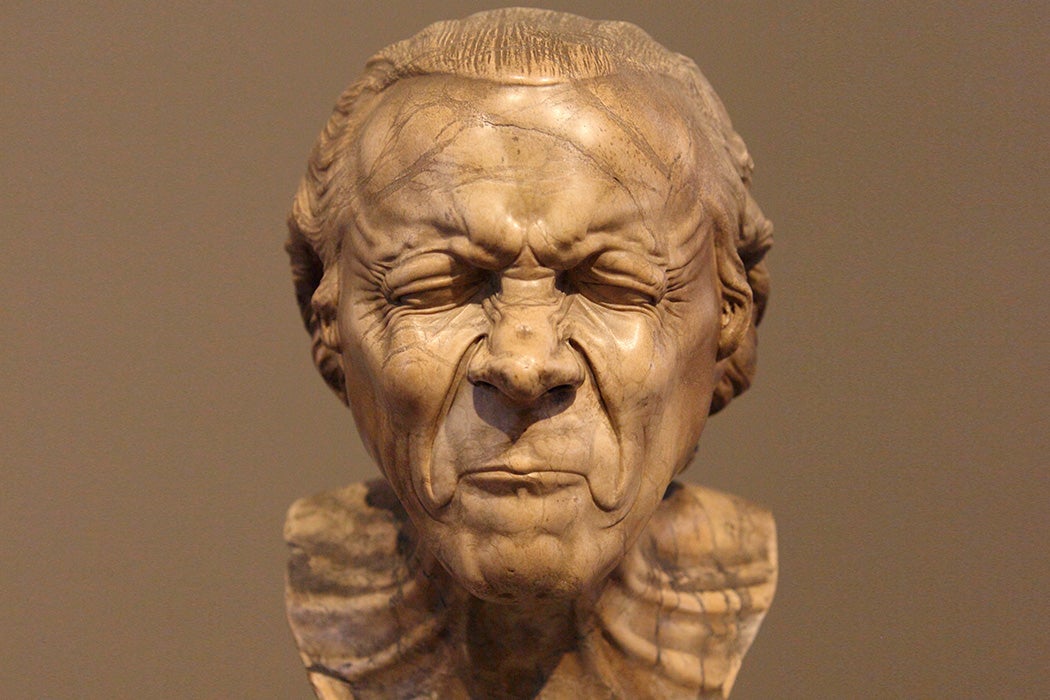 I still remember the first time I saw one of Franz Xaver Messerschmidt’s Character Heads. I was about twelve, and bored in a gallery full of eighteenth-century portrait busts—you know the deal: row after row of bland-faced, fluffy-wigged, idealized portraits of Dukes and Duchesses. Then I locked eyes with it: contorted, grimacing, wild-eyed, and staring at me, actually leaning forward on its plinth.

All of Messerschmidt’s Character Heads radiate the same pure weirdness, and yet they each have a distinctive personality. You can see the whole family laid out here, in a lithograph by Matthias Rudolph Toma. Some look like they’re bursting to tell you the punchline of a dirty joke. Some look like they just caught a whiff of you, and you smell terrible. Some appear to be racked with guilt; others just seem to have been caught mid-sneeze. Frozen, somehow, in the illegible flux between extreme emotions, they have the immediacy of photographs, despite being sculpted long before the medium’s invention.

In the 1770s, Messerschmidt suffered what his contemporaries described as “a confusion in his head.”

No one could have predicted Messerschmidt’s turn to the bizarre. He spent the first few decades of his career sculpting conventionally impressive portraits for the Viennese elite. By his mid-thirties, he had been hired by the Vienna Academy of Fine Arts and was confidently awaiting full professorship.

But in the 1770s, he suffered what his contemporaries described as “a confusion in his head” and lost out on a prestigious teaching position to his rival. He resigned his post in disgust and moved to Bratislava, where he began work on the series of “Character Heads” that have perplexed lay viewers and art historians ever since. Certainly, they were not always recognized as worthy works of art. After Messerschmidt’s death, the sculptures were exhibited for a time at the Prater, an amusement park in Vienna, as a kind of freak show. Visitors could buy garishly painted replicas in plaster or wax, and some of these copies were even used as target practice.

Most of what we know about Messerschmidt’s life after his fall from grace comes to us from the writer Friedrich Nicolai. In 1781, Nicolai made a visit to Messerschmidt’s studio, which was furnished, he wrote, with nothing but “a bed, a flute, a tobacco-pipe, and an Italian book about human proportions.” Messerschmidt’s only companions were his sixty busts, grimacing and snickering at him from around the room. 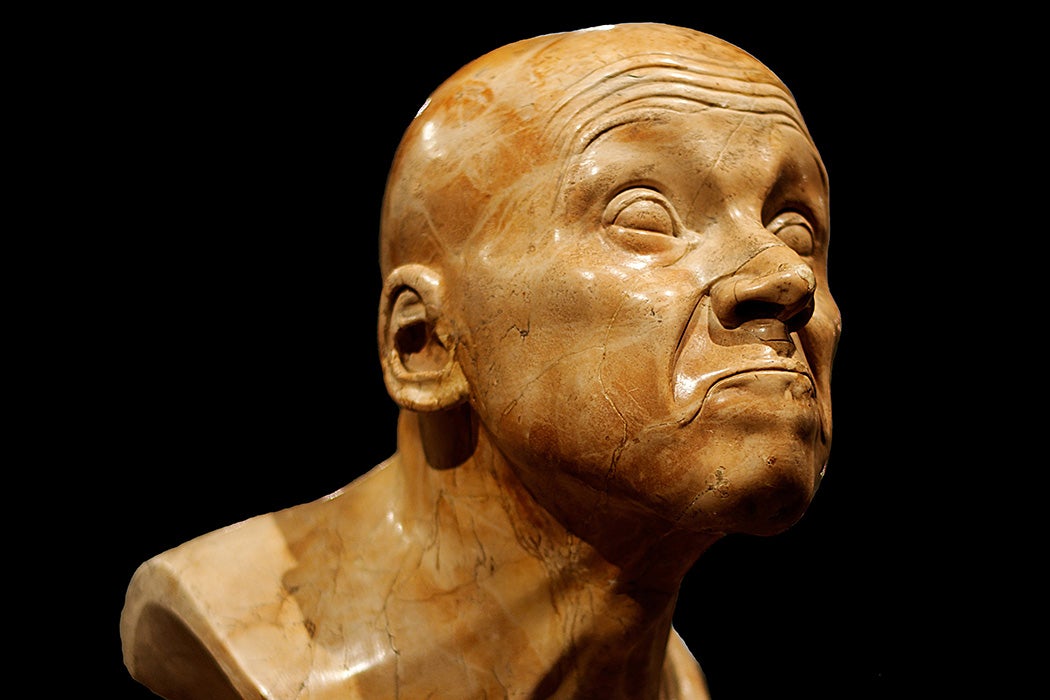 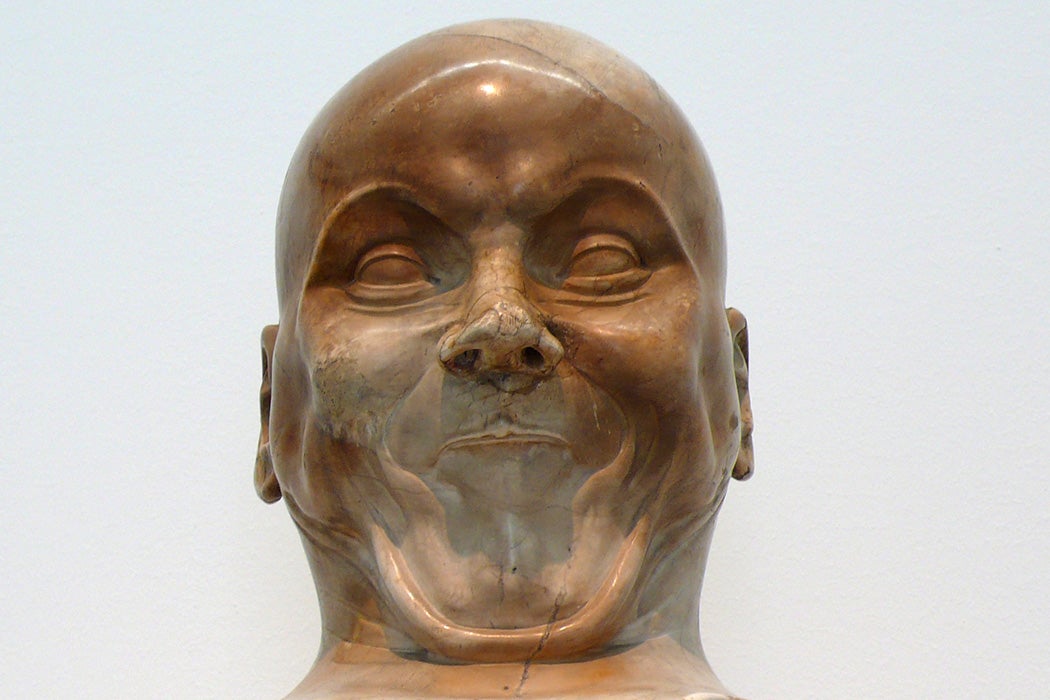 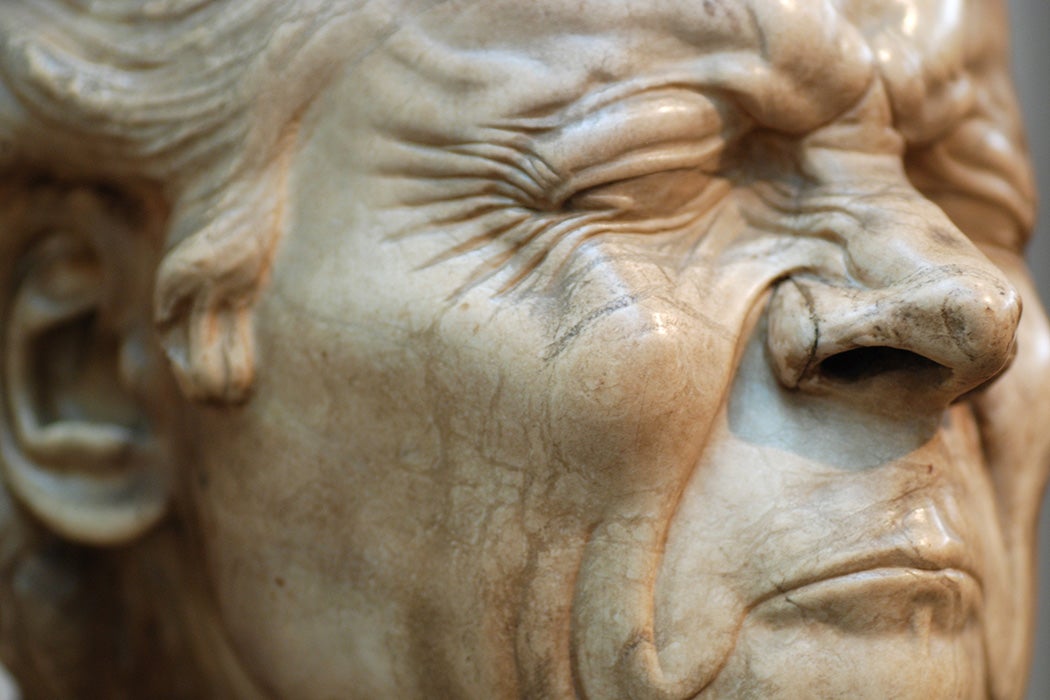 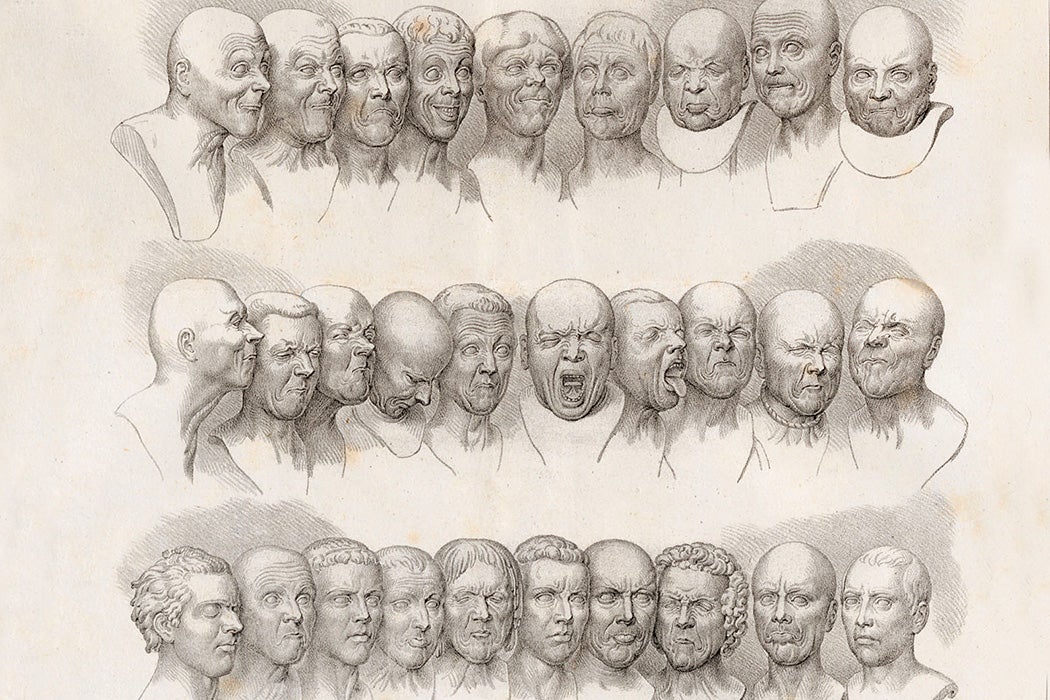 Messerschmidt, Nicolai claims, believed himself to be tormented by demons; the wicked spirits were angry that his work as an artist had uncovered divine secrets of human proportion. “He also couldn’t comprehend for a long time why he who lived such an ascetic life of celibacy would have to endure such torture from the spirits, who should have been, according to (romantic) theory, most sympathetic to him,” Nicolai wrote. A collector who visited Messerschmidt reported that his face was ruined from pulling faces all day long, modelling for his own busts. (Did anyone ever tell you, as a kid, that your face would “get stuck like that?” Messerschmidt’s the guy to whom it actually happened.)

But Messerschmidt’s project, of cataloging “the sixty-four different varieties of grimace” (as Nicolai put it), may not have been as unorthodox as it seems. He lived in a time when the structure of the face was believed to be a direct reflection of the nature of the soul. As the satirist Georg Christoph Lichtenberg wrote:

We can see nothing of the mind if it is not present in the facial expressions. The faces of a great assembly could be called the history of the human mind written in a kind of Chinese picture-writing. The mind arranges the face around itself as a magnet does iron-filings, and the variation in the position of these parts is determined by the variations in that which has created them.

Most every artist of Messerschmidt’s day would have been familiar with Charles Lebrun’s Conference sur l’expression, which serves as a kind of encyclopedia of human expressions. In fact, many a painting from the time is dotted with faces lifted directly from its illustrations. Messerschmidt’s bizarre faces may have been part of a similar project: a three-dimensional guide to the passions, cast in bronze rather than drawn on paper.

Many years after my first encounter with a Messerschmidt head, I stumbled upon another image that, despite its very different context, somehow brought back my memory of that wrinkled, staring portrait bust. It was this photograph of a neurological experiment by Guillaume-Benjamin Duchenne: an old toothless man, seemingly shrieking in fear. In fact, his terror is not real; it is the result of the electric shock running through his forehead from the wires on either side of his brow.

Each muscle, Duchenne wrote, “betrays a particular movement of the soul, each of them, in short, is the unique representative of an emotion.” His experiments sought to expose this relationship, and the disturbing photos he took—from “ferocious cruelty” to “sorrowful prayer” to “painful recollection”—bear an uncanny resemblance to Messerschmidt’s Character Heads. Messerschmidt’s sculptures and Duchenne’s experiments reside somewhere near the place where the internal force of emotion runs up against mute physical matter. The passion of the soul and the impulse of the body are both present in the same frozen moment.