The Lumpy Pearls That Enchanted the Medicis

There’s a specific term for these irregular pearls: “baroque,” from the Portuguese barroco. 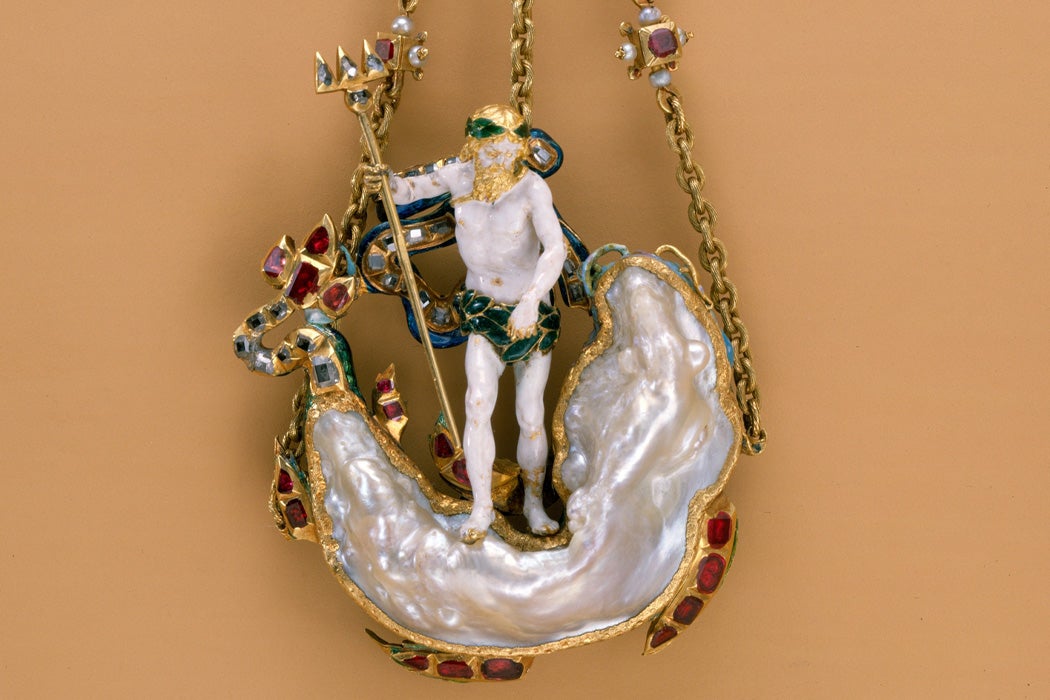 Pendant in the Form of Neptune and a Sea Monster, early 17th century
via The Met
By: Amelia Soth
5 minutes
Share Tweet Email Print

Anna Maria Luisa de’ Medici, the last of her line, never had a child, but she did have a tiny replica of one. Her plump-cheeked baby is still on display in the Palazzo Pitti in Florence. Its sleeping face is carved from pearl, and it slumbers under a rumpled blanket formed from a lumpy pearl.

Who’s looking after the baby? It has a family of sorts: a grim-faced fiddling mermaid, a comical soldier, an ostrich clutching a jewel in its talons. It’s a ragtag crew, but they have something in common: their limbs and heads sprout from pearl bodies. A trilobed pearl forms the mermaid’s bust; a cloven one, capped with tiny boots, acts as the soldier’s legs; the ostrich’s body is a pearly glob. This was Anna de’ Medici’s collection: a little menagerie of pearl monsters.

We use “baroque” to signify all things lavish, florid, and grotesque. For that, we have misshapen pearls to thank.

There’s a specific term for these irregular pearls: “baroque,” from the Portuguese barroco. These pearls were baroque before anyone thought to apply the term to the music of Bach and Vivaldi, the sensuous paintings of Caravaggio and Rubens, or lavish cathedral architecture. Even today we use “baroque” to signify all things lavish, florid, and grotesque. For that, we have misshapen pearls to thank.

Irregular pearls like these ones served as three-dimensional Rorschach tests for sixteenth- and seventeenth- century jewelers. In the jeweler’s hands, the warty surface of the pearl could become a swan’s downy stomach, an expanse of rocky ground, or Hercules’ muscular back. What makes these pieces so delightful is that, no matter how ingenious the figure around it, the pearl in the center can never be perfectly integrated. It shines out, fleshy and bulbous, giving even the loveliest pieces of jewelry a diseased quality.

Then again, a pearl is a kind of pathology—or at least, a reaction to one. It’s the mollusk’s defense against an invader, whether it’s a speck of grit or a parasitic fluke. The mollusk enrobes its enemy slowly in layer after layer of gleaming nacre; the pearl becomes the invader’s tomb. From the centers of pearls, scientists have exhumed tiny crabs, tapeworms, snail shells—even, sometimes, entire fish. In this way, pearls have less in common with other precious gems and more in common with pimples—or with the gnarled galls that swell from the trunks of wasp-infested oaks.

For centuries, however, more romantic theories of pearl formation predominated. The Physiologus, a second century Greek bestiary, stated that the oyster “swallows the heavenly dew and the rays of the sun and the moon and the light above.” The pearl is thus born from a marriage of heaven and earth. A pearl, Clement of Alexandria wrote, was like “the luminous and most pure Jesus who was born by the Virgin from divine thunderbolt.” Although theories of pearl formation as a reaction to a wound were already in circulation by the seventeenth century, the allure of these legends still lent the pearl some extra luster.

When the Spanish began to colonize the Americas, in the early sixteenth century, they quickly discovered a rich and abundant source of pearls. Witness Jacopo Zucchi’s Allegory of the Treasures of the Sea, in which the Americas are envisioned as a bountiful fountain of pearls, just waiting to be strung and slung around Florentine necks. Irregular pearls were in high demand. King Charles V of Spain asked his officials to pick out the baroques for him when they claimed the crown’s portion of the harvest.

“So many cities razed, so many nations exterminated, so many millions of people put to the sword, and the richest and most beautiful part of the world turned upside down, for the traffic of pearls and pepper,” wrote Michel de Montaigne in 1580. A vast apparatus of cruelty and exploitation carried these pearls from their native seas to the necks of the monarchs who wore them. Slavery was the basis of the pearl trade, and pearl diving was a particularly lethal occupation. In an era before diving suits or scuba gear, divers travelled from the surface to the seabed and back on a single breath.

But pearls are a difficult commodity to control: discrete and tiny, they are easy to hide, and they require no polishing or cutting to reveal their beauty. When the pearl divers cracked open their finds, they made sure to slip the best pearls up their sleeves or even swallow them. As a result, the boat owners were forced to hold events called “caconas,” hoping to induce the divers to hand over their valuable finds by offering them imported goods in exchange. Some divers even managed to buy their own freedom with pearls they had secreted away.

We don’t know where the pearl that forms Anna Maria Luisa de’ Medici’s baby came from—what seabed it grew in, which mollusk nurtured it, who held their breath to pluck it from the sand, or what dangers and rewards it held for them. Despite its appearance of slumber, it is no peaceful artifact.

Editors’ Note: The phrase “wasp-infected” from an earlier version of this article has been changed to “wasp-infested.”

Baroque Pearls
By: Elizabeth Rodini
Art Institute of Chicago Museum Studies, Vol. 25, No. 2, Renaissance Jewelry in the Alsdorf Collection (2000), pp. 68-71+106
The Art Institute of Chicago
Matter and Meaning of Mother-of-Pearl: The Origins of Allegory in the Spheres of Things
By: Beate Fricke
Gesta, Vol. 51, No. 1 (January 2012), pp. 35-53
The University of Chicago Press on behalf of the International Center of Medieval Art
Montaigne and the Cannibals: Toward a Redefinition of Exoticism
By: Roger Celestin
Cultural Anthropology, Vol. 5, No. 3 (Aug., 1990), pp. 292-313
Wiley on behalf of the American Anthropological Association
A Political Ecology in the Early Spanish Caribbean
By: Molly A. Warsh
The William and Mary Quarterly, Vol. 71, No. 4 (October 2014), pp. 517-548
Omohundro Institute of Early American History and Culture