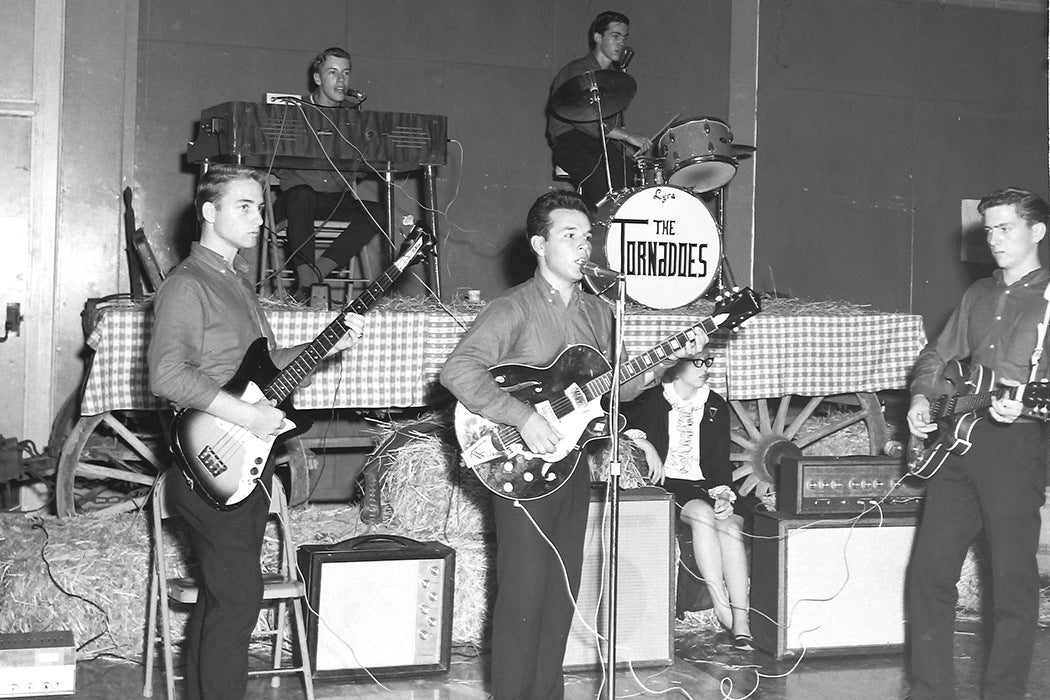 “Sea of Dudes” is my next band name.

We’ve seen how important it can be to name places meaningfully and how, in a way, it’s become a lost art. Of course there’s a hidden art to naming many things of cultural interest, and there are shifts to keep in mind, such as the changing fashion in people’s names from different eras, the names of status items such as cars, even startup company names… and yes, also band names.

“My next band name” has become a meme for a kind of tangential joyfulness in identifying the weird and wonderful phrasings in language… that can also double as your next band name. Consider such gems as “French Toast Emergency,” “The Thanksgiving Uncles,” “Librarians in Uproar,” or “Giraffe Aristocracy,” next band name submissions found on Reddit or the obligatory tumblr hosted by sci-fi author John Scalzi. Whether you like them as effective band names or not (some of them seem like they were actually generated by artificial intelligence), most people will get the joke—there’s something unusual, compelling or eye-catching about each of these expressions. They’re unexpected words to find together, they make you sit up and take notice.

There’s something else apart from this—a native speaker’s understanding of this subculture comes with a kind of social sixth sense about why phrases like these might make good band names. Compare the diverse mix of (real) band names like Godspeed You! Black Emperor, The Apples in Stereo, …And You Will Know Us by the Trail of Dead, Suburban Kids With Biblical Names, The The, and the almost unpronounceable !!! (Chk Chk Chk). The question is, with such a wide range of styles, how do we even know what makes a good band name?

For that matter, as Adrienne Lehrer has pointed out, in sentences like “John is hungry” vs “Fido is hungry” how do we know who we should probably give the dog food to? “John” and “Fido” are just arbitrary signs, but there’s something else that tells us one is likely to be human and one is likely to be a dog: the cultural context. That’s also a reason why Johnny Cash and Shel Silverstein’s “A Boy Named Sue” got so hot under the collar about his name that he was ready to kill the man who gave it to him: “My name is Sue! How do you do? Now you’re gonna die!” (You see, the world of onomastics, or naming, can get pretty exciting).

How do we even know what makes a good band name?

The answer to the question of why certain combinations of words make good band names, surprisingly, is related to the fact that people don’t really know what words mean, according to linguist Mark Aronoff. Rather, we connect words and names—even names that we may never have come across before—that exist in the same semantic space, absorbing their recurring patterns. It tells us a lot about how we might form new members of that class.

Consider the peculiarities of the marketing of car names. Aronoff shows how names of cultural items like car names inhabit particular semantic spaces. How do we really know what a Chevrolet is or understand what kind of prestige it’s supposed to convey if we’ve never come across that name before? Is it a luxury car or a budget-friendly one? What about a Cadillac or Bel Air or a Fairlane? What’s interesting here is that if you’re familiar with the American car, you can only really understand the value of a particular model not from the name alone (since it may have no particular meaning when it launches as a product), but from the other cars in the same space and where they’re placed. Aronoff points out that a car’s name, which might start out as a luxury brand, eventually can be downgraded and devalued over time as new marketing names take over, usually at the top of the hierarchy and old, lower prestige names are shelved (later to be revitalized as classic cars perhaps, through the magic of nostalgia).

So, that’s kind of odd if you think about it. Rather than getting the meaning through a single word, as we commonly think we do, we may need a class of words to define the true appropriateness of certain names. And these words and expressions can just come randomly from other sources, just as new parents, independently of each other, shift trends and fashions in baby names across eras as older, more common names are devalued.

When we think of classes of things that are rooted in nature, such as animal species, it’s easier (though still not quite black and white) to say that something belongs to a particular group. For example, some might have problems identifying a penguin as a bird, but would have fewer problems identifying, say, a sparrow as one. So there’s a sense in which each class has a stereotypical or prototypical form, as well as edge cases that don’t always fit so neatly into the paradigm—but at least they have a scientific classification to fall back on.

The unconventionality of rock n’ roll life is often expressed through unusual syntax or syntactic violations.

Not even We Are Scientists have come up with a workable scientific classification for band names. When it comes to cultural classes, we can’t depend on science, even though there is a still a system in place. We actually depend on others within the same linguistic and subcultural group to define the edges of meaning for us. So when we make up names for things, we’ll follow certain patterns and trends so that the name we come up with is appropriate and can be understood to be belonging to that class. Adrienne Lehrer follows on from Aronoff’s work and shows that car names do often follow the same patterns, such as being named after (speedy) animals (Impala, Jaguar, Mustang, Rabbit), places (Malibu, Bel Air, Torino, Monte Carlo), and astronomy (Mercury, Galaxie, Taurus, Nova) for example.

Meanwhile, back in the green room, Lehrer shows that there’s a variety of conventions for rock band names that can be used—as long as it’s unconventional. She finds, for example, that the unconventionality of rock n’ roll life is often expressed through unusual syntax or syntactic violations (e.g. The Who or Faster Pussycat or even !!! as we’ve seen), as well as language play and puns. In fact, band names can be linguistically very inventive and innovative, more so than other invented names for things like products or organizations, and are much less hemmed in by conventional constraints.

At the same time, there are still strong styles, particularly in sub-genres of music. Short names beginning with “The” and a common noun is an obvious pattern from the mid-twentieth century (“The Beatles,” “The Monkees,” “The Animals,” “The Kinks”)  that’s seen a revival in recent times. Lehrer focuses on the heavy metal genre as one of the classes with more obvious linguistic patterns… usually involving death (as I said, onomastics is terribly exciting, if not downright injurious to your health). Death (Megadeth, Slayer) of course, and other perils, such as dangerous animals (King Cobra, White Snake), weapons (Guns n’ Roses, Iron Maiden), drugs and unhealthy substances (Poison), and, er, religion (Black Sabbath, Leviticus).

In fact, the top overused words in the heavy metal genre, according to this list, which spawned the inevitable heavy metal band name generator are death, black, dark, blood, dead, hell, war, necro, soul, night, fall, hate, god, evil, kill. So it’s clear to see heavy metal bands have a lot on their minds. But more than just a bunch of gloomy words (which I’m claiming now as my next heavy metal band name), the patterns that exist in this genre and others tell us how we can recognize new band names as appropriately heavy metal, or indie rock, or hip hop, or the like. Although I suppose band names can sometimes draw meaning from their component words (Vampire Weekend, does it really do what it says on the tin?), it’s ultimately the existence of the other, similarly patterned names in the same semantic field that gives us a truer sense of whether your next band name is a good one. For names that might otherwise be meaningless, it makes all the difference to be guided by (other) voices.

Five new books out this week, and links to related content you won’t find anywhere else. Prose master ...