The Importance of Technological Change in Shaping Generational Perspectives

If we name each generation based on the technological conditions it experienced, generations may soon encompass only a few years apiece. 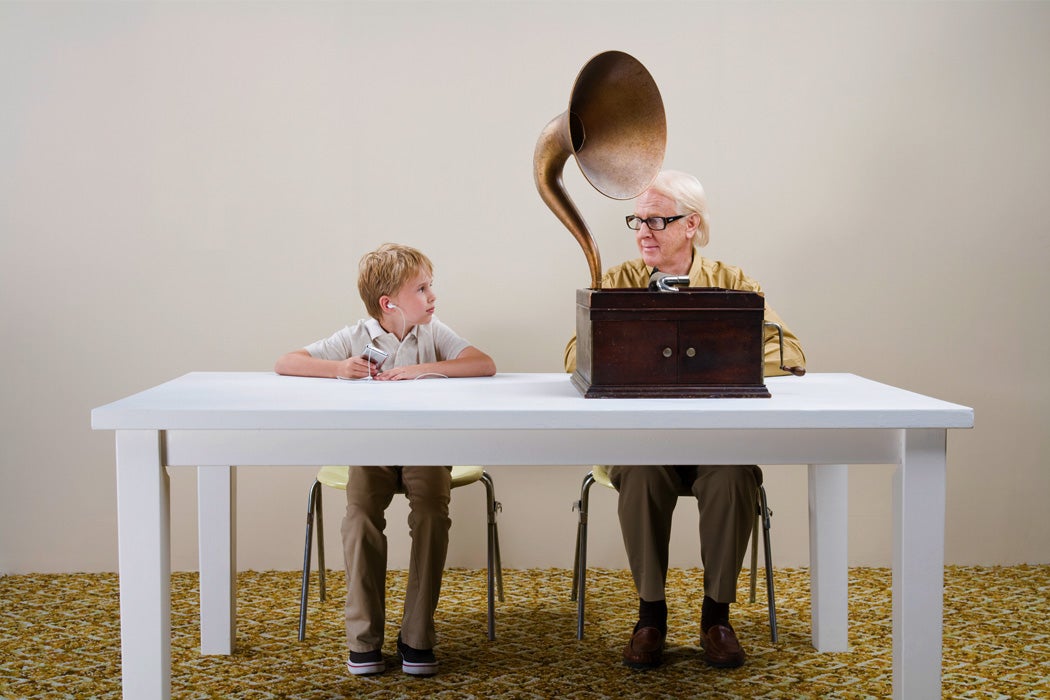 “There are a number of labels to describe the young people currently studying at school, college and university,” Ellen John Helsper and Rebecca Evnon wrote in a 2010 article in the British Educational Research Journal. “They include the digital natives, the net generation, the Google generation or the millenials. All of these terms are being used to highlight the significance and importance of new technologies within the lives of young people.”

What seemed noteworthy a decade ago is now commonplace: Slicing the population into ever-narrower generations, each defined by its very specific relationship to technology, is fundamental to how we think about the relationship between age, culture, and technology.

But generation gaps did not begin with the invention of the microchip. What’s new is the fine-slicing of generational divides, the centrality of technology to defining each successive generation. Both of these developments rest on a remarkably intellectual innovation: the idea of generations as socially significant categories.

In 1940, apparently, it was still possible to see inter-generational conflict as a novel and perplexing mystery.

By no longer limiting political power to a defined group but rather encouraging political participation across social strata, democracy eased youth into public life in a way other regimes had proven incapable of doing. At the same time, democratization paradoxically created generational categories. With aristocratic privileges abolished and republican duties diminished, the generation provided a fallback for social belonging: not everyone can belong to my generation, so the vestigial desire for distinction is satisfied, but at the same time, no one remains without a generation, so the democratic impulse toward equality is met.

Another important factor was centralization: “the spectacular rise of the bureaucratic state and its disciplinary instruments of control and categorization.” Last but not least, Hentea notes, was the role of technologization:

As technology advanced ever more quickly in the nineteenth century, differentiation based on age became even more important: the young had at their disposal tools their elders did not. The concentration of rapid technological change in urban centers led to youth gaining economic and social advantages at the same time that the transmission of accumulated knowledge and experience from elders lost its relevance for changing industries.

If the role of technology in shaping an emergent generational consciousness seems obvious to us now, however, it far from evident to earlier observers. “Why does contemporary western civilization manifest an extraordinary amount of parent-adolescent conflict?” Kinsley Davis asked in his article “The Sociology of Parent-Youth Conflict.” In 1940, apparently, it was still possible to see inter-generational conflict as a novel and perplexing mystery.

To one of Davis’ contemporaries, the answer was clear: “the two generations in question have lived under such different economic conditions,” wrote Julien Brenda in a 1938 article, “The Conflict of Generations in France.” “The old generation was a happy one—unusually happy, I venture to say; the young generation is unhappy, hard pressed by circumstances.”

“A decade to-day is the equivalent of a generation, and standards and values topple over like ninepins.”

Wallace Stegner picks up the theme of generational angst in his 1949 article, “The Anxious Generation.” Writing of the twenty-somethings who came of age during or just after World War II, Stegner says:

They could no more have missed awareness of the tension and fear in their world than a bird could avoid awareness of wind. Far more has been taken from them than had been taken from preceding generations: politically, only uncertainty and fear and the Cold War is left them; the atom bomb is a threat such as the world has a never faced; if by a miracle we escape another war and the bomb, there is always the longer-term disaster of an incredibly multiplying world population and the shrinkage and wastage of world resources and the diminishing of world food supplies.

No serious student attributes the evils of the age to its machines. Popular essayists sometimes write as though tanks and airplanes were responsible for the bloodshed which is now going on, and novelists occasionally draw pictures of the horrors of a future in which life will have become wholly mechanized, with babies germinating in test tubes, “scientifically” maimed for the “more efficient” performance of industrial tasks. But this of course is literary nonsense…

Just a few years later, however, A. J. Jaffe would take a very different position in the pages of Scientific Monthly. “Of the factors causing change in our society, one of the most important is technology—important new inventions as well as minor technical innovations,” Jaffe wrote in “Technological Innovations and the Changing Socioeconomic Structure.” Making the case for the importance of studying technological change, Jaffe argued that:

Perhaps the single most important reason for studying technological change is to afford society a mechanism for predicting the social changes which are expected to occur… any thinking that will permit a society to better adapt itself to the inevitable changes which will occur—changes stemming in large measure from technological innovations—will be better able to meet such changes.

If that seems like a rather rapid turnaround on the importance of technological change in shaping generational perspectives, well, the pace of change was very much the point. In a 1945 article, “Characteristics of an Age of Change,” J. B. McKinney observed that “change, which was hitherto a gradual process, has become, for us, cataclysmic; it has become a tidal wave that threatens to overwhelm us. A decade to-day is the equivalent of a generation, and standards and values topple over like ninepins.”

From this rapid change, it was perceived, sprang generational discord. In his 1940 article, Davis argued that:

Extremely rapid change in modern civilization… tends to increase parent-youth conflict, for within a fast-changing social order the time-interval between generations, ordinarily but a mere moment in the life of a social system, become historically significant, thereby creating a hiatus between one generation and the next. Inevitably, under such a condition, youth is reared in a milieu different from that of the parents; hence the parents become old-fashioned, youth rebellious, and clashes occur which, in the closely confined circle of the immediate family, generate sharp emotion.

This 80-year-old assertion does an excellent job of anticipating our current tendency to label a new generation every decade, based on its unique relationship to emergent technology. Smartphones have only been in widespread use for a decade, but they’re now so fundamental to our daily lives that it’s hard to remember life without them. How could we possibly see those who can remember life before the smartphone as part of the same generation as those who’ve known nothing else? How could we see kids who’ve grown up on YouTube as part of the same generation that still watched actual TV? Doesn’t the leap from Facebook to SnapChat constitute its own profound generational divide?

As the pace of technological innovation continues to accelerate, and as each successive round of innovation becomes more widely disseminated, it’s hard to imagine a return to the days when sociological generations spanned multiple decades. If you believe that technological conditions profoundly shape the life experience and perspectives of each successive generation, then those generations will only get narrower.

But that accuracy will come at a price. If we name each generation based on the specific technological conditions it experienced during childhood or adolescence, we may soon be dealing with generations that encompass only a few years apiece. At that point, the very idea of “generations” will cease to have much utility for social scientists, since it will be very hard to analyze attitudinal or behavioral differences between generations that are just a few years part. We’ll have come full circle, back to the early nineteenth century, when the only way to think of generations was in terms of biology, not sociology.

Digital natives: where is the evidence?
By: Ellen Johanna Helsper and Rebecca Eynon
British Educational Research Journal, Vol. 36, No. 3 (June 2010), pp. 503-520
Wiley on behalf of BERA
The Problem of Literary Generations: Origins and Limitations
By: Marius Hentea
Comparative Literature Studies, Vol. 50, No. 4 (2013), pp. 567-588
Penn State University Press
The Sociology of Parent-Youth Conflict
By: Kingsley Davis
American Sociological Review, Vol. 5, No. 4 (Aug., 1940), pp. 523-535
American Sociological Association
The Conflict of Generations in France
By: Julien Benda
Foreign Affairs, Vol. 17, No. 1 (Oct., 1938), pp. 65-77
Council on Foreign Relations
The Anxious Generation
By: Wallace Stegner
The English Journal, Vol. 38, No. 1 (Jan., 1949), pp. 1-6
National Council of Teachers of English
Technological Innovations and the Changing Socioeconomic Structure
By: A. J. Jaffe
The Scientific Monthly, Vol. 67, No. 2 (Aug., 1948), pp. 93-102
American Association for the Advancement of Science
Characteristics of an Age of Change
By: J. B. McKinney
The Australian Quarterly, Vol. 17, No. 4 (Dec., 1945), pp. 55-65
Australian Institute of Policy and Science

We shouldn't see changes in Americans’ sex lives as a single phenomenon with an overarching cause.