The History Behind the Roller Skating Trend

Since its invention in 1743, roller skating has been tied to Black social movements. 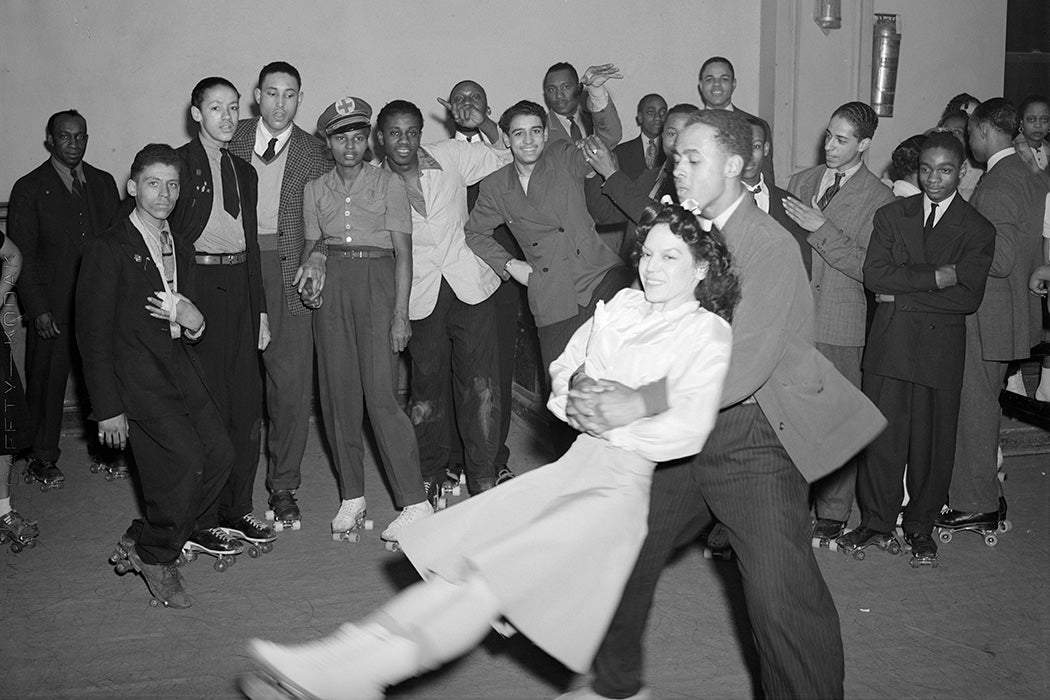 In a joyful antithesis to panic buying, many U.S. stores are reporting stock shortages of roller skates, and roller skating stories are appearing on major news sites. Maybe the latest rise in roller skating shouldn’t have been so unexpected. After all, the sport has always been deeply intertwined with the zeitgeist—and with mass marketing. Children and adults alike are looking for pandemic-appropriate summer activities that provide mental relief from “Everything That’s Going On.” Although skating is a fundamentally solitary action—truly, we all skate alone—it is something we can also enjoy en-socially-distanced-masse.

In the U.S., our mental image of people skating may involvs a blonde woman in Daisy Dukes skating by the Pacific Ocean or a bell-bottomed disco enthusiast skate-dancing to ABBA in hot polyester. But the first recorded use of skates took place more than two centuries before any of that, in a 1743 theater production in which actors affixed wheels to their footwear to mimic ice skating on the stage. The wheeled debut of inventor John Joseph Merlin made a lasting impression on the historical record.

Known for his eccentric personality and flamboyant clothing, the Belgian-born Merlin used skating as a way to get more attention for his other inventions, like this weighing machine. He designed the first roller skates after he moved to London from Huy, Belgium, in 1760. Unfortunately, his skates lacked brakes, and he lacked balance. As he attempted to skate through a masquerade party while playing a violin, he promptly plowed into a mirror, broke his instrument, and ended up with severe injuries.

It wasn’t long before other intrepid inventors realized the potential of roller skates. The French inventor M. Petitbled patented a three-wheeled inline skate model in Paris in 1819. But it wasn’t until 1863 that James Plimpton “revolutionized the roller skate” by designing quad skates, according to the National Museum of Roller Skating. Plimpton didn’t stop there. Along with the product, he also manufactured demand. He established the New York Roller Skating Association; opened the first skating rink at a Rhode Island resort in 1866; and gave skating lessons during the 1870s. His real genius, however, lay in marketing roller skating as an appropriate activity for men and women to do together, allowing young Victorian couples to meet without reprisal or rigid chaperoning.

Perhaps that’s why roller skating has yet to be taken seriously as an Olympic sport: it’s just too much fun.

Contemporary skating still has a trace of that romantic Victorian whimsy, something that other roller sports, like in-line skating, skateboarding, and especially ice skating—with those weaponlike blades scraping across a frigid floor—simply don’t have. Perhaps that’s why roller skating has yet to be taken seriously as an Olympic sport: it’s just too much fun. With a relatively low barrier to entry, roller skating also fits into a personal exercise regimen more than other sports. While a decent pair of skates may set you back as much as $150, that is really the only necessary investment. There are no monthly gym fees, and you can skate anywhere there’s smooth pavement.

That being said, many people prefer to skate in rinks. By the 1880s, manufacturers were mass producing skates, and rink-building followed soon after, mainly in New England.

The medical field took notice of this craze. “There is certainly at present a morbidly exaggerated passion for, and indulgence in, rollerskating,” wrote the authors of “The Medical View of Roller Skating,” published by Scientific American in 1885. Still, they had to admit that:

…[c]onsiderable inquiry has failed to elicit any facts showing that roller skating, temperately indulged in, does any harm to growing children, or produces any diseases and injuries peculiar to the sport… In proportion to the immense number of persons who have been engaged in propulsive divagations upon polished floors during the past winter, the pathological outcome has been small.

London, too, caught “rinkomania” and, in a 1913 article in the British Medical Journal, doctors prescribed indoor roller skating as a “valuable form of exercise.” They also noted that skating to the music provided at rinks made it easier for skaters to plan and pace their efforts. To truly maximize the health benefits, they explained, one must be prepared to become a hot, sweaty mess:

Exercise for the sake of health may be regarded, practically, in terms of increased output of muscular energy, stimulus to the circulation, and increase in perspiration. Unless free perspiration follows the exercise the skater will not derive the full benefit possible.

British doctors recommended rink skating as part of an exercise program that should also include “gymnastics, dancing, fencing, and indoor tennis.”

At the same time, inventors were trying to promote skating as a mode of outdoor transportation. In a 1917 issue of Scientific American, authors advised commuters to strap on skates to get to work. Their key selling point: unlike other vehicles, skates can be taken into the building with you. So confident were they in skates’ potential for civilian transport, they even posited military use:

Like most pleasure vehicles the improved skate will eventually be used for business purposes to a more or less extent, believes the inventor; and it is even possible that it may be extensively used by armies for the rapid transportation of soldiers in certain favorable localities.

Military skating never took off, but skating rinks themselves became sites of racialized conflict almost as soon as they were open. Boston’s Black community protested when a manager barred two Black skaters from his rink saying, “I allow no colored persons to skate on my floor…. I would not break the rule even for Fred Douglass.” Segregated rinks remained the norm through the Civil Rights era, and white people protested to keep them that way. Even after the Civil Rights Act, skating rinks retained de facto segregation through “urban” or “adult” themed skating nights aimed at Black skaters. According to the documentary United Skates, the sport remains integral to many Black people, who have developed numerous regional skate styles associated with specific cities

For nearly two decades, women roller skaters of all races, sizes, and sexual orientations have also been challenging what athleticism, sensuality, and femininity can be through the biggest millennial skating trend: roller derby. The full-contact sport gained worldwide popularity after the release of the derby documentary Hell on Wheels and the Drew Barrymore-directed film Whip It (full disclosure: my derby team captain was in this movie). Roller derby is known for having a gritty post-punk aesthetic, with players decked out in costume-like uniforms, and sometimes fishnets and makeup. As a result, scholars have criticized it as a performance for the male gaze. But the feminist scholar Ula Klein believes derby to be a vehicle of female empowerment that offers opportunities for leadership, camaraderie, and inclusion.

In “Transporting into Academia Lessons from the Body Slam,” the Jewish and Mexican American writer Lee Ann Epstein offers a highly personal account of her experience with ethnicity, womanhood, and roller derby, which helped dismantle her “deeply internally colonized outlook on how I should carry myself.” Epstein describes an experience playing the sport:

I was sweaty, cussing, and vomiting in a patch of grass from over-exhaustion. My fishnet stockings were torn, and ants started to bite my hands before I could lift my face out of the grass. What the hell was I doing here? Some girl intentionally pushed me onto the asphalt, which grated my nalgas [buttocks] like a piece of cheese. I’m sure everyone in that parking lot got a good show. Notably, we weren’t fighting. We were practicing roller derby. Roller derby subverted all of my good schoolgirl values into an aggressive, abrasive sport. Despite my internal conflict, I loved every painful and wonderful moment.

For Epstein, everything from her derby name (“Matza Brawl”) to getting her nose broken helped decolonize her thinking and prepared her for being a woman in academia, which, like sports, tends to be male-dominated.

In a poem simply titled, “Rollerskates,” the writer David Longstreth also uses roller skating to explore themes of othering and assimilation. While it is unclear whether he is a skater, Longstreth uses the activity as a metaphor for the way his immigrant family traveled through life, in contrast to the walking and running of the dominant culture in which he found himself. In a particularly poignant passage, he writes:

My first step
was really a first roll

And that’s the way I learned to get around
The way my parents did
Fluidly, gracefully, efficiently
Naturally
The momentum of countless generations
of grandparents all wheeled and proud

Since Merlin first invented skates, roller skating has reflected aspects of our individuality, as well as our relationships to other people and collectively important events. As 2020 progresses, perhaps roller skating can also serve as a physical metaphor for forward movement, a process of false starts and failed attempts and constant course correction, hopefully careening toward greater empathy and equity.

Share Tweet Email Print
Have a correction or comment about this article?
Please contact us.
consumerismsportsChicana/Latina StudiesHumboldt Journal of Social RelationsInternational Journal of Feminist Approaches to BioethicsJournal of the Civil War EraLondonScientific AmericanThe British Medical Journal 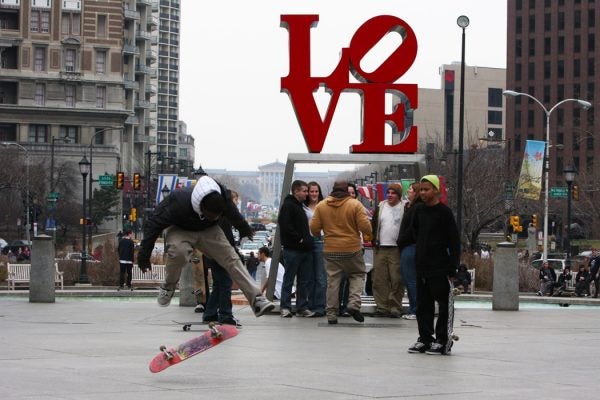 Skateboarders: The Shock Troops of Gentrification

In Philadelphia's Love Park, gentrification had an unlikely face.