The Codpiece and the Pox

A brief history of the codpiece, that mysterious garment favored by 16th-century gents who just may have been covering up their cases of syphilis. 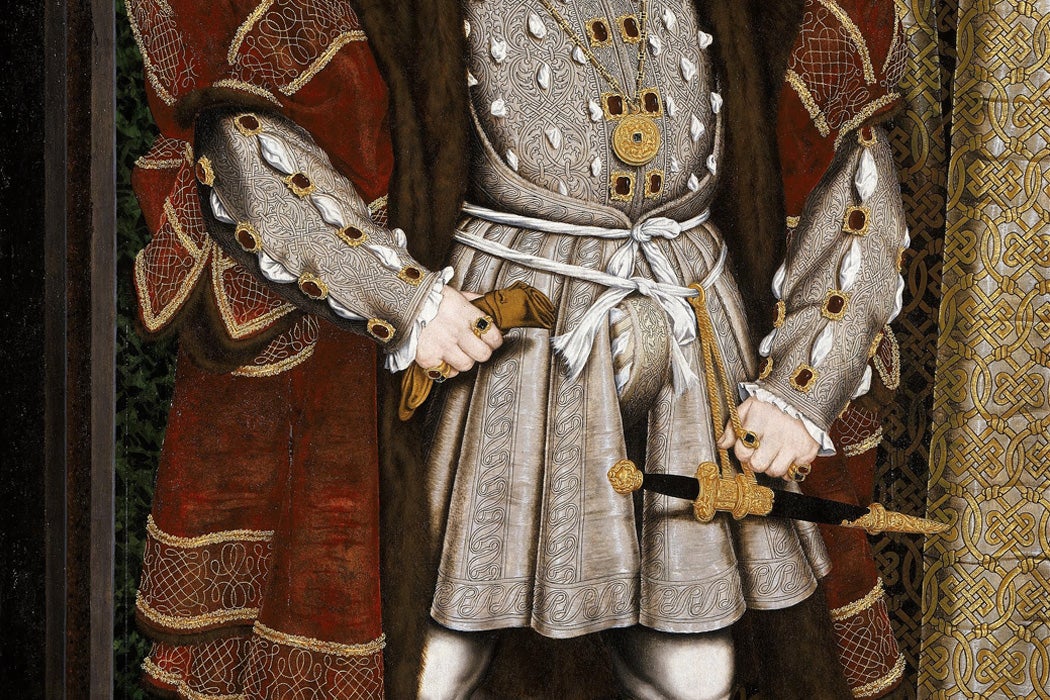 Actor Mark Rylance wore a codpiece as part of his costume for the role of Thomas Cromwell in Wolf Hall, but noted that historical accuracy was sacrificed to appeal to the sensibilities of contemporary audiences. His codpiece was toned down because viewers “may not know exactly what is going on down there,” particularly in America.

What exactly was going on down there remains a topic of historical inquiry. “The visible penis sheath worn in the 16th century,” writes cultural anthropologist Grace Q. Vicary, “has long been an enigma to social historians, ethnologists, and social psychologists.” Some have argued that the codpiece’s prime function was “phallic connotations of aggressive virility display.” Vicary thinks this idea is the product of the later Puritan age.

There was a “functional link between the codpiece” and the sexually-transmitted syphilis epidemic that swept through Europe starting in 1494.

Since actual garments from the time are almost nonexistent, Vicay studied the drawings and portraits of men in contemporary clothing that began to be produced around 1500. Codpieces changed across time and place. Such coveralls kept the genitals from being thumped by the “various daggers, purses, tools, whisks, pomanders, or swords which Renaissance men hung from their belts.” But Vicay also argues that there was a “functional link between the codpiece” and the sexually-transmitted syphilis epidemic that swept through Europe, starting in 1494.

Treatments for this virulent outbreak included ointments made from arsenic, sulfur, black hellebore, pine resin, and a “whole galaxy of herbs, minerals, syrups, and decoctions.” One thing that did work was mercury—in fact, it would be used to fight syphilis until 1910. Topical application, in a mixture with grease, necessitated “a practical artefact—a large, boxy penis container which (1) would hold layers of bandages in place, (2) would keep the grease, or other drug stains from spreading to stylish” clothing. Such codpieces could also contain the pus associated with the disease.

Vicay argues that German mercenaries came up with this medicinal contraption by the 1510s. They were “the first sufferers of syphilis and its prime carrier through Europe.” Fashionable males, no strangers to the pox, adopted it by the 1530s.

Vicay makes the point that that those afflicted with syphilis were discriminated against, since “social diseases” were stigmatized. So, if every mercenary wore one of these newfangled codpieces, none would stand out for having an STD. Soon enough, wearing a codpiece lost its association with the syphilitic:

When kings wore a new style of clothing, it was soon emulated by all who could afford it… A universal function of any clothing or adornment is communication of social and sexual status through varying shapes, colors, materials texture and decoration, so of course the codpiece also fulfilled this function.

The Renaissance codpiece faded from fashion by the 1590s, but the concept did not entirely disappear. Vicay cites the “D.A.B.D. Aprons” in a Montgomery Ward catalog of 1900. These were worn, to quote the catalog, to “keep the clothing and bedding from becoming soiled when afflicted with gonorrhea or gleet.”

When sex work was considered a "necessary evil," legal brothels provided certain protections for the women who worked there.