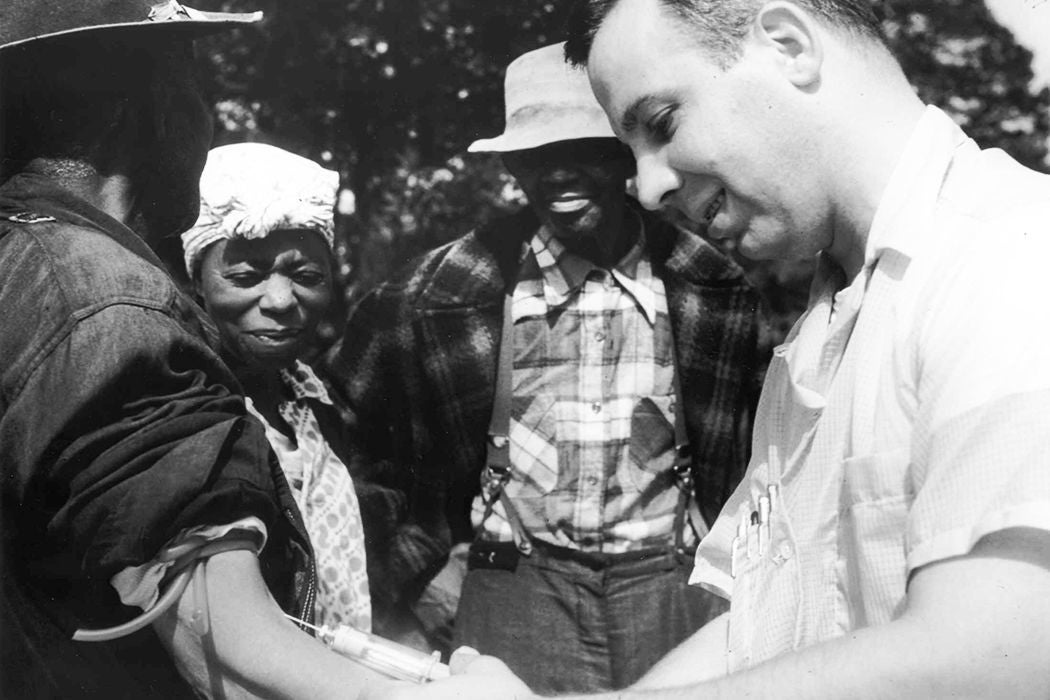 The now-infamous 1932 Tuskegee Syphilis Study was conducted by the U.S. Public Health Service in Macon County, Alabama. During the experiment 600 impoverished black men were studied, 399 of whom had syphilis that went untreated although the health care practitioners knew of their illness. The men were never educated about syphilis, were never told of their status or treated, although treatments did exist; they were merely told they were being seen for “bad blood.” The men underwent painful procedures like spinal taps under the guise of “free healthcare,” and were “compensated” with meals and burial insurance. The intent of the study was never even to actually help the patients, but rather to examine the course of untreated dormant syphilis in black men.

Decades after the Tuskegee Syphilis Study health statistics continue to illustrate the lack of trust black Americans have for healthcare professionals.

Men in the study were not allowed to access other treatment services in the area. Not only did the syphilis harm the men, many of their wives and even some of their children contracted the disease. Despite the fact that codes like the Nuremberg Code of ethics was created during the Tuskegee study, and that by 1947 penicillin had become a standard, effective treatment for syphilis, the experiment continued. The study was initially intended to be six months but continued until 1972.  It did not provide as much insight on syphilis research as it did about racism in health research.

Decades after the Tuskegee Syphilis study health statistics continue to illustrate the lack of trust black Americans have for healthcare professionals. Looking at the context and history of the beliefs can help us make sense of the trends. In the 1990s a notable chunk of the African American community believed that the government created AIDS. A 1997 study illustrated cited 32.1% of the black women surveyed agreed with a statement that scientists were not trustworthy. This significantly deviates from the 4.1 % of white women in the study who agreed with the aforementioned statement. This was despite the fact that over 80% of women surveyed recognized the benefits of medical research for society. The newer findings delve specifically into how this mistrust of the health profession has had negative impacts on black people’s health.

While tenets of equity in healthcare research appear to be universal, there is a long history of disparity when it comes to the distribution and quality of healthcare amongst individual people. The Hippocratic oath compels new doctors to make blanket commitments to ethics and accountability while serving humanity regardless of gender, race, religion, political affiliation, sexual orientation, nationality, or social standing. And yet this oath belies a legacy of racism in medicine.

Communities that have experienced such painful histories of being used as lab rats understandably may not be inclined to engage with healthcare providers. Beneficence and non-maleficence are cornerstones of health care provision, at least if you look at codes we like to think all healthcare providers adhere to. But fidelity was not upheld with Tuskegee and the ripple effect is evident today. Oaths do not guarantee an obligation to morality or veracity in healthcare, people do.