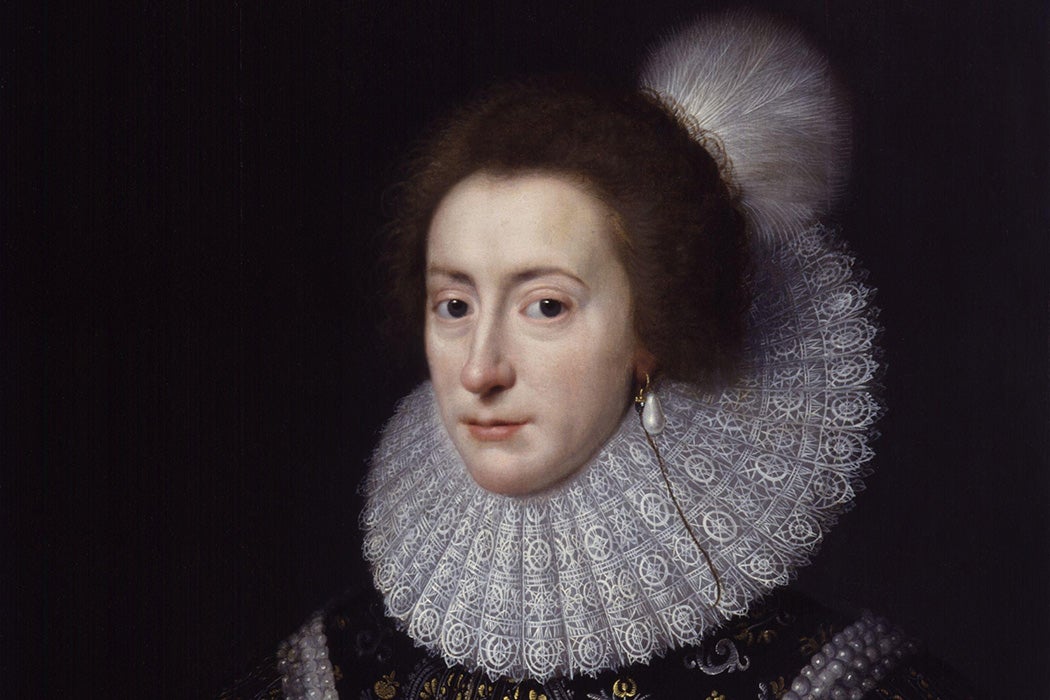 In the portrait above of Elizabeth Stuart, Queen of Bohemia, two treasures hang from the queen’s ear. One is a precious pear-shaped pearl. The other is a dark strand, fraying at the end. Closer examination reveals that it is a plait of hair—not one of her own chestnut locks, but someone else’s black braid. It is an ugly little thing, like a rat-tail. But it follows Elizabeth from portrait to portrait: It dances in the breeze as Elizabeth struts on horseback with her husband. It coils beneath her chin in a petulant paired portrait.

The braid was a treasure because it belonged to a loved one: her brother, Charles I of England. The queen was in exile, and her precarious situation depended on her brother’s goodwill. Perhaps wearing the braid reminded her of the ties that bound her brother to her aid—or the slender cord of hope from which her fortunes hung.

Her brother, meanwhile, was rocking his own iconic hairstyle—soft, shoulder-length waves on the right side, and cascade of fluffy curls down the left shoulder. The style was called a “lovelock,” and it was meant to symbolize devotion to your beloved. It was worn on the left side, so that the long tresses would always grow toward one’s heart. Today, the king’s funky, asymmetrical hairdo is immortalized in Anthony van Dyck’s Triple Portrait.

Worn long, gently frizzled with hot tongs, and adorned with a bright ribbon or a gleaming pearl, the lovelock was an indispensable ornament for the English gentry. Consider the truly impressive lovelock worn by Sir Thomas Meautys, which rolls down his shoulder in a rippling wave, all the way to the elbow—or the van Dyck portrait of the seven-year-old Prince Charles, in which the tiny prince is sporting his own small, fluffy lovelock.

The fashionable long-haired style even inspired the Puritan William Prynne to pen a vitriolic tract entitled The Unloveliness of Love-Locks. In it, Prynne tells the tale of a nobleman who, after falling ill, was struck with the revelation that his long curl was nothing but a rope for the Devil to drag him down to Hell. On recovering, he had his lovelock chopped off.

The King’s detractors cropped their hair so short that they were mocked with the nickname “Roundheads.”

In fact, due to its association with the unpopular King Charles I, the lovelock became the symbolic center of a culture war. Tension between Royalists, who believed in the absolute power of the King, and Parliamentarians, who believed in limiting the King’s authority, played out on the sartorial battleground of the citizen’s heads: the King’s supporters showed their allegiance by copying his flowing tresses, while his detractors cropped their hair so short that they were mocked with the nickname “Roundheads.”

The simmering conflict erupted into civil war, and, ultimately, King Charles found his head on the block, majestic curls and all. But not all his curls made it to the grave with him. The king’s diehard supporters considered him a martyr, and they wanted relics. Locks of the dead king’s hair were snipped away and set into rings, under panes of crystal.

While absolute monarchy suffered a blow in England, in France it had reached its glorious peak in the person of Louis XIV, the Sun King. While Louis XIV proclaimed “L’État, c’est moi” (“I am the state”), his barber, George Binet, expressed the same sentiment in sartorial terms, declaring that he would happily “pluck the heads of all the king’s subjects to cover that of the king.”

For me, the image brings to mind Thomas Hobbes’ Leviathan, which Hobbes wrote in response to Charles’ execution as a defense of absolute monarchy. The frontispiece to the book succinctly expresses Hobbes’ image of the ideal state: a vast and monstrous Sovereign looms over the countryside; his body is comprised of his multitudes of ant-sized subjects. Only for the Sun King, we must add to the portrait a towering pompadour, made from piles and piles of his subjects’ hair.

Indeed, the Sun King’s towering tufts of false hair spurred an appetite for wigs. In the early eighteenth century, fashionable hairpieces sometimes stood up to two feet tall. They were so vast that they became little worlds in themselves, housing flower-vases, model ships, and miniature windmills. Elizabeth’s plait was an ugly thing made precious by its connection to a person she loved. By comparison, the fabulous wigs that bedecked the nobles of the early seventeenth century were each compounded from the gathered locks of perhaps dozens of anonymous peasants. The rich puffed up their periwigs with the shorn tresses of the poor.

A parting note: In 1813, more than a century and a half after his execution, King Charles I’s coffin was accidentally discovered in the walls of St. George’s Chapel at Windsor. King George IV—then Prince Regent—had the body exhumed. There they found the King, decayed but still recognizable. The hair at the back of his head was cropped close, snipped away for mementos. George IV, not to be outdone, helped himself to a clipping or two of his ancestor’s hair. Then he had the coffin soldered up. Today, the hair resides in a bejeweled locket in the royal collection.