The Adventurous Life and Mysterious Death of Frank Lenz

In 1892, the master cyclist set out to tour the world on wheels. A few months later, he disappeared, never to be heard from again. What happened to Frank Lenz? 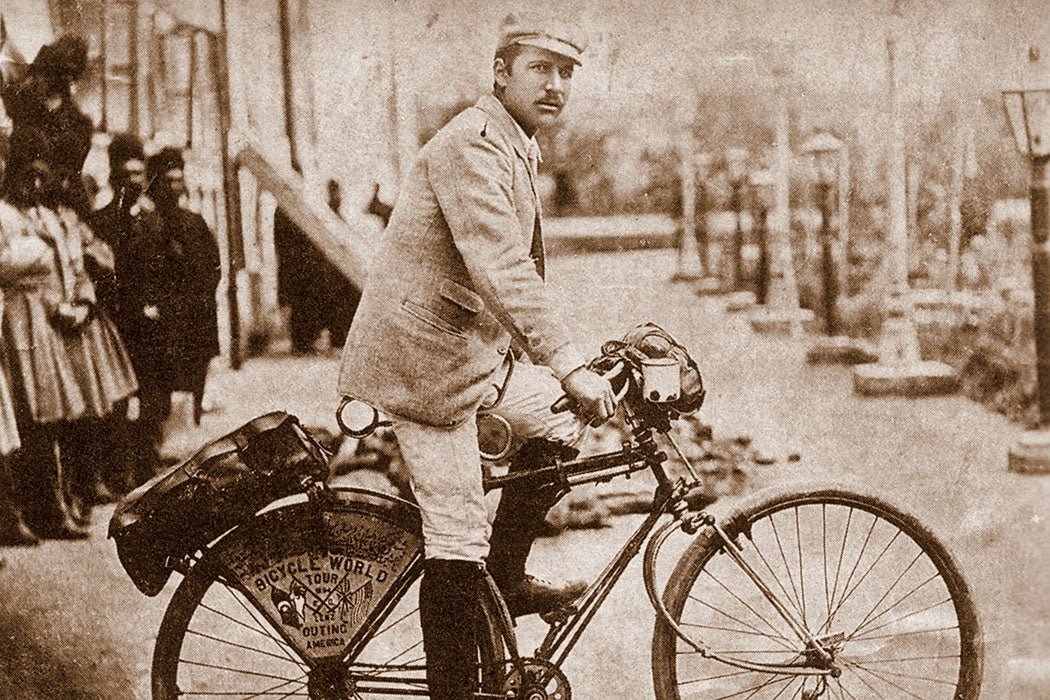 In 1886, Pittsburgh accountant Frank Lenz spent $100 on a bicycle—a full month of his wages. His new bike weighed fifty-five pounds and boasted a fifty-two-inch diameter front wheel. Though he might not have known it at the time, Lenz was about to enter a life of adventure. He’d see the world on a bike, becoming one of the sport’s earliest media sensations.

But Lenz would also be one of the sport’s most mysterious disappearances.

Lenz certainly built strongly on his initial financial investment. He joined a local cycling club and quickly began setting distance records. In one 24-hour period, explains journalist David V. Herlihy, “he rode 162 miles, setting a regional record.” Lenz, in love with biking, managed to combine it with another of his passions, photography. He brought his camera along on his rides, capturing photos of the routes and himself using timers or extended cables. He was following the lead of one of his idols, Thomas Stevens, who had completed a round-the-world trip on a high-wheeled bike in 1887, and he hoped that he could follow suit.

Lenz was a master of the high-wheeler, Herlihy continues, but there was a new arrival on the biking scene—the “safety” bicycle. This new bike was “distinguished by its two equal-sized wheels, the rear one driven by chain and sprocket.” And as much as Lenz wanted to see the world on wheels, he could see the writing on the wall; no one was going to sponsor his trip if he was riding an obsolete bike. He “grudgingly transitioned to the new low mount, recasting himself as an ardent proponent of the so-called ‘bicycle of the future.’” It worked, and in 1892, Lenz, backed by Outing Magazine, prepared to take his own global journey.

Riding a Victor safety bike, Lenz would travel “twenty thousand miles overland, heading east to west across the United States, Asia, and Europe.” The proposed trip would take two years, and Lenz would document the journey, sending dispatches to be published in Outing. It would not only propel him around the world, but into the history books as the first solo safety bike rider to ride around the world. As historian Wes Hardin explains, “He set off from New York City…intending to follow the Northern Pacific rail line westward to San Francisco. From there, he planned to board a ship, sail to Japan, and then wheel across Asia.”

There were detours, like a visit to Yellowstone National Park, where he eschewed the usual stagecoach ride, writing, “My ‘Victor’ was a good enough vehicle for me.” The difficult terrain, he added, would show “the utility of their Victor pneumatic tires.” It was well worth it, Lenz told his readers. “Take your pneumatic and see the Yellowstone Park awheel as I did.”

He then headed farther west, Asia-bound. He went to Japan, to China, to Myanmar (then-Burma), and on to India. From there, historian Duncan R. Jamieson writes, he went to the Middle East, where he “followed a caravan route to Teheran, and from there he turned his wheel toward Constantinople and a return to ‘civilization.’” But Lenz disappeared somewhere in eastern Turkey, and he was never heard from again.

Because of the era’s communication limitations, no one immediately knew he was missing. And as Jamieson explains, Outing didn’t rush to find him, “perhaps interested in milking the disappearance as a means to increase circulation.” Once the news did become public, reports indicated that he was last seen in the “village of Chilgani, in the Alasgird plains outside the Delibaba Pass.” But a month later, a new bulletin reported “that he had been killed in the vicinity of Koord Ali.”

In a search financed by Outing, fellow cyclist William Sachtleben concluded that Lenz likely had been murdered, though the full details were in question and Lenz’s body was never recovered. But Lenz went down in history books as an adventurer. In a eulogy, his publicist remembered him as “a phantom cycler whose spirit is yet unbroken, upon whose face there is no trace of fear, or hatred or revenge but a look of mingled kindness and determination.”