Defender of the poor tenants and evictor of the voracious landlords, a masked lucha libre wrestler rose from the ruins of Mexico City’s 1985 earthquake. 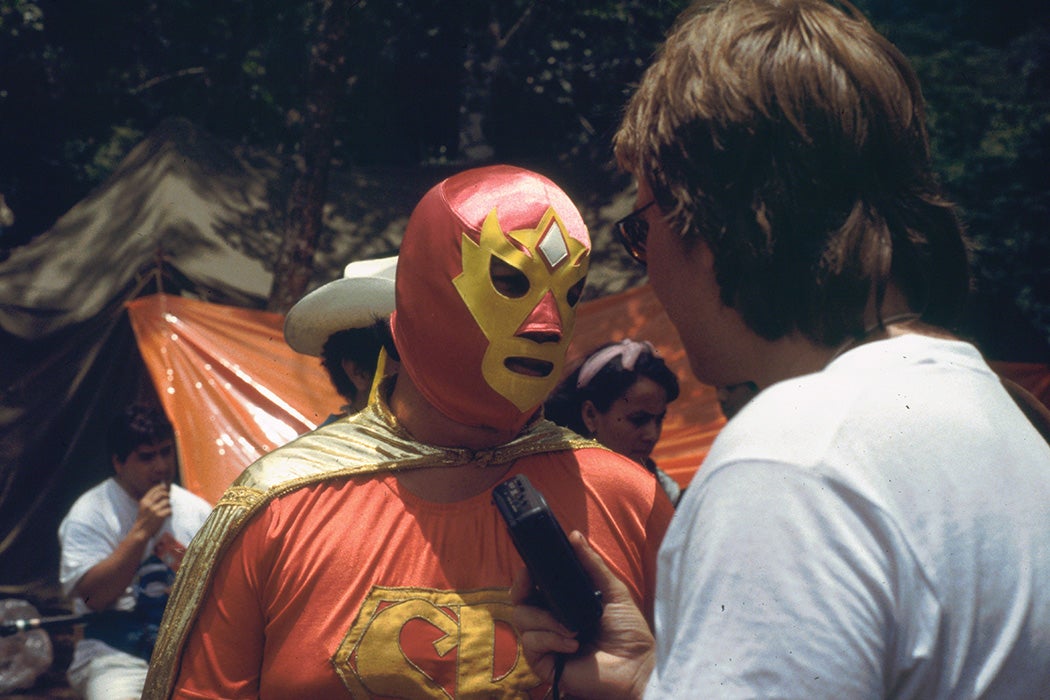 In photos, the collapsed building looks like a massive ribcage: steel girders twisted like a spine, concrete floors jutting diagonally toward the sky. This is the wreckage of the Nuevo León apartment building, destroyed by the 1985 earthquake that devastated much of Mexico City. Hundreds of thousands of people lost their homes. Ordinary people spent days sorting through the rubble to recover buried survivors. At the same time, in collapsed textile factories, shop owners rushed to save their expensive machinery—while leaving the seamstresses trapped in the ruins.

In the wake of the earthquake, the government proved slow to help the injured and displaced people. As one witness, Rodolfo Mora Rodríguez, recalls:

…the army came, and all of us civilians were kicked out; we were told that they had trained people… they didn’t let us do a blessed thing, but they didn’t do a blessed thing either… On the other side of the hospital fence, relatives stood night and day, asking, asking. They wanted to help… very valuable days were wasted when we could have saved the lives of many compañeros.

The words of Judith García, another witness, sum up the way many survivors felt after the quake:

The people who died didn’t die because of the earthquake; that is a lie. People died because of poor construction, because of fraud, because of the criminal incapacity and the inefficiency of a corrupt government that doesn’t give a damn about people living and working in buildings that can collapse.

In the vacuum created by the government’s failure to respond, a powerful network of mutual aid organizations arose to organize relief efforts and demand substantive action from the city. The seamstresses, remembering how their bosses had left their coworkers in the rubble, formed their first union, and a network of organizations known as the Asamblea de Barrios arose to demand housing for those still suffering from the aftershocks of the quake. Over the next few years, these fledgling organizations swelled to a mass popular movement that came to reshape politics in Mexico City.

When city officials were facing down the man in the mask, they couldn’t help but recognize that they had been cast in the role of the villain.

One of the most powerful tools in their arsenal was a pot-bellied man dressed as a lucha libre wrestler: Superbarrio. Every superhero worth his salt has an origin story. This is Superbarrio’s—or at least, the most colorful version of it:

I was evicted for the first time when I was eight years old, and the second time when I was eleven. I have felt the unfairness of the landlords, the abuse of police—those I have lived. When the earthquake came, I was one of those damaged… One day… a red light blew into my room and whirled everything around… when the light disappeared and the wind stopped blowing, I had on the mask and clothing… and a voice said to me, You are Superbarrio, defender of the poor tenants and evictor of the voracious landlords.

Just by appearing at rallies and meetings in his lucha libre mask and cape, Superbarrio recast reality into the vibrant colors of a comic book. Suddenly, Mexican city officials found themselves negotiating with a caped crusader—and, when they were facing down the man in the mask, they couldn’t help but recognize that they had been cast in the role of the villain.

A superhero running rings around disgruntled city officials served as an absolutely irresistible photo op. You can just imagine Mexico City’s equivalent of J. Jonah Jameson pounding his fists on his desk and shouting, “Get me more pictures of Superbarrio!”

It was fitting that Superbarrio took the role of a lucha libre wrestler. Just like WWE matches, the outcomes of lucha matches are predetermined. Similar to the “heels” and “faces” of WWE, lucha revolves around the struggle between “rudos,” who will stop at nothing to win, and “técnicos,” who rely on their skill rather than dirty tricks. The referee turns a blind eye to the cheating of the rudos, but cracks down swiftly whenever a técnico puts a toe out of line.

As lucha libre scholar Heather Levi writes, lucha functions as “a drama about corruption.” Or as Superbarrio put it:

By turning local politics into a wrestling ring, Superbarrio made the sport’s political parallels fully evident. In public matches across the city, he squared off against one symbolic villain after another, like Senator No, representing the intransigence of unhelpful politicians, or the Nuclear-saurus, representing the dangers of environmental degradation to the urban poor.

Like any masked lucha libre wrestler, Superbarrio’s real identity was kept a closely-guarded secret. In this way, he was able to assume the role of a universal symbol—the title of his biography is Todos Somos Superbarrio, “We Are All Superbarrio.” His anonymity also served to protect his integrity; unlike other movement leaders, he couldn’t be bought off or given a job—if he were, he would cease to be Superbarrio.

But perhaps the most powerful function of the mask is to ensure that, like any superhero, Superbarrio can appear wherever he’s needed. In 2001, during a March for the Rights of Immigrant Workers in Manhattan, he squared off in the ring against such villains as the Unionbusting Thug, the Billionaire, and La Migra—while another costumed character, the Objective Press, commenting on the match, denigrated Superbarrio and praised his opponents at every turn. When the police swooped in and started arresting demonstrators, Superbarrio had to make a quick costume change. Having returned to Clark Kent status, he disappeared into the crowd.