Rossini’s “lost opera,” Aureliano in Palmira is making a comeback with a new production. The opera’s history involves antiquity, archeology, and Bugs Bunny. 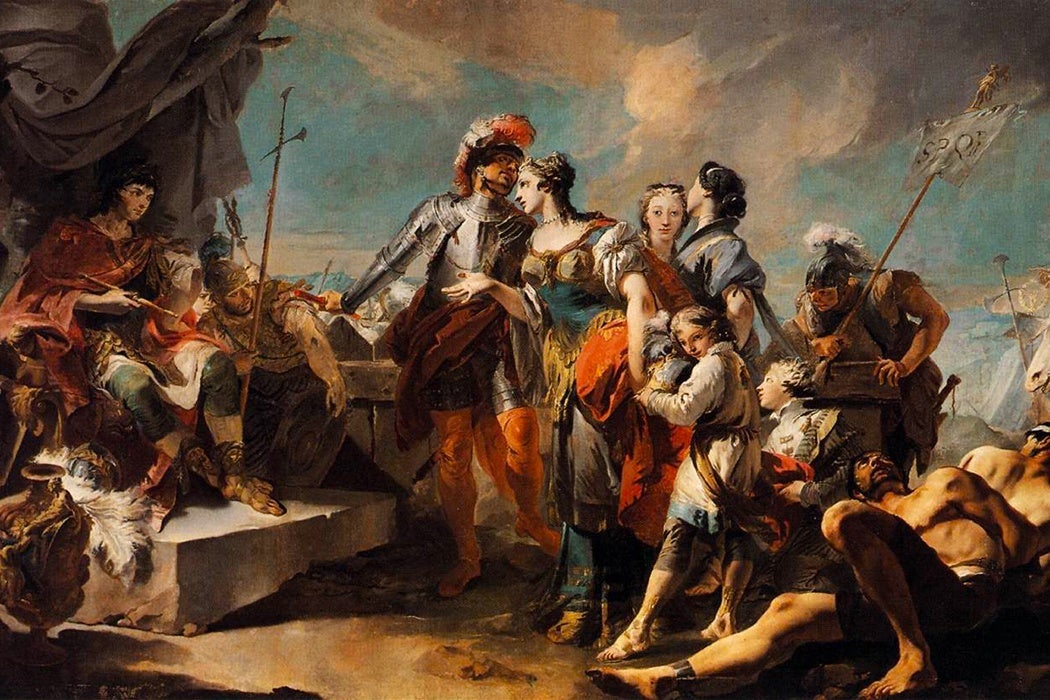 On July 16, 2016, conductor Will Crutchfield will take up his baton to conduct the American premiere of Gioachino Antonio Rossini’s Aureliano in Palmira at Caramoor. With a wave of his hand, he will bring a long journey full circle. The opera, which tells the story of Roman emperor Aurelian’s 272 A.D. campaign against Queen Zenobia of Palmyra, has had a fascinating journey—from highly anticipated star vehicle to underwhelming opening night to obscurity to recent rediscovery as one of Rossini’s most beautiful works.

Palmyra, a trading village in what is now central Syria, has had a similarly dramatic history. Starting in the first century B.C.E., the village grew precipitously as a result of an explosion in Roman demand for Eastern goods. Although Palmyra had a complicated history of political and commercial affiliations with its neighbors, it always retained an affinity with Mesopotamia: Historian Henri Seyrig points out that, although the town’s names have Aramaic and Arabic roots, the foreign gods represented in the Temple of Bel at Palmyra are Babylonian. Or were. As part of its anti-idolatry campaign in August 2015, ISIS destroyed the 2,000-year-old temple.

In the third century A.D., Palmyra functioned autonomously as part of the Roman province of Syria. During the Roman third-century crisis, however, the city’s Queen Zenobia rebelled agains the Romans, forming the Palmyrene Empire. Aurelian’s campaign to retake the province led him into battle against the Queen—and the impressive Palmyrene cavalry. There is some debate whether Zenobia was captured on the field of battle or retreated inside the city walls, where she prepared for siege. But scholars agree that, in 273, Aurelian destroyed the city of Palmyra.

The archaeological and historical record bears no indication that Aurelian ever offered his love to the defeated queen. Yet this emotional drama is at the heart of the Rossini opera’s second act. Based on a libretto by Gaetano Sertor, Aureliano in Palmira concerns a love triangle between Aureliano, Zenobia, and her lover, Prince Arsace of Persia. Rossini’s opera explores the theme of a defeated culture coming to terms with loss, of choosing love over war.

Aureliano in Palmira was deeply romantic material—very mature stuff for a young composer known for opera buffa, comic fare. By the age of 21, Rossini had become an international star, following the February 1913 premiere of his opera Tancredi, in Venice. According to musicologist Edgar Istel, one short cavatina from the opera, written while Rossini was preparing rice, made him Italy’s musical hero. In his old age, according to Istel, Rossini confessed that he believed this cavatina would be the only work of his that would survive.

A few months after Tancredi, Rossini premiered The Italian Girl in Algiers, also to notable success. Given the circumstances, Aureliano might have reached similar heights. The opera was Rossini’s second commission from La Scala—it premiered there December 26, 1813—and it had an all-star cast. However, things didn’t go well in the days leading to the opera’s opening night. The tenor playing Aureliano, Giovanni David, fell ill and dropped out of the performance. Finding a replacement on short notice meant reworking the opera. Rossini, ever the craftsman, duly rearranged the work for a new tenor. But some of the music had to be cut. The show went on, but critics and audiences were not enthusiastic.

The “final” version of a Rossini opera is not necessarily the version he intended.

To play Arsace, Rossini had secured the last of the great castrati, Giovanni Battista Velluti, a temperamental star known for his “childlike” personality. After the premiere, Velluti would choose not to sing any of the material Rossini wrote for him in Aureliano, and some have argued that this decision went a long way toward ensuring the opera’s obscurity.

Aureliano was performed in approximately 80 theaters, mostly regional theaters in southern Italy. This was a relative failure, both by Rossini’s standards and those for an opera at that time. But Rossini knew he had winning material, and so he set about reworking it.

Opera in Rossini’s day was more fluid than it is today, and most performances of an Italian opera involved musical or textual revision. Consideration of the vocal limitations or strengths of singers, the size of stages, and the whims of impresarios, among other things, influenced these changes. Although Rossini himself would revise The Italian Girl, for instance, three times during its first three years, adding a new aria with each revision. In many instances, however, his operas were changed without his knowledge (he did not receive royalties).

This fluidity, however, also meant that the composer could plagiarize himself. According to Istel, Rossini thought it a pity to waste what he considered quality material in Aureliano. Most notably, he took the overture and reworked it for his 1815 opera, Elizabeth, Queen of England. In 1816,  Rossini took the overture and used it again, this time for the Barber of Seville, which would become his greatest triumph. Some scholars have even suggested that the success of the Barber of Seville might explain Rossini’s abandonment of Aureliano: Perhaps he considered the work off-limits given its overture’s rebirth three years after the opera’s shaky premiere at La Scala.

This textual fluidity also means that the “final” version of a Rossini opera is not necessarily the version he intended. Aureliano in Palmira is one of only three Rossini operas whose original manuscript has not survived. The Rossini Foundation, along with Rossini’s original publisher, Casa Ricordi, has been publishing the definitive editions of Rossini’s operas. To rediscover the original version, or the closest they could come to it, Casa Ricordi turned to Crutchfield. By painstakingly comparing handwritten scores—and the mistakes that crept into them over time—as well as word books, Crutchfield was able to find an additional 30 minutes of music that had “disappeared” from Aureliano in Palmira at its last performance, in 1980. According to Crutchfield, this music is some of the opera’s best.

Rossini’s gift for melody is apparent from the start of Aureliano. Its overture displays the archetypal Rossini format: There is a slow introductory section, followed by a quick-tempo main section. Within that main section, Rossini introduces, modulates, and then recapitulates the theme. According to musicologist Philip Gossett, the slow introductory section typically consists of three parts within which there is a contrasting dynamic structure. This structure serves a theatrical and practical purpose: Loud passages get the audience’s attention and quieter ones make them listen more closely. A good overture should prepare the audience for the music to come.

Rossini wrote a total of 39 operas, as well as chamber music, sacred music, songs, and solo instrumental pieces. But he retired from writing opera after William Tell (1829). He was 38 years old.

Many of Rossini’s operas fell into obscurity in the late 1830s. In this regard, Aureliano in Palmira is not unique. The artistic philosophy of Richard Wagner came to dominate European opera in the mid-19th century. Rossini had little regard for Wagnerian ideals, and his work fell out of favor. The Barber of Seville was the only one of his works still in demand as Rossini retreated into semi-retirement. Wagner overshadowed the memory of Rossini’s work, too, and Rossini’s importance to music history was underestimated for years. Indeed, his oeuvre was only rediscovered by music scholars in the 20th century. The Barber of Seville remains Rossini’s most famous opera, and its overture is a cultural icon, recognizable to contemporary audiences for its use in the classic 1950 Looney Tunes short, “The Rabbit of Seville” (and numerous commercial placements). That this upbeat overture originated with the much more somber and romantic Aureliano in Palmira is, to say the least, an interesting twist on music history.