Police Versus the Chicano Moratorium March of 1970

Despite police violence against Chicano demonstrators in Los Angeles, the movement was not deterred. 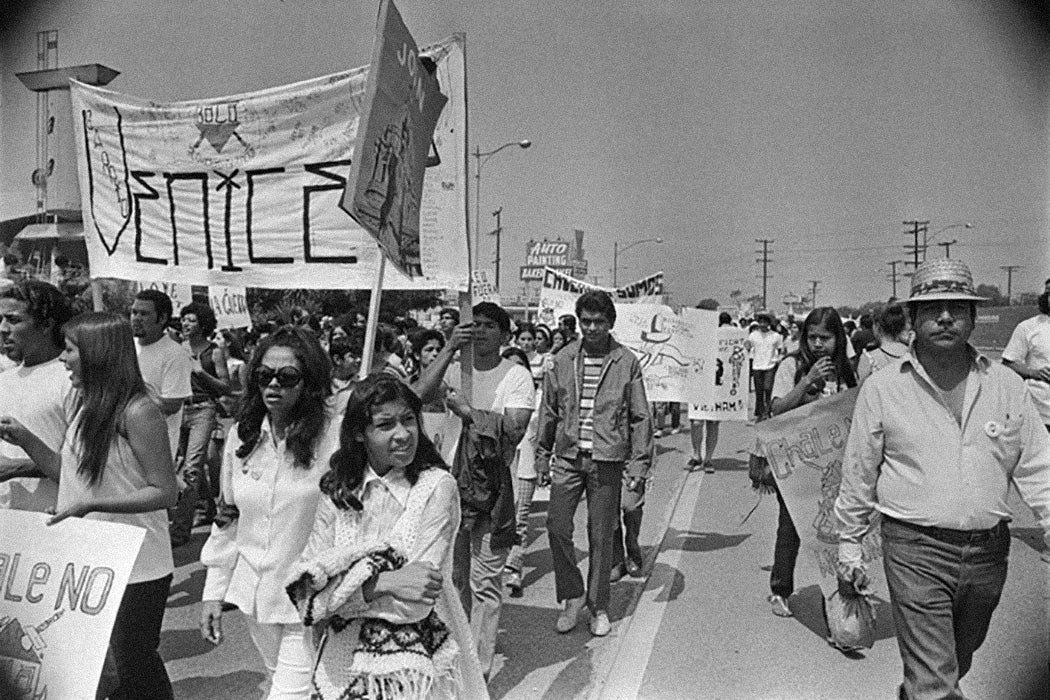 “Chicano” was a “previously pejorative term adopted by young Mexican Americans to establish and define their own identity,” explains historian Edward J. Escobar. Among many events that politicized the community was the Chicano Moratorium march of August 29, 1970.

Beginning in East Los Angeles, the march ended with planned speeches, picnic food, and music in a park. The Moratorium had been called to protest the disproportionately high number of casualties among Mexican-American soldiers serving in Vietnam. At twenty to thirty thousand strong, the crowd was the “largest demonstration [to date] ever mounted by people of Mexican descent living in the United States,” according to Escobar.

The Sixties were as much about about police repression as they were about protest.

But then the Los Angeles Country Sheriff’s Department, “responding to a minor disturbance a block away,” declared the demonstration unlawful. The police charged with tear gas and nightsticks before the crowd could disperse. Three people were killed, including influential journalist Rubén Salazar, who was shot through the head with a tear gas projectile. Even some conservative Mexican-American organizations called Salazar’s killing murder.

Escobar notes that the Sixties were as much about about police repression as they were about protest. Counterintelligence programs (COINTELPRO, in FBI-speak), which originally coordinated police at the local, state, and federal levels to suppress the Civil Rights and Black Power movements, were also unleashed on Chicano dissenters. The police used harassment, legal action, violence, spies, agents provocateurs, and traditional red-baiting to undermine and destroy the perceived threat of Chicanismo.

Police got what Escobar calls “mixed results.” Chicano groups, organizing around Vietnam, farm workers, land tenure, education reform, political representation, and police brutality, were undermined by the weight of police repression. For instance, Salazar, their most prominent gateway into mainstream media (he had had a Los Angeles Times column and was a radio producer), was silenced. But, in what Escobar calls the “dialectic of repression,” police efforts themselves became a rallying cry for Chicano organizers. Attempts to take down the movement increased grassroots support for it. State intimidation and violence backfired.

“The conflict between the LAPD and the Chicano movement helped to politicize Mexican Americans by making clear their subordination, giving them an increased sense of ethnic identity, and arousing a greater determination to act collectively to overcome that subordination,” Escobar writes.

In 1967, LAPD Chief Thomas Reddin had argued that massive force—“kill the butterfly with a sledgehammer,” he said—had to be deployed against demonstrations. Reddin was specifically talking about “the present Negro movement,” but tactics like intelligence gathering, psychological warfare, and criminal activities (ranging from law-breaking by “agents provocateurs to political assassination”) were aimed at Chicanos as well.

Even before the attack on the Moratorium demonstrators, these included brutal beatings; an undercover police officer trying to burn down the Biltmore Hotel and blame the Chicano Brown Berets; and the listing of UCLA’s Educational Opportunities Program as a subversive organization. Through it all, “police repression not only invigorated the Chicano movement but also helped to politicize and empower the Mexican-American community.”

The Dialectics of Repression: The Los Angeles Police Department and the Chicano Movement, 1968-1971
By: Edward J. Escobar
The Journal of American History, Vol. 79, No. 4 (Mar., 1993), pp. 1483-1514
Oxford University Press on behalf of Organization of American Historians