Plant of the Month: The Sensitive Plant

This plant’s animal-like behavior and alleged love-provoking abilities have sparked the imagination of everyone from early modern yogis to today’s scientists. 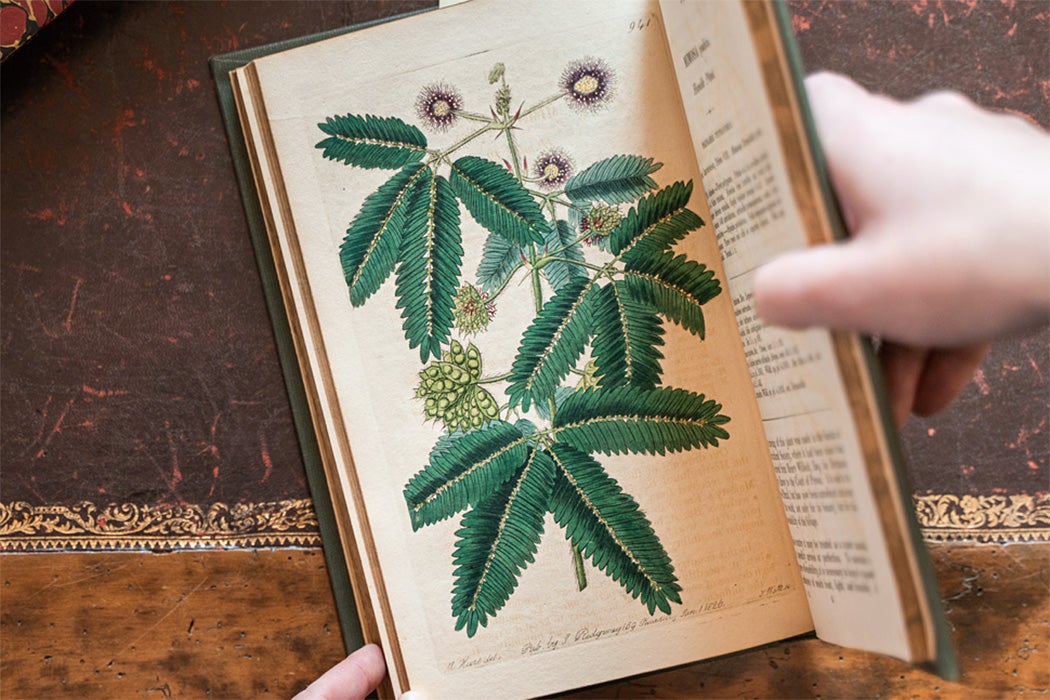 At first glance, Mimosa pudica is a plant that most people would consider a weed. It grows close to the ground, with countless delicate leaflets, puffy pinkish balls of flowers, and small bunches of legumes. So it makes sense that Mimosa pudica would be known as the “Humble Plant,” but what about its association with other names, like “Herb of Love” and “Sensitive Plant”?

According to Cristóbal Acosta, a sixteenth-century Portuguese physician and naturalist based in India, “Yerva del Amor” (Herb of Love) earned its name from local yogis, most likely for its presumed carnal powers. In his description, he recalls his encounter with a well-educated Indian doctor who, swearing on his own life, claimed the plant could lure any woman to bed. Acosta reassured his readers of his own honorable character, claiming to have never tested the herb.

As taxonomy developed, later naturalists pondered how to classify the Herb of Love. An 1825 volume of The Botanical Register, which features exotic plants cultivated in British gardens, suggests that the Herb of Love could be a plant known as Mimosa pudica, also called the “Humble Plant.” According to the botanist John Lindley, one of the authors of the volume now held in the Dumbarton Oaks rare book collection, the Humble Plant had been introduced from its native Brazil to “every part of the world,” not only for its beauty but for its curious “sensibility.” Yet, as is often the case in botany, there was confusion over identification: was this the same alluring herb that Acosta had described three centuries earlier?

In response to certain stimuli, the many small leaflets and leaves of Mimosa pudica and Biophytum sensitivum rapidly fold in on each other.

Despite publications associating the Humble Plant with the Herb of Love, modern scientific research suggests they are not even in the same family. Acosta’s Yerva del Amor was not Mimosa pudica, but likely an Old World plant with similarly structured leaves called Biophytum sensitivum. Perhaps the erotic claims Acosta made so enthralled some that they failed to turn the page to the next entry on “Yerva Mimosa”—a likely description of the actual Mimosa pudica! This latter entry serves as evidence that Mimosa pudica had already made it to the Asian continent by the sixteenth century, no doubt adding to the confusion.

But why did such confusion persist for centuries? The answer lies in that curious “sensibility” described by Lindley in The Botanical Register, which both Mimosa pudica and Biophytum sensitivum share. It was a trait that would challenge fundamental ideas extending as far back as the writings of Aristotle: both plants can feel.

In response to certain stimuli, the many small leaflets and leaves of Mimosa pudica and Biophytum sensitivum rapidly fold in on each other. It is this ability to actively respond to touch that has piqued the interest of physicians, physiologists, and naturalists from the 1500s onward, contradicting the generally accepted dichotomy that plants have a passive nature, while animals possess the capacity for direct action in response to external stimuli.

For instance, in The Botanical Register of 1825, Lindley describes a study by a distinguished French physiologist who investigated the animal-like nature of the Humble Plant. Researchers now believe this ability to react to touch is a defense against herbivores. The leafy part of the plant folds away from the hungry mouth of its predators, while exposing sharp thorns lining its stems. Because such an active means of balancing risk with reward is usually seen in animals, the behavior of Mimosa pudica has even received attention from behavioral scientists.

A recent study by Sabrina Amador-Vargas and colleagues proves that the plant, now aptly known as the Sensitive Plant, can actually learn, altering its behavior based on its personal life experiences. In their study, the more a stimulus struck the leaves of Mimosa pudica, the less the plant reacted, indicated by only partially folding its leaves or reopening them faster, and sometimes both. The plant recognized that it was not exposed to a true threat, the authors argue, so it chose not to waste more energy than necessary on the defensive action. To ensure the modifications in its behavior were not due to exhaustion after being continuously prodded, the researchers introduced a new stimulus just after the repeated trials—and the leaves increased their response to the unknown threat. Ultimately, the authors conclude that Mimosa pudica shows flexible and habituated behavior usually only observed in animals.

The Sensitive Plant has long inspired scientists across the globe to investigate its properties. They have discovered its broad range of uses and functions, from hosting symbionts with impressive nitrogen-fixing properties to containing compounds useful as an antivenom. The plant even recently inspired the invention of a new material with potential for use in self-powered devices, fog harvesting, and even artificial muscles.

Plants have their own kind of agency, as the story of Mimosa pudica makes clear. They move, curling up to avoid threats and learning which actions best serve them. They also move across oceans and continents, transported by humans inspired by their curious behavior and extraordinary properties.

Plants are agents in an ever-changing and complex world, as the interdisciplinary Plant Humanities Initiative explores through case studies like Mimosa pudica. As humans with unprecedented knowledge of these global dynamics and complexities, we owe it to plants to consider their role in our shared natural and cultural systems.