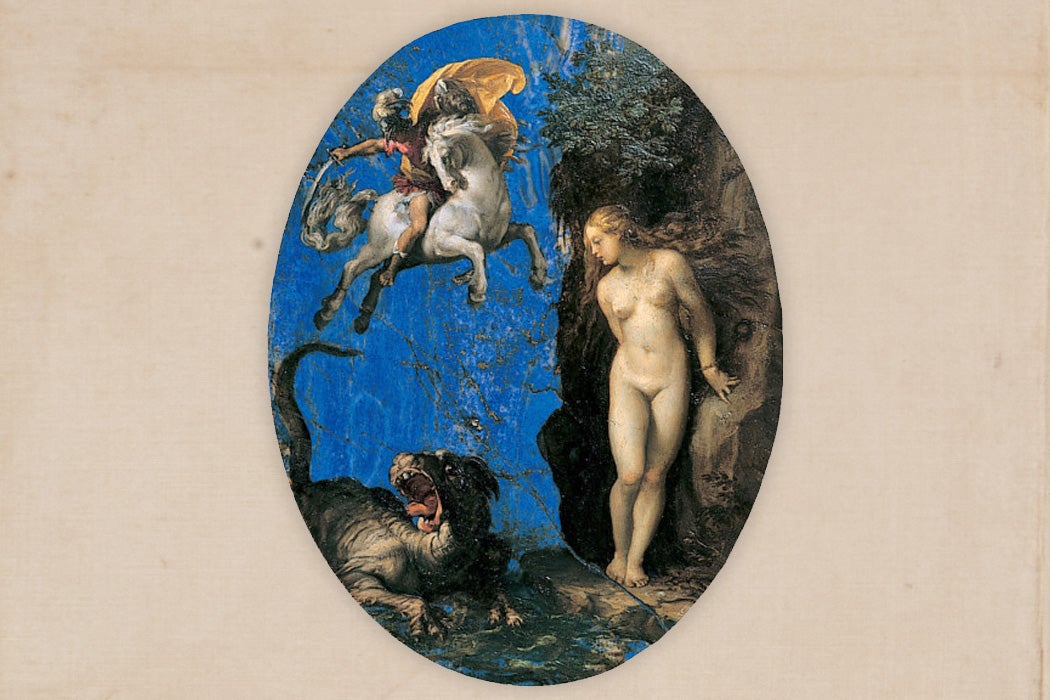 There’s something odd about the sky in Giuseppe Cesari’s rendition of Perseus and Andromeda. The blue is too bright, too saturated; it has a hyperreal quality that feels appropriate for a myth. This luminous sky and its fuzzy wisps of cloud were not picked out by an artist’s brush, but rather, formed by geological forces. The painting is worked on a chunk of polished lapis lazuli. It’s a visual pun: in the myth, Andromeda was chained to a rock, just as her image is secured to a stone in this painting.

Cesari returned to this story over and over, producing versions on wood panels, on limestone, and on slate. Each substrate contributes to the painting in its own way: wood gives the scene an underlying warmth; slate lends the image a dark, silky luminosity; unpainted limestone becomes the rugged rock to which Andromeda is chained. But none match the lapis for its dreamy, jewel-like brilliance.

If Cesari hadn’t made his sky from solid stone, he would’ve made it from powdered minerals.

Limestone, slate, lapis lazuli: does the list surprise you? In fact, Cesari’s range of substrates wasn’t particularly unusual for his time. Nor was his decision to leave part of the stone peeping through. As art historian Christopher J. Nygren notes in “Titian’s “Ecce Homo” on Slate: Stone, Oil, and the Transubstantiation of Painting,” one way Renaissance artists thought about painting was as “an epiphenomenon of stone.” Pigments were made from pulverized minerals, and they were ground on a rock. If Cesari hadn’t made his sky from solid stone, he would’ve made it from powdered minerals.

Sebastiano del Piombo has often been credited as the inventor of the technique for painting on stone. A letter from the time recounted how he found a way to unite paint with stone, producing images that were “a little less than eternal.” In the aftermath of the 1527 Sack of Rome, the idea of a preternaturally durable painting had a powerful appeal.

But stone had important aesthetic qualities, too. At first, artists confined themselves mostly to slabs of slate. Its smooth, oily blackness allowed them to play with dramatic contrasts of light and shadow, taking chiaroscuro to its ultimate heights. Witness the lightless velvet void that surrounds the figures in a slate painting of the Virgin and Child by Alessandro Turchi. Slate had a metaphorical resonance as well: It resembled the touchstones used for assessing the authenticity of precious metals. Rubbed against a touchstone, real gold could be distinguished from false by the streak it left behind. In the same way, an artist’s skill gleamed on the black stone like true gold.

The style changed dramatically as artists began to work with more colorful stones. In the early 1600s, renovations on churches in Rome meant an overflowing supply of semi-precious stones. Artists found (perhaps questionable) means of getting their hands on bits and pieces, and so began the flowering of a new style. They didn’t want to conceal their precious substrates under layers of paint, and the colors and patterns invited them to devise playful ways of incorporating the backgrounds into the image. Swirls of marbling began to serve as clouds or as landscapes; veins in the stone, dressed with leaves, became trees.

As this style developed, the patterns in the stone began to lead the artist’s conceptualization of the image. Consider Paolo Piazza’s Annunciation, where the alabaster’s swirls become a whirling cloud heralding Gabriel’s arrival, seraphic heads peeping out between the layers of haze. Then there’s Antonio Tempesta’s rendition of the Egyptians Drowning in the Red Sea, in which the marble’s frilly convolutions become violent waves, swallowing up horses and soldiers.

There was even a variety of stone named for its utility in these playful paintings: pietra paesina, or landscape stone. This limestone, quarried in the Florentine countryside, was marked by smooth, undulating lines, hinting at rolling hills or waves that invited the artist to fill them in with charming pastorals and seascapes. Even more prized was the stone known as “ruin marble.” In this rare variation of pietra paesina, tectonic forces have broken up the smooth lines into jagged spires and towers that suggest the silhouette of a ruined city.

Behind all this lies a Renaissance trope: what art historians call “the image made by chance.” These paintings would fit right into a cabinet of curiosities, where wonders of art and nature intermingled, and guests could play at distinguishing the hand of the artist from the speckling of the stone. As late as 1778, a pebble that, when split, revealed “a striking Likeness of the Head of Chaucer” was given a place of pride in the British Museum. This doesn’t seem worth much more than a mild chuckle, but at the time such oddities were considered to reveal something about the creative and playful spirit of Nature.

We can see this fascination in the work of Renaissance polymath Athanasius Kircher, who found time between his many other exploits (like exploring the crater of Vesuvius and designing a “cat piano”) to obsess over stones that seemed to show faces of owls and ladies and devise experiments for imbuing marble with images. Kircher wrote of Natura Pictrex, Nature the Painter, who amused herself by hiding images of kings and poets in subterranean rocks. More importantly, God revealed himself by converting the swirls of marble into the likenesses of Jesus, Mary, and the Saints. The stones beneath our feet are like books, waiting to be cracked open and read. 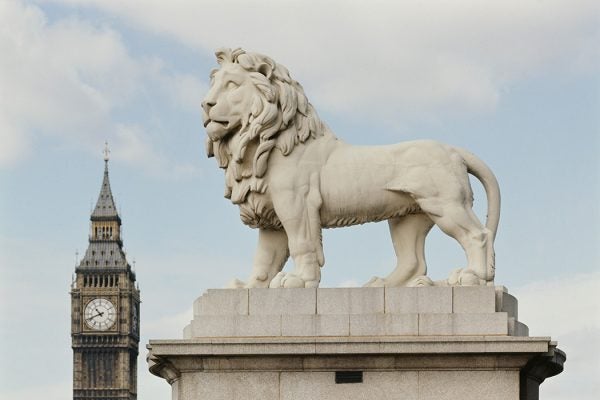 Fake Stone and the Georgian Ladies Who Made It

Coade stone was all the rage in late eighteenth-century architecture, and a mother-and-daughter team was behind it all.