Our Long-Running Love Affair with Pigeons

Through crazes of pigeon-fancying, these birds have been reshaped into a dizzying variety of forms. 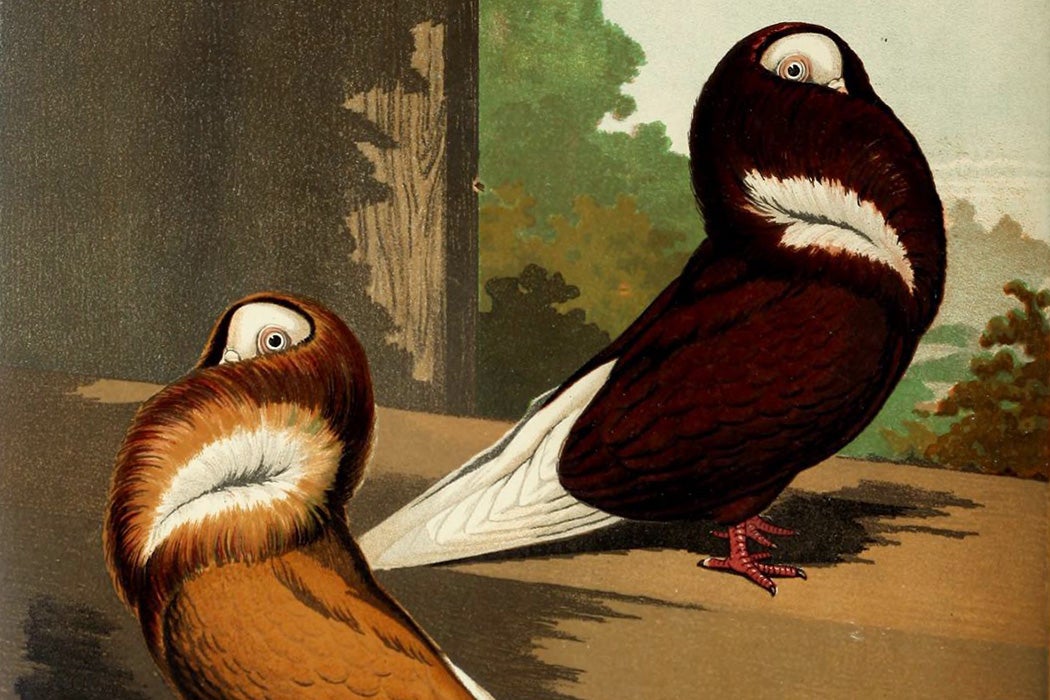 The strangest bird I’ve ever seen is called the Bokhara Trumpeter. Such a mass of feathers crowns its head that it looks disturbingly faceless, like a living tassel. Long plumes jut out from its ankles, like a second pair of wings. But for all its gaudiness, the Bokhara Trumpeter is, in fact, just a specialized breed of pigeon. It’s a frou-frou version of the same bird you might see choking down an entire Pop-Tart on the streets of any major city.

The Bokhara Trumpeter is one end-point of humanity’s long entanglement with pigeons, a relationship that began when the birds were first domesticated at least five thousand years ago. Since that time, pigeons have carried love-letters and military dispatches, assisted fortune-tellers, and inspired cutthroat bird-racing subcultures.

For centuries in Europe, pigeons were so prized that noblemen held exclusive rights to construct dovecotes on their properties.

They have been reshaped, through the combination of genetic chance and human taste, into a dizzying variety of forms: slender, crane-like scanderoons; peacock-shaped fantails; hooded jacobins; frill-backs, who look like the victims of a bad perm; and top-heavy pouters, whose chests are swollen with air, like wobbly balloons. Then there are the laughers, bred for their chuckle-like song; tumblers that flip end-over-end in the mid-flight like falling leaves; and parlour rollers, which don’t fly, but rather somersault along the ground. There are even thief pigeons, bred to be so irresistibly alluring to other members of their species that they could convince your neighbor’s prize birds to roost in your coop.

For centuries in Europe, pigeons were so prized that noblemen held exclusive rights to construct dovecotes on their properties. The birds that they housed in these ornate, crenellated towers would swoop over the surrounding countryside, feasting on the grains planted by local peasants. The fine dishes of roast squab served up on the nobleman’s table were fattened on the pillaged stores of the poor. It’s difficult to imagine a more fitting metaphor for the parasitic relationship between the aristocracy and the commons.

This was not lost on the peasants. In France, pigeon-related tensions came to a head in the summer of 1789, in the sweep of the Revolution; peasants around the countryside marched into their lords’ houses, demanding wine and cheese—and the heads of the lord’s prized pigeons.

The link between nobles and pigeons began to break down as the eighteenth century gave way to the nineteenth. The Victorian era in England was the golden age of pigeon-fancying, along with other nature manias, like aquarium-keeping, fern-collecting, and taxidermy. Victorians were mad for pets, from the mice kept by the very poorest, to the exotic pets— koalas, badgers, bears, monkeys—favored by the rich.

Pigeons fit the bill: they were cheap, easy to raise, and came in seemingly limitless varieties. Although there were attempts to protect the prestige of pigeon-breeding, such as the establishment of exclusive, invitation-only pigeon-fanciers’ clubs, the birds quickly became associated with the working class. So it was that, when Charles Darwin took up pigeon-breeding, he wrote, with more than a hint of disdain: “I am hand & glove with all sorts of Fanciers, Spital-field weavers & odd specimens of the Human species, who fancy Pigeons.”

With the help of hundreds of years of literature on pigeon-breeding, Darwin was able to demonstrate how new lineages of pigeon had arisen, and how existing ones continued to develop in accordance with the whims of the fancier’s eye. They became a centerpiece of his Variation of Animals and Plants under Domestication. With their incredible variety, well-documented lineages, and demonstrable link to a common ancestor, pigeons provided a perfect illustration of the principles of descent with modification.

The pigeons that flock in our cities today are largely physically indistinguishable from the rock dove that Darwin placed at the starting point of the pigeon’s family tree. Like the cliff-dwelling rock doves they are derived from, they make their homes in the nooks and crannies of our concrete built environment. But they are feral, not wild, the descendants of escaped squabs and abandoned pets. And if you happen to spot an oddity in the crowd—one decked out in pink and gold or black and white—chances are it’s the great-great-great-grandchild of someone’s prized fancy hen. 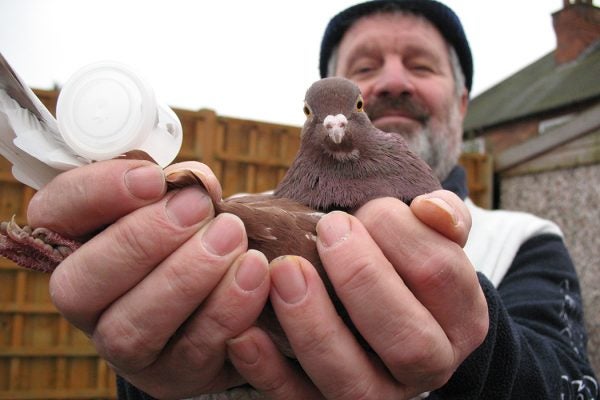 Composition with pigeons. One flock's dynamic movement created a spatial music that was constantly crescendoing and dissipating in a long haunting chord.