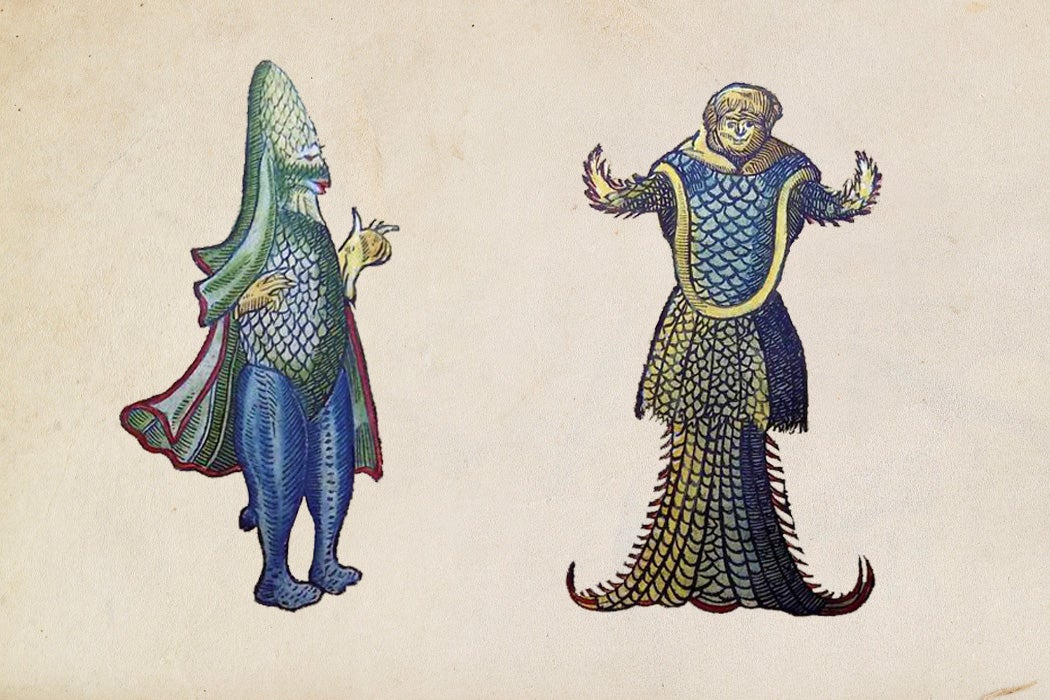 Behold the sea-bishop. Its scaly head rises to a point, like a mitre. A fleshy, tentacle-like beard adorns its face. According to the fifteenth-century naturalist Guillaume Rondelet, the creature was fished out of the sea near Poland. “Carried to the king of that country,” he writes, “it made certain signs that it had a great desire to return to the sea. Being taken thither it threw itself instantly into the water.”

In the pages of Rondelet’s 1554 Libri de Piscibus Marinis, the sea-bishop joined the ranks of other marine wonders, like the sea-monk, with its tentacle arms, tonsured head, and scaly skin that hangs loosely like a monk’s habit. Likely the creature, if it existed, was some kind of squid or shark, onto whose features contemporary viewers projected the monk’s face and habit. But why a monk? Strange as it seems, there’s a reason people found friars in fish.

It was an era rich in prodigies—monsters, fires in the sky—all swirling around the conflict between the Catholic Church and the growing Protestant movement. In this context, the sea-bishop was ripe for satire. As the Protestant Johan Fischart wrote:

In the sea they’ve chanced to find
Sea-wonders of a Roman kind:
Sea-bishops, sea-monks, and sea-priests
Mass grottoes, pilgrim apes, all which
Bear a strong resemblance to
The Romish ecclesiastical crew.
For Scripture calls the sea a world
From which huge monsters are up-hurled,
But no greater ones are bred
Than the so-called Church’s heads,
Who in the sea of the world do roar,
And bring forth sea-devils galore…

Fischart’s words are more than mockery. In the 1500s, the interpretation of prodigies was common practice. Earthquakes, shooting stars, anomalous births—these were not chance occurrences, but omens. In fact, the very word “monster” shares a root with the word “demonstrate.” It seems that, on some level, what defined a monster was not its fearsomeness or oddity, but its status as a “visible sermon,” an embodied symbol of God’s will.

In 1523, Martin Luther performed his own exegesis of one of these living sermons: a monk-calf with a fleshy ruff shaped like a cowl around its neck. “Be not offended,” Luther wrote, “that God has clothed a calf with a clerical garb, a holy cassock: through this he signified many things with one figure, namely that it must become manifest that all the monks and nuns are nothing but false, deceitful phantoms and secular hypocrites.”

The interpretation of prodigies was only one small part of a larger worldview, which held that the nature of reality is essentially metaphorical, each creature playing a symbolic role in a web of meanings pointing towards God’s ultimate truth. Bestiaries, for instance, didn’t only describe animal appearances, but also provided guidance for how to interpret creatures allegorically. As Edward Topsell wrote in the preface to his History of the Four-footed Beasts and Serpents:

[T]his sheweth that Chronicle which was made by God himselfe, every living beast being a word, every kind being a sentence, and al of them together a large history, containing admirable knowledge & learning.

Or as James Pilkington, the Bishop of Durham, wrote, “all the creatures of God are my bokes, & I read & learne his maiesty out of his creatures.”

In the case of prodigies, however, the “reading” becomes quite explicit. Witness the interpretation of the so-called “Monster of Ravenna,” supposedly the grotesque offspring of a nun and a monk:

The horn (indicates) pride, the wings, mental frivolity and inconstancy; the lack of arms, a lack of good works; the raptors’s foot, rapaciousness, usury and every sort of avarice; the eye on the knee, a mental orientation solely towards earthly things…

Colorful tales of prodigies are generously peppered through the pamphlets of the early modern era. In 1615, a bunch of grapes sprouted a long, red beard, which was interpreted as a caution from God against overindulging in wine. In 1626, a fishwife sliced open a cod in Cambridge market, revealing a Protestant tract secreted in its guts. The event was interpreted as a kind of latter-day, miniaturized version of the tale of Jonah, and the manuscript was published the next year under the title “Vox Piscis,” or “Voice of the Fish.” There was even a wave of frivolous “fashion monsters,” interpreted as holy critiques of new-fangled trends in clothing: calves born with ruffled collars, horses whose puffy, striped legs looked like stylish slashed doublets.

And yet, prodigies were opaque and flexible symbols; all they indicated was that something was wrong, that God was sending some message. They could easily be used by anyone to support any argument. The “monk-calf” Luther described was interpreted by Catholic polemicists as a representation of Luther’s swinish venality. The anomaly takes the shape its viewers impose upon it.

Share Tweet Email Print
Have a correction or comment about this article?
Please contact us.
fishMartin LutherJournal of the History of IdeasPreternature: Critical and Historical Studies on the PreternaturalThe English Historical ReviewThe Sixteenth Century Journal

Monstrous Births and Counter-Reformation Visual Polemics: Johann Nas and the 1569 Ecclesia Militans
By: Jennifer Spinks
The Sixteenth Century Journal, Vol. 40, No. 2 (Summer, 2009), pp. 335-363
Sixteenth Century Journal
The Cult of the Monstrous: Caricature, Physiognomy, and Monsters in Early Modern Italy
By: Sandra Cheng
Preternature: Critical and Historical Studies on the Preternatural, Vol. 1, No. 2 (2012), pp. 197-231
Penn State University Press
A World of Signs: Baroque Pansemioticism, the Polyhistor and the Early Modern Wunderkammer
By: Jan C. Westerhoff
Journal of the History of Ideas, Vol. 62, No. 4 (Oct., 2001), pp. 633-650
University of Pennsylvania Press
Vox Piscis: Or The Book-Fish: Providence and the Uses of the Reformation past in Caroline Cambridge
By: Alexandra Walsham
The English Historical Review, Vol. 114, No. 457 (Jun., 1999), pp. 574-606
Oxford University Press
Review: [Untitled]
By: Review by: Lawrence P. Buck
The Sixteenth Century Journal, Vol. 38, No. 1 (Spring, 2007), pp. 215-218
Sixteenth Century Journal

Ancient Monks Got That Quarantine Feeling, Too

Listlessness, boredom, torpor, that "noonday demon" that tempts you away from spiritual connections—that's what was called acedia.