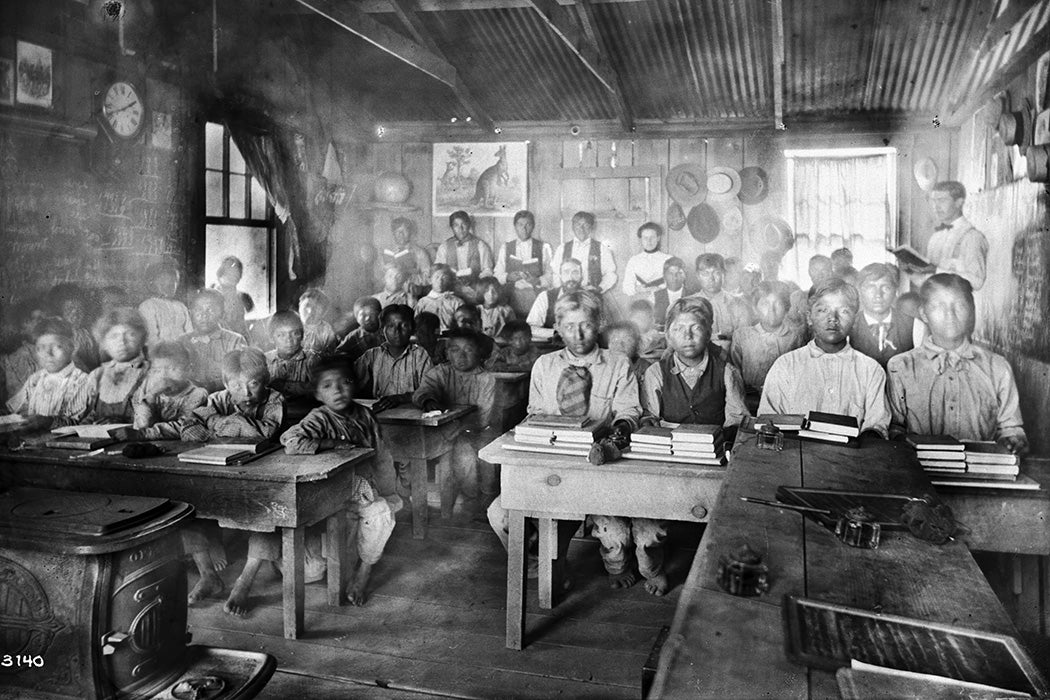 Classroom of students with their teachers inside a Walapai school at Hackbury, Arizona, circa 1900
via Wikimedia Commons
By: Livia Gershon
3 minutes
Share Tweet Email Print

Recently, US Secretary of the Interior Deb Haaland announced an investigation into federal boarding schools for Native Americans, where unknown numbers of Indigenous students were abused and died in the nineteenth and twentieth centuries. In 2004, the Journal of American Indian Education published a study exploring the boarding schools’ effects on those held there by a team of mental health professionals (Stephen Colmant, Lahoma Schultz, Rockey Robbins, Peter Ciali, Julie Dorton, and Yvette Rivera-Colmant).

The researchers spoke with thirty adult alumni of boarding schools in Oklahoma, California, and Kansas, as well as sixteen teenagers and seven staff living or working at a school in Oklahoma at the time of the study.

Many of the study participants weren’t the first in their families to be sent to boarding schools. “Nancy,” age forty-one, described how her grandfather refused to teach her about the family’s cultural traditions because of the way he’d been treated at a school. He’d had his mouth washed out with lye soap.

Many of the former students reported severe abuse and neglect at the schools.

While children in earlier generations were often forcibly removed from their homes and sent to the schools, many of the people Colmant and his colleagues interviewed said they’d ended up at the schools due to trouble at home. High levels of poverty and intergenerational trauma left some Native American families seeing the schools as the best option for their children.

Still, many of the former students reported severe abuse and neglect at the schools. “John” described the superintendent at the school he attended in the 1960s severely beating students. If a student moved while the man was counting out blows, he would start again at one.

“So the whippings I would say were pretty severe,” John said. “If you moved two or three times, let me tell you they were literally beating the s–t out of you. S–t ran down your leg after a while.”

All of the interviewees said they felt intensely lonely and homesick, and many said they had no consistent relationships with caring adults. Some described seeking out support from adults who included a cook and a night watchman, or from other students.

“I was only six and very scared,” one said. “An older student let me sleep with her. She looked after me.”

For many alumni, life in the residential schools affected their later experiences in life, including in marriage and parenting. Some described what the authors characterize as “posttraumatic growth,” finding ways to take something positive from a difficult experience. One woman, for example, explained that she tried to give her own children the experience of home she was denied.

“I wanted to be there for them, to have every moment to be involved in their life,” she said. “I don’t know, I just didn’t want them to go through what I did.”