Is There a Witch Bottle in Your House?

In the 16th-18th centuries, vessels filled with nails, thorns, hair, and other materials, were used as a form of ritual protection against witches. 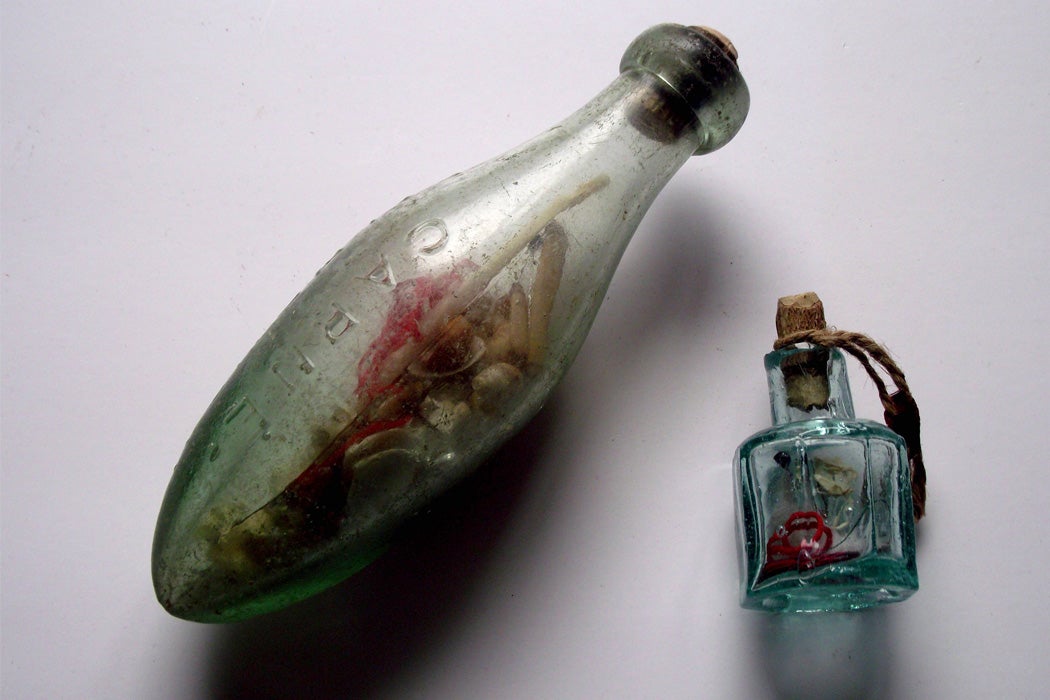 In 2008, a ceramic bottle packed with about fifty bent copper alloy pins, some rusty nails, and a bit of wood or bone was discovered during an archaeological investigation by the Museum of London Archaeology Service. Now known as the “Holywell witch-bottle,” the vessel, which dates between 1670 and 1710, is believed to be a form of ritual protection that was hidden beneath a house near Shoreditch High Street in London.

“The most common contents of a witch-bottle are bent pins and urine, although a range of other objects were also used,” writes archaeologist Eamonn P. Kelly in Archaeology Ireland. Sometimes the bottles were glass, but others were ceramic or had designs with human faces. A witch bottle might contain nail clippings, iron nails, hair, thorns, and other sharp materials, all selected to conjure a physical charm for protection. “It was thought that the bending of the pins ‘killed’ them in a ritual sense, which meant that they then existed in the ‘otherworld’ where the witch travelled. The urine attracted the witch into the bottle, where she became trapped on the sharp pins,” Kelly writes.

It’s probable many witch bottles were made as a remedy at a time when available medicine fell short.

Akin to witch marks, which were carved or burned onto windows, doors, fireplaces, and other entrances to homes in the sixteenth to eighteenth centuries, witch bottles were embedded in buildings across the British Isles and later the United States at these same entry points. “The victim would bury the bottle under or near the hearth of his house, and the heat of the hearth would animate the pins or iron nails and force the witch to break the link or suffer the consequences,” anthropologist Christopher C. Fennell explains in the International Journal of Historical Archaeology. “Placement near the hearth and chimney expressed associated beliefs that witches often gained access to homes through deviant paths such as the chimney stack.”

And much like witch marks, which tended to proliferate in times of political turmoil or bad harvest, the rather unpleasant ingredients in witch bottles reflected real threats to seventeenth-century people even as they were concocted for supernatural purposes. It’s probable many were made as a remedy at a time when available medicine fell short. “Urinary problems were common both in England and America during the seventeenth and eighteenth centuries, and it is reasonable to suppose that their symptoms often were attributed to the work of local witches,” scholar M.J. Becker notes in Archaeology. “The victims of bladder stones or other urinary ailments would have used a witch bottle to transfer the pains of the illness from themselves back to the witch.” In turn, if a person in the community then had a similar malady, or physical evidence of scratching, they might be accused of being the afflicting witch.

Like other counter-magical devices, the bottled spells eventually faded out of popular folk practice, but not before immigrants to North America brought over the practice. “The witch-bottle tradition originated in the East Anglia region of England in the late Middle Ages and was introduced to North America by colonial immigrants, the tradition continuing well into the 20th century on both sides of the Atlantic,” writes historian M. Chris Manning in Historical Archaeology. “While nearly 200 examples have been documented in Great Britain, less than a dozen are known in the United States.”

Researchers with the Museum of London Archaeology and the University of Hertfordshire are now hoping to identify more. In April of 2019, their “Bottles concealed and revealed” project launched as a three-year investigation of witch bottles that will bring disparate reports together into a comprehensive survey of all the known examples in museums and collections around England. Through this project, they aim to better understand how these curious bottles spread as a popular practice, and how they convey ideas around medicine and beliefs. Part of this exploration is a “Witch Bottle Hunt” calling on the public to share any discoveries with their specialists. While they don’t want anyone breaking down the walls of historic homes, they are asking that any finds be treated as archaeological objects and left in situ for a specialist to examine. Most importantly, they advise, leave the stopper in. Let the experts deal with these containers of centuries-old urine and nail clippings.