In the twentieth century, advertisements for a new type of garment for preteen girls sought to define the femininity they sold. 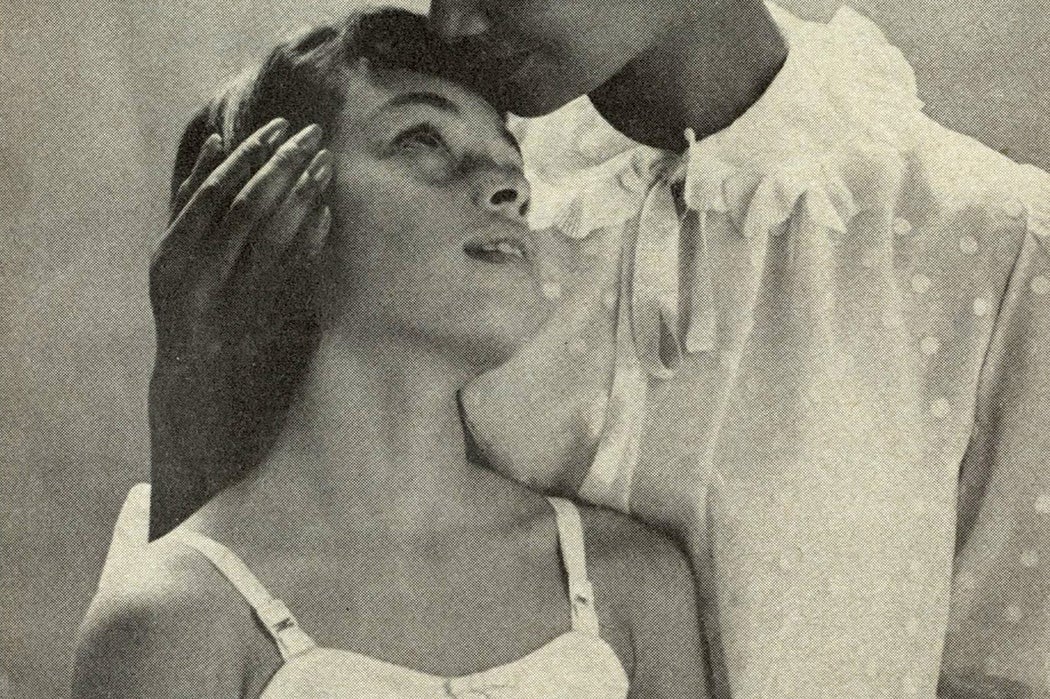 In the early twentieth century, it was still something of a novelty to encounter mass-produced undergarments at all—or clothing that was specific to children. Before then, middle-class children in Europe and North America essentially wore kid-sized versions of adult clothing. “From the seventeenth to the nineteenth century,” the museum curator Anaïs Biernat wrote in the 2015 collection Fashioning the Body, “like their parents, children’s bodies were constricted by a hidden frame consisting of whalebone stays or a corset that formed a rigid structure around the torso.”

According to the U.S. Patent and Trademark Office (USPTO), patents for softer, less restrictive alternatives to corsets were filed in the late nineteenth century and developed in the 1910s. The idea of separate undergarments for young girls developed in parallel. By the 1920s, a “junior” market for youth clothing was in full swing, as corset makers deliberately sought to turn young girls into lifelong consumers. According to the historian Jill Fields:

Manufacturers still maintained concerns that younger women in the 1920s might never wear corsets if they did not undergo the initiation into corset wearing that women had in previous generations. They looked closely at the circumstances of a young girl’s first corset fitting in order to find ways of luring young women to a corsetiere.

It wasn’t only corsets. Girdles and brassieres became part of the burgeoning youth market, with the Warner Brothers Corset Company selling a “Growing Girl” brassiere in 1917. The trend led a fashion buyer to report in the 1920s that “[s]mall sizes sell best—even the little girls wear brassieres now.”

In the 1930s, a knitted version, called a “mouldette,” aimed at 10- to 15-year-olds, was advertised in Corset and Underwear Review. And the 1930 patent application for the Malnick brassiere mentioned: “the provision of a brassiere that shall be especially suited… to afford the necessary support for insuring correct bust development of adolescent wearers.” Other physiology-based justifications for training bras persist, such as the idea that nipples on developing bodies are raw and need extra protection (or extra camouflage).

The 1930s also saw the rise of cup sizing and a transition away from the breast-flattening flapper styles of the 1920s. “Uplift” bras were sold to even “the tiniest, flattest youngsters,” as the junior market segmented into “debs” (17- to 19-year-olds) and “sub-debs” (13- to 16-year-olds).

The cultivation of an attractive, well-groomed self became a project everyone, including preteen girls, was urged to embark on.

By the 1950s, bustiness was big business. This period was a watershed moment for training bras, which tapped into post-war anxieties about appropriate femaleness. These worries were medicalized at the same time that they were culturally ingrained. The cultivation of an attractive, well-groomed self became a project everyone, including preteen girls, was urged to embark on. Undergarment sellers essentially transformed the collective pressures of wartime sacrifice into a kind of personal duty to be presentable—and appropriately gendered.

Some U.S. doctors claimed that starting girls early on bras would help to avoid sagging breast tissue later. This was considered important both for aesthetic reasons and to ensure seamless nursing after childbirth. The social historian Joan Jacobs Brumberg has argued, in her book The Body Project, that this view came from “doctors who valued maternity over all other female roles.” There was little opposition to this sexist idea.

The 50s were a heyday for brash, creative marketing. The Teenform company started flinging unsubtle ads for training bras into girls and women’s magazines, from Ebony to Good Housekeeping. These ads, featuring fresh-faced girls and kind-looking older women, made the purchase of a first bra seem like a crucial rite of passage. According to one wordy ad from 1958, an “understanding mother” will buy her daughter a training bra for psychological reasons:

Another such ad from 1961 concurs: “A between ager may still be “flat on top” but need the emotional reassurance of a bra.”

One 1960 ad in the UK magazine Girl struck a similar girlish-yet-grown-up chord: “See how the other girls envy your grown up look! You’ll be thrilled at how gorgeously ‘grown up’ you feel […] when you’re wearing a Teenform bra and suspender belt […] they’ve been designed specially for you.”

These ads reflected and perpetuated anxieties, in both mothers and daughters. Young girls were being trained to think of intimate consumer products as necessary tools for transitioning into adulthood. Their moms, meanwhile, were being persuaded to buy such products to prove that they were preparing their daughters sufficiently for womanhood. In both cases, they were perceived as incomplete if they didn’t follow certain consumer rituals.

The way the Girl ad attempted to speak directly to young girls reflected increasing financial means for some adolescent girls. The prevalence of babysitting made teen girls a viable demographic for marketers, and the boom in post-war consumption extended to these girls’ under-the-table money.

Department stores got in on the act as well. In the 1950s, department stores became aggressive about creating displays of different foundation garments (shaping undergarments). They recruited college-age women as trained undergarment fitters, and generally made younger girls more “foundation conscious.” This would later transition into attempts by shops like Victoria’s Secret to tout the purchase of a beginner bra as a key mother-daughter bonding experience.

Advertising pressure also reinforced and reflected peer pressure. Stephanie Spencer, author of Gender, Work and Education in Britain in the 1950s, told me via email that “there was the problem of communal changing for girls for sport in school where the status of having a bra added to kudos.”

Indeed, there are many accounts of adolescent feelings of inferiority due to being a late adopter of bras. As the narrator of a short story by Jennifer Haigh reflects: “I still wore what was known as a training bra, a garment designed for optimists. After three years I saw it for what it was: underwear for girls whose friends had breasts.”

“You didn’t really see much outright emphasis on preteens until the 1960s,” Jane Farrell-Beck, the co-author of Uplift: The Bra in America, said when we spoke on the phone. “They wouldn’t spell out, this is for 10- and 12-year-olds.”

Nor did manufacturers tend to use the words “training bra,” “beginner bra,” or “trainer bra” in their patents. Patents for such bras, however they were labelled, especially flourished in the 1960s. These became increasingly varied, including a number of versatile models intended to accommodate girls’ changing shapes. As with other forms of clothing intended for women and girls, bra patents have been a way for women inventors to develop intellectual property, a field that remains dominated by men. The USPTO estimates that more than 60 percent of patents for training bra-style garments over the years have included a named female inventor.

In short, advertising cues extended the target audience for bras, as did cup sizing that focused on the As—and, eventually, the AAs. And the advertising has become savvier along with the consumers.

The focus in recent decades has been on bringing “athleisure” wear to the now-ubiquitous “tween.” One bra launched in 2019 for 7- to 13-year-olds uses an ethos of empowerment and specifically mentions “girls’ active lifestyles.” Farrell-Beck believes that this sits within a larger trend for smoother, less bulky, and more athletic garments—especially for wealthier girls, today’s trend is more Lululemon than Victoria’s Secret. “They have become a type of underwear,” she says of yoga pants, leggings, sports bras, and the like. This fits within two overall trends, along the centuries: underclothing has become less cumbersome, and the sports activity of girls has become more encouraged.

Stores are also full of all-ages bralettes, or gentler versions of bras, which for decades have been marketed to young girls to initiate them into the years of uncomfortable underwires to come. Still, some of these garments retain the quasi-medical ethos of earlier decades. A 2004 patent application for a “protective elastic support top and breast shield” echoed the doctors’ advice of the 1950s:

The breast area of female includes very sensitive breast tissue. It is not desirable nor is healthy to have such sensitive tissue hit or damaged. In fact, there has been some research that has shown that damage to the breast area may result in a future cancer site. Therefore, it has become even more imperative to protect the breast area of women of all ages, including young girls.

Among middle class consumers, there has been a marked shift away from overt sex appeal, as the first few generations to grow up in training bras have now become entrepreneurs reflecting on the awkwardness of their own early experiences. For some companies targeting young girls, pretty is the new sexy.

Although many European women, for instance, consider the training bra an American peculiarity, versions exist elsewhere. In the UK, the discount chain Matalan sells a “Girls Unicorn Print Moulded First Bra (28AA-34A)” along with other “first bras.” The term “training bra” might bring to mind a sports bra, rather than a preteen bra, for those who refer to exercise as “training.” Concerned observers in Australia have reported spotting padded bras for 8- to 10-year-olds, as well as Bratz bras for 3- to 4-year-olds.

The transition to womanhood, as navigated with the help of garments, is clearly fraught. As the essayist Kristina Emick suggested in Fourth Genre, the training offered by a training bra is less about chests—and more about how to discipline bodies and train young consumers. As girls became less patient with uncomfortable garments, it’s unclear where the training bra will go. But history suggests that clothing manufacturers, designers, and retailers won’t give up on it easily.