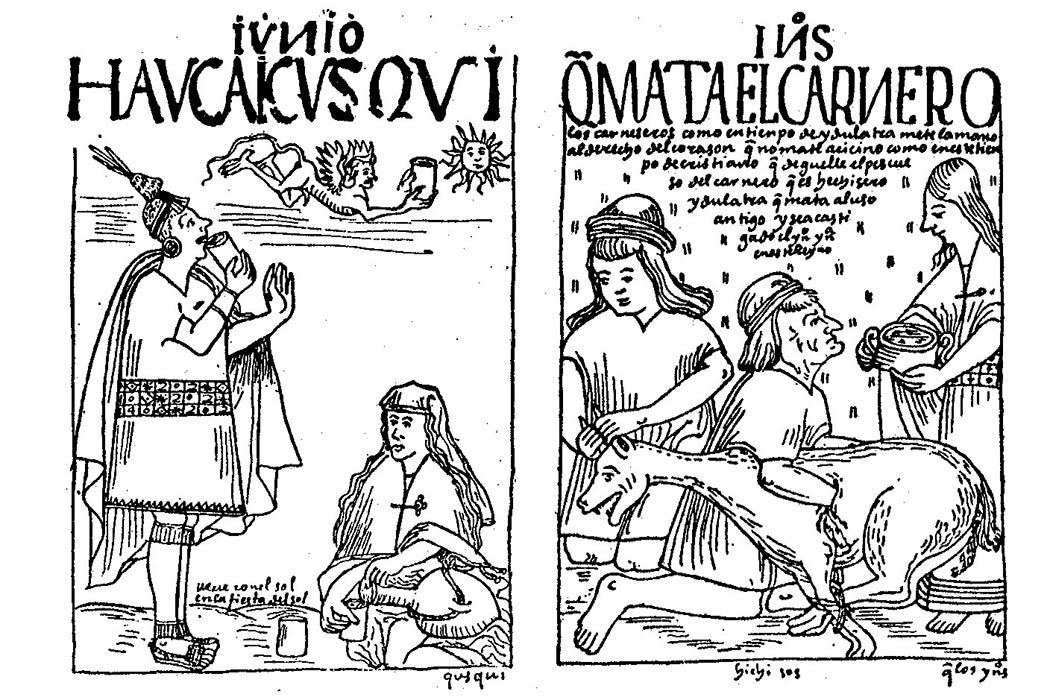 For nearly 300 years, one of the most important and idiosyncratic texts of Indigenous American literature remained forgotten, accumulating dust in some neglected corner of the Royal Danish Library. In 1908, a German academic stumbled upon it: Felipe Guaman Poma de Ayala’s El primer nueva corónica y buen gobierno (The First New Chronicle and Good Government), an illustrated manuscript written in Spanish, Quechua, and Aymara, probably between 1587 and 1613.

“It is a history of pre-Columbian Peru, the Spanish conquest, and the subsequent colonial regime,” Ralph Bauer, an expert in cultural studies of the early Americas, explains. On a first glance, Guaman Poma’s work seems to carefully obey the conventions of the crónica de Indias (history of the Americas)—a Spanish genre that emerged in the sixteenth century. Unlike most writers of these chronicles, however, Guaman Poma indicted “the abuses of the colonial regime and [insisted] that America had a legitimate history before the conquest.”

More than anything, Guaman Poma hoped to convince imperial authorities to stop their colonial project in his native Peru.

More than anything, Guaman Poma, the son of a noble Incan family and possibly a translator, hoped to convince imperial authorities to stop their colonial project in his native Peru. In order to achieve this, he had to work strategically “within the imperial context, inserting his text into sixteenth- and early-seventeenth-century debates over contesting ideas of empire.”

Rich in contextual detail, Bauer’s research illustrates how the question of Spanish expansionism split Europe into two camps: those who supported violent conquest and those who opposed it. The former (mostly conquistadors and their descendants) believed that Indigenous groups were “‘natural slaves’ in the Aristotelian sense—that their governments were based on ‘tyranny’ and their cultural practices were of unnatural ‘cruelty.’” The latter (mostly Dominican missionaries) observed that Indigenous communities’ paganism did not amount to natural slavery. For the most part, their members had not resisted Christianization, and that was what mattered most. For the pro-conquest Spaniards, the Americas were analogous to the recently reclaimed Granada, which had been populated by Moors—that is, infidels worthy of expulsion or subjugation. For the anti-conquest Spaniards, the Americas were seen as the Netherlands or Italy, sovereign territories under the Catholic crown’s protection.

To prove that Peru deserved the status of an autonomous kingdom—and should, therefore, be spared conquest and colonization—Guaman Poma had to vindicate his people’s history. Europeans had a corrupt understanding of the Indigenous past, he argued, because they had failed to consult the essential sources of the quipus. These were colorful knotted strings that Andean societies used to record important events and preserve administrative information. As Bauer demonstrates, Guaman Poma invoked the quipus in an effort to redefine Peru’s position in the Spanish Empire, debunking the essentialist notions of Indigenous Americans’ difference along the way.

With an eye toward persuasion, Guaman Poma tried his best to employ the rhetorical devices of Renaissance Europe. In the absence of a textual heritage, he sought to legitimize his authority throug the quipus. Was he successful in achieving his apparent objective? Perhaps not. El primer nueva corónica y buen gobierno was dedicated to Philip III, the King of Spain, and it is quite possible he never read or came across it. But even so, Guaman Poma left behind a one-of-a-kind object that undermines the earliest versions of Spanish historiography in the Americas. The beautiful illustrations that accompany his writing—nearly 400 in total—showcase the often brutal scenes of men “being murdered, abused, exploited, and tortured by colonial officials and of … women being raped by Spanish” authorities. After three centuries of absolute silence, Guaman Poma can finally speak, bearing unfettered witness to the history and reality of his people.