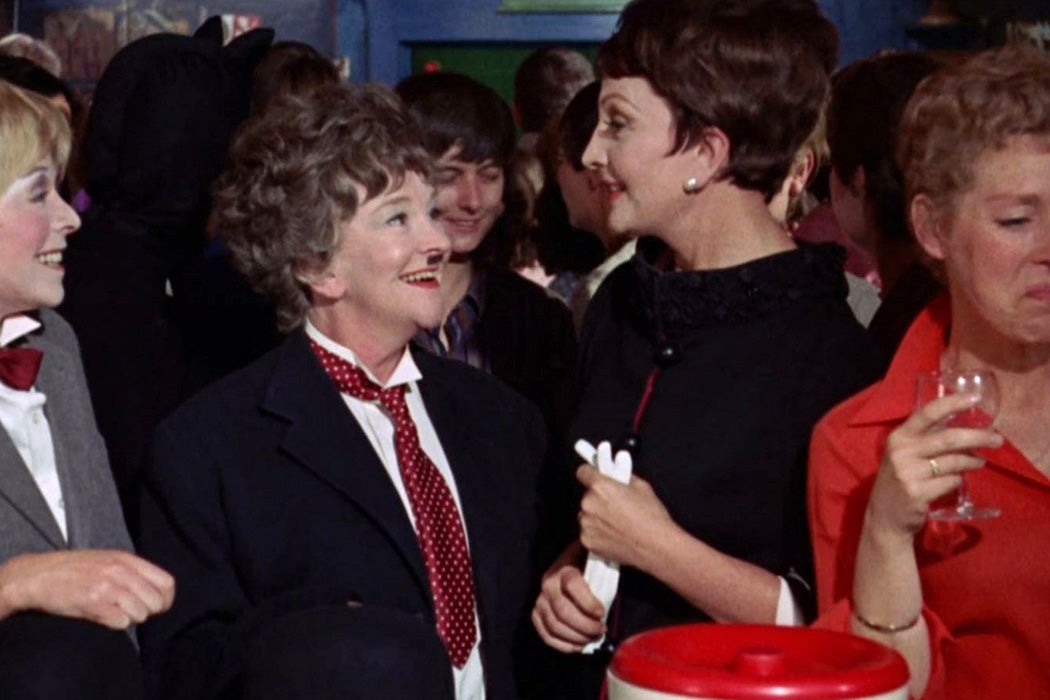 The first Hollywood movie to depict a lesbian bar was The Killing of Sister George (1968). The movie was shot on location at an actual lesbian bar, Gateways, another first for Hollywood. For this part of the movie, at least, director Robert Aldrich demanded authenticity.

Exploring the production history of the movie, film-studies scholar Kelly Hankin argues that Aldrich’s “desire for ‘authenticity’” reflects a common lurid curiosity among straight people about “clandestine lesbian space.” Bars, nightclubs, and lounges, according to Hankin, have “historically functioned not only as a subcultural institution but also as a site for the heterosexual surveillance and control of lesbians.”

With its lesbian seduction scene, The Killing of Sister George earned an X rating, the NC-17 of its day.

The Killing of Sister George was originally a darkly comic British play written by Frank Marcus, set entirely in a living room. The movie, on the other hand, would be mostly filmed on Aldrich’s own turf in Hollywood, except for exterior shots and the crowded lesbian nightclub scenes. Aldrich specified that the lesbian bar “couldn’t be duplicated anywhere.” This location, Hankin shows, was added on to the original shooting agenda.

With its lesbian seduction scene, The Killing of Sister George earned an X rating, the NC-17 of its day. Aldrich acknowledged that the sexually explicit scene in the film was what “gets people into the theater.” Even with media refusing to publicize X-rated films, Aldrich found Hollywood’s new cinematic freedom of the late 1960s essential to its marketing. Hankin suggests that “the lesbian bar [scene] was motivated by the same prurient interests.”

A male location scout described Gateways as having a “rather ‘seedy’ atmosphere” and “some genuine Lesbian types.” A crowd of “genuine” lesbian extras, many regulars at Gateways, would be foregrounded in the movie’s press strategy.

But Aldrich’s quest for authenticity had limits. Hankin notes that people who consent to be filmed have no say over how they ultimately will be portrayed. Extra Eileen Page, for one, felt cheated when she wasn’t credited for a speaking part in the bar scene.

The sex scene and the centrality of the real lesbian bar in the publicity did not, as it happened, make The Killing of Sister George a box-office success. Nonetheless, the movie set a precedent of the “need to both film in and to depict ‘authentic’ lesbian space,” Hankin writes. She also lists numerous examples since, where real lesbian spaces, and real lesbian celebrities, in media targeted at the mainstream heterosexual audience tout their “bona fide status” as the real thing.

Lesbian Locations: The Production of Lesbian Bar Space in "The Killing of Sister George"
By: Kelly Hankin
Cinema Journal, Vol. 41, No. 1 (Autumn, 2001), pp. 3-27
University of Texas Press on behalf of the Society for Cinema & Media Studies