The “Rest Cure” for women is notorious. But the “West Cure” for men, though little known today, is a fundamental part of American mythology. 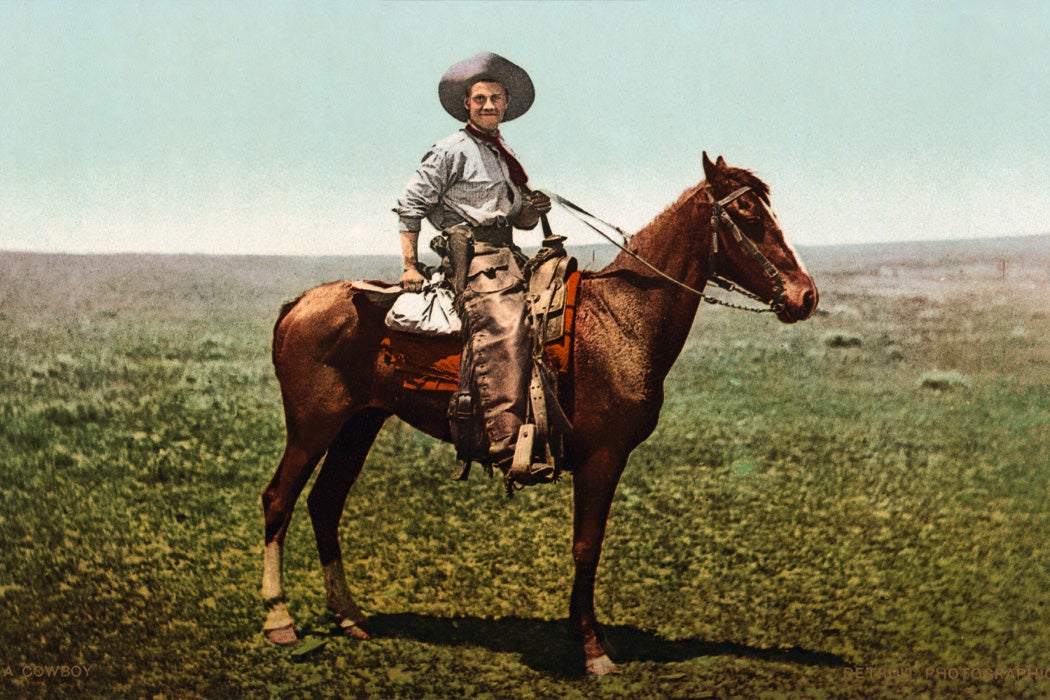 Neurasthenia, also called nervous exhaustion, nerve deficiency, or nerve weakness, was an encompassing name for an extensive collection of symptoms that included fatigue, headache, and anxiety. The neurologist George Miller Beard popularized the term in 1869. It referred to those for those who “had exhausted their store of ‘nerve energy’ through tiring, reckless, or sexually profligate behavior,” writes Barbara Will, an English professor at Dartmouth. More than a disease, it was a “condition of modern life.”

Women suffering from neurasthenia were given the treatment that resulted in Charlotte Perkins Gilman’s classic short story “The Yellow Wallpaper.” Her “nerve doctor,” Silas Weir Mitchell, regularly proscribed bed-rest, force-feeding, and total abstention from creative work for women. Even reading was banned. “Live as domestic a life as possible,” said the specialist to his women patients.

It may come as no surprise that Dr. Mitchell prescribed something entirely different for male neurasthenics. He sent them West, to the great outdoors. One of his patients, Owen Wister, wrote the first modern western. Barbara Will connects these facts in her examination of the “nervous origins of the American western,” published in American Literature in 1998.

Thanks to Gilman, the “Rest Cure” for women is notorious. But the West Cure for men, on the other hand, is little known today. Yet it’s a fundamental part of the origins of the modern western and the mythology of the West. The West Cure was a strenuous rest, a mind- and body-toughening escape from the supposedly deleterious effects of civilization. And, in opposition to what Mitchell told women to do, he urged his male patients to write about their experiences in the West.

Wister wrote that he went to Wyoming in 1885 to become “something of an animal and not a stinking brain alone.”

Owen Wister, the western author, did just that after Mitchell dispatched him westward. A novelist himself, Mitchell also helped Wister get his first western sketches published in Harper’s. Summarizing the West Cure, Wister wrote that he went to Wyoming in 1885 to become “something of an animal and not a stinking brain alone.” Wister’s iconic novel of the cowboy hero, The Virginian, was published in 1902. This was nine years after historian Frederick Jackson Turner famously declared that the frontier, impetus of American progress, had reached its westward terminus.

The Virginian went through 16 printings in its first year and has sold millions of copies since. At least four movies and three TV miniseries have been based on it. Its influence has been even greater, for the stereotypical Hollywood cowboy remains indebted to Wister’s creation. Dime-novel westerns celebrating “adventurous individualism” preceded Wister, but he made the genre literary and respectable. The Virginian, writes Will, “articulated a new and urgent literary vision of masculine potency and conquest in the face of perceived cultural ‘effeminacy.”

Wister’s novel is dedicated to his friend Theodore Roosevelt. Roosevelt had also gone out west to escape, as he saw it, the East’s effete, sickly atmosphere, to become a man’s man and a killer of big game. (The cult of the Rooseveltian outdoorsman is a major reason why we have national parks.) Roosevelt wrote favorably of “the man who does not shrink from danger, from hardship, or from bitter toil, and who out of these wins the splendid ultimate triumph.” That triumph, for Roosevelt, who rose to national renown as leader of the Rough Riders in Cuba, was “domination of the world.”

That domination would be led, of course, by Anglo-Saxon males. Mastering the West was a prelude to returning to civilization back East and becoming a well-balanced captain of industry, Wall Street plutocrat, or President. Wister articulated his xenophobia and racism forthrightly, as in his 1895 essay “The Evolution of the Cow-Puncher.” Like the titular Virginian himself, these cow-punchers all started out as Easterners. According to Wister, after being forged into men out West, they needed to return East to take care of the “encroaching alien vermin, that turn our cities to Babels and our citizenship to a hybrid farce.”