George Washington Williams and the Origins of Anti-Imperialism

Initially supportive of Belgian King Leopold II’s claim to have created a “free state” of Congo, Williams changed his mind when he saw the horrors of empire. 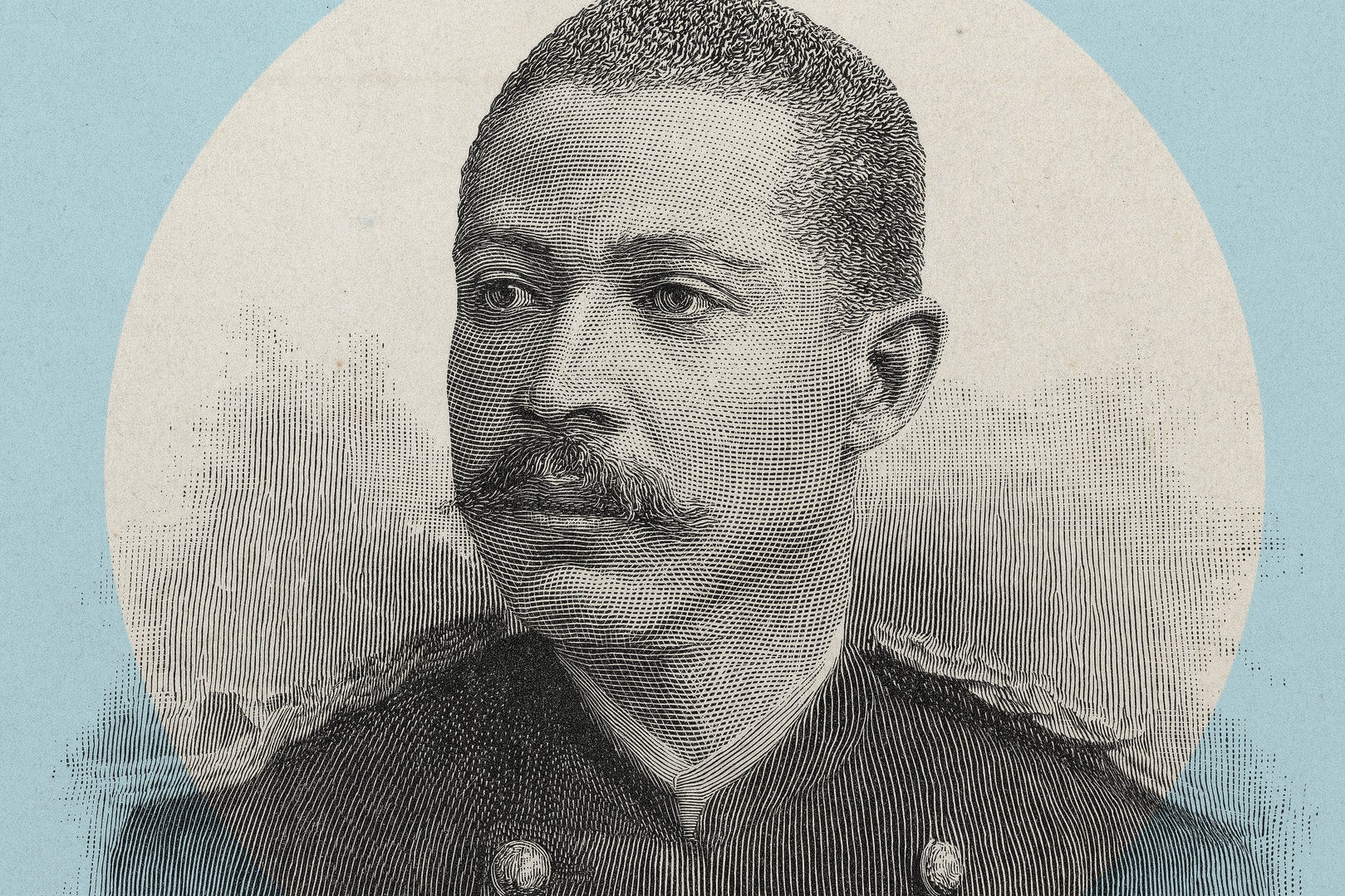 Historian George Washington Williams died in the English coastal town of Blackpool in 1891, frustrated at a moral, political, and social catastrophe he had witnessed, one that would alter the Black radical tradition for good. Williams discovered, in his trips in the Belgian Congo, a problem that had not yet been named: imperialism. It was barbarism and cruelty thought to have been extinguished with the abolition of slavery. The “free state” of Congo was put to work for King Leopold II of Belgium. Children and old men had their hands cut off for the slightest infractions, an indigenous force founded by the king (the notorious Force Publique) could, without reservation, destroy whole villages if they refused to work. All subjects of the Free State of Congo were forced to extract rubber from rubber figs. Only free in name, every Congolese citizen was effectively still a slave. Everybody was forced, with a labor tax by Leopold.

When George Washington Williams saw this suffering up close, it was as if he was looking into a mirror, a mirror that showed a bygone age he risked his life to abolish. It looked like chattel slavery.

Empire was as old as hierarchical society itself. Settler colonialism was seen as a solution to the “social problem” of unruly unemployed workers at home in Europe. Steamships took settlers to European-carved “protectorates” to start life anew. In struggles for land and labor, racial segregation, backed by the powerful imperialist state, would soon follow. The barbarisms that were being reported, from the Nama and Herero genocides in present-day Namibia by the Germans to the concentration camps in South Africa by the English to the war crimes by the US in the Philippines, spurred a global movement which called itself “anti-imperialism.”

We would have never learned about Williams were it not for a graduate student in 1946, John Hope Franklin, uncovering his comprehensive history of Black America.

Williams was a deeply Christian man. He was trained in theology and believed that God directly ruled the affairs of humanity. In his worldview, God tested the patience of humanity but ultimately pushed world affairs toward the arc of justice. The American civil war, which he ran away from home to join at the young age of fourteen, seemed to prove to Williams that behind the Union army—and the end of American slavery—there worked a divine hand. And there was good reason for his optimism: his own life story.

We would have never learned about Williams were it not for a graduate student in 1946, John Hope Franklin, uncovering his comprehensive history of Black America, one of the first of its kind.

During his childhood (in the US), most who shared Williams’ complexion had been condemned to a life of slavery. By his adulthood, during reconstruction, he had stints as a storekeeper for the internal revenue department, as secretary of the four-million-dollar fund to build the Cincinnati Southern Railroad, and served in the State Legislature of Ohio. At one time, Williams was considered for the position of ambassador of the United States to Haiti, a decision made by a Republican administration, but rescinded by Democrats. Williams’ patriotism never wavered, and his optimism was directed toward the improvement of the lot of Black peoples worldwide.

But just as he had come of age in a hopeful moment in American history, i.e., the Emancipation Proclamation, another process had been in motion beyond its shores. From 1800 to 1878, six and a half million square miles of Earth were added to the possessions of Europe. In 1800, that meant Europe owned 55% of the world’s landmass. By 1878, its shared increased to 67%. On the eve of World War I, that became 84% of the globe. Africa was a late target in this partitioning of the world, but by the second half of the nineteenth century, it too was becoming swallowed up by Europe.

In 1884, Bismark claimed southwest Africa, Togoland and the Cameroons, New Guinea and East Africa, Tanganyika within a year. The British had already claimed Egypt and were vying for control with the French in the north of the continent. Tunisia and Algeria were already under French control. Portugal, the oldest colonizer in Africa, had retained her centuries-old claims, and with the collapse of the Dutch East India Company, the British took over present-day South Africa, and shortly after introduced British settlers to the already established polis of the Dutch. This was a messy and dangerous process.

There is a persistent myth that, in 1885, the West African Conference of Berlin divided Africa among Europeans. But by then, the “scramble for Africa” was already well in motion. What the conference did is draw armistice lines for the empires that were now clearly in control of the continent. It was a way to ensure peace so that Europeans could establish “protectorates” over the land they already colonized, according to the late imperial historian George Shepperson.

In Berlin, the scramble for Africa was only recognized, formalized, legitimized, and intensified. Fifteen powers—Germany, Austria-Hungary, Belgium, Denmark, Spain, the United States, France, Great Britain, Italy, the Netherlands, Portugal, Russia, Sweden, Norway, and the Ottoman Empire—had gathered in Berlin for two purposes: to recognize European claims to Africa and officially demarcate them on the map, and more importantly, to follow the US in recognizing King Leopold II’s personal claim to the Congo.

Leopold II insisted that designating a colony of his own and calling it the Congo Free State would help abolish slavery in Africa, spread Christianity to its natives, and open up the continent to free trade. Only few, like the first Black Protestant Episcopal Bishop, Theodore Holly, realized that what happened in the Berlin Conference instead was empires who “had come together to enact into law, national rapine, robbery and murder.”

Williams, typical of his time, thought that Leopold was a sincere king. As the historian Robin D. G Kelly puts it: “Scholars as diverse as George Washington Williams, Benjamin Brawley, and Rayford Logan understood imperialism a bearer of modernity for the colored world.” The American poet Hunt Hawkins, based out of Florida State University, demonstrates that Williams appeared before the Senate Foreign Relations Committee in 1884 to urge US recognition of King Leopold’s claim to the Congo. In addition, “he attended an Anti-Slavery Conference in Brussels and proposed to Leopold a scheme for bringing black Americans to work in the Congo.”

Leopold was alarmed at the idea that Williams wanted to see the Congo for himself, even urging him to wait. But Williams went anyways. What he witnessed, according to the American journalist and historian Adam Hochschild, was so brutal that, in a confidential letter, Williams accused King Leopold of crimes against humanity, decades before the term would reappear in the Nuremberg trials and become recognized by international law. In an open letter to the King that shook the world, he accused Leopold of having a government which “had sequestered their land, burned their towns, stolen their property, enslaved their women and children, and committed other crimes too numerous to mention in detail.”

A month later, the Polish-British novelist Joseph Conrad followed the same trail that Williams took. His notebook, which made note of the numerous crimes he witnessed, provided the material for his timeless novel Heart of Darkness. Both of them had come back from the Congo, witnessing “the horror!, the horror!” of Leopold’s rule, and avowed a complete renunciation of Empire.

George Washington Williams, Historian
By: John Hope Franklin
The Journal of Negro History, Vol. 31, No. 1 (Jan., 1946), pp. 60-90
The University of Chicago Press on behalf of the Association for the Study of African American Life and History
The Centennial of the West African Conference of Berlin, 1884-1885
By: George Shepperson
Phylon (1960-), Vol. 46, No. 1 (1st Qtr., 1985), pp. 37-48
Clark Atlanta University
"But a Local Phase of a World Problem": Black History's Global Vision, 1883-1950
By: Robin D. G. Kelley
The Journal of American History, Vol. 86, No. 3, The Nation and Beyond: Transnational Perspectives on United States History: A Special Issue (Dec., 1999), pp. 1045-1077
Oxford University Press on behalf of Organization of American Historians
CONRAD AND CONGOLESE EXPLOITATION
By: Hunt Hawkins
Conradiana, Vol. 13, No. 2 (1981), pp. 94-100
Daniel Lees; Janet Leake (on behalf of the estate of Edmund Bojarski, copyright holder); Texas Tech University Press