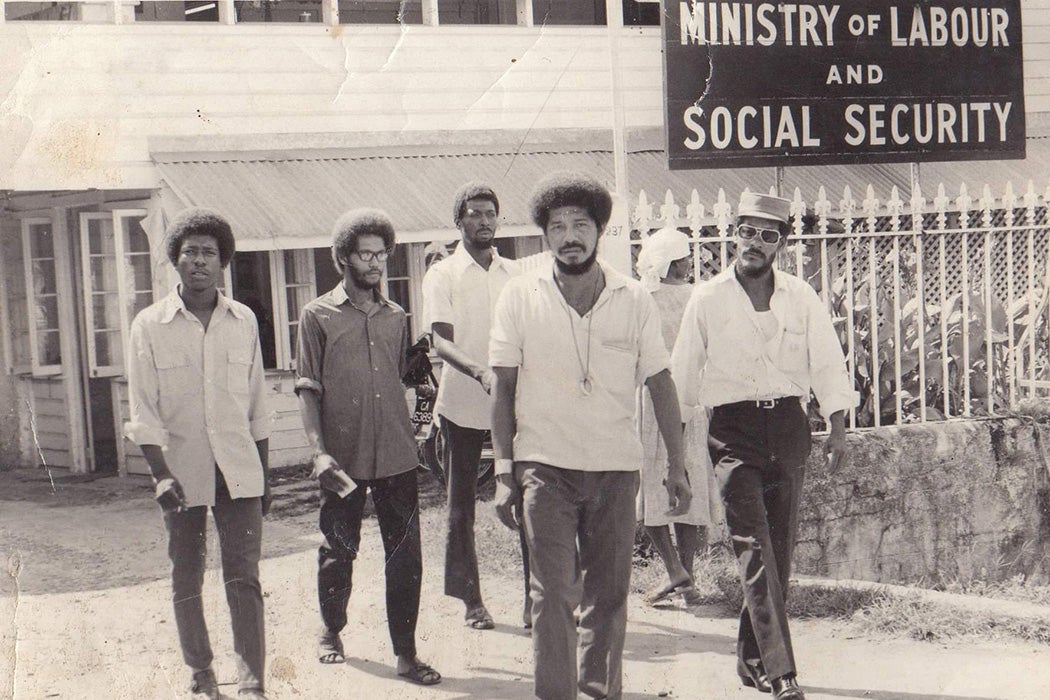 It’s rare for an academic to be banned from a country, let alone for that country’s citizens to riot in response. It’s rarer still for one to have 30,000 people show up to their funeral. But Walter Rodney was, in his own words, a guerrilla intellectual. His purpose: to use his knowledge in service of the working poor.

When Walter Rodney finished his undergraduate studies in Jamaica, he could’ve become a technocrat for any of the newly independent Caribbean countries, like many of his peers. But his intellectual curiosity was directed toward Africa, amid a period when many of its countries were just becoming independent. He pursued his graduate degree at the School of Oriental and African Studies (SOAS), in London.

With wit and evidence, Rodney argued that the European encounter radically incentivized the expansion of servitude.

As a young academic, he disrupted the consensus of West African historiography. When leading historians argued that the responsibility of the trans-Atlantic slavery lay with pre-existing African slave networks and not the Portuguese, Rodney challenged them. With wit and evidence, he argued that the European encounter radically incentivized the expansion of servitude. When historians argued that slavery did nothing to alter the developmental trends in Africa, Rodney argued that European colonialism had not just been an impediment to Africa’s natural development, but amounted to underdevelopment.

So influential were his interventions that historians continue to passionately debate his “transformation thesis,”even today. And yet, it was upon meeting Pat Rodney, and the adventures they would embark upon together, that Walter would decide to eschew the middle-class lifestyle that European historians welcomed him with—to dedicate his life to struggle.

The first step was leaving London and taking up a teaching post in the newly independent Tanzania. In a country that was only independent for six years, Walter Rodney wanted to leave his mark for the first generation of historians to live under an ambitious socialist president: Julius Nyerere. Though Walter Rodney eventually returned to the Caribbean in 1968, he did not say goodbye to Tanzania. He would come back again after being deported from Jamaica.

In the eight months that Rodney spent teaching in Jamaica after he left Tanzania, he transformed from the “Guerrilla intellectual” who fought against the circulation of damaging ideas about Africans in the academy to the man who came to believe that “to be a ‘revolutionary intellectual’ means nothing if there is no point of reference to the struggle.”

“He came from the masses, and he remained among them,” is how Trevor Campbell put it when he was a graduate student at UCLA in 1981. In an interview with Rupert Lewis, Professor of Political Science at the University of West Indies, and a one-time friend of Rodney’s, his surviving wife Patricia described how they would visit the slums of Trench Town together. Rodney and Pat saw people rummaging through dustbins. Rodney knew he had to address the root conditions of poverty through his scholarship, just as Patricia knew she had to serve the people as a nurse.

Not long after, Rodney found two groups of disciples: middle-class renunciants ready to radically transform a deeply divided post-colonial Jamaica, and young Rastafarians with political experience in the upheavals that had shaken the country. One of his closest associates of the time recalled to professor Rupert Lewis that, in his neighbourhood: “[t]he news spread about a young African doctor… who come to get involved in the black struggle. Him was a doctor of philosophy but people just used to refer to him as African doctor.”

During the day he taught courses on history that influenced his students at the university. During the evenings, he had “groundings” with the youth living in the ghettos of East Kingston. He befriended various intellectuals, including Amy Ashwood Garvey and Reverend Claudius Henry, a Rastafarian leader who was accused of planning out an armed insurrection against the Jamaican government. By the time he met Rodney, Henry was simply preaching peaceful reconciliation.

Rodney’s ability to connect students with the working poor was terrifying to the paranoid elite.

It didn’t take long for the government of Jamaica to take notice. In 1968, students had been massacred in a massive protest in Mexico. Their contemporaries in France had allied with workers in Paris to effectively shut down the city. Black power was in vogue in the U.S., and Walter Rodney redefined it to include Indians and all racially oppressed communities. His ability to connect students with the working poor was terrifying to the paranoid elite, which banned all of the works of Stokely Carmicheal and Malcolm X from even entering the country.

In 1968, Walter Rodney attended the Black writers’ congress in Montreal. Other people in attendance included luminaries like Stokely Carmicheal and C.L.R James. But he couldn’t return. The government declared him persona non-grata, a foreigner who was stirring up trouble. Indeed, the Minister of Home Affairs claimed he had “never come across a man who offers a greater threat to the security of this land than does Walter Rodney.”

Rodney went to Tanzania instead, while a young student named Ralph Gonsalves, the president of the students’ guild, convened 900 of his peers and led a march against the expulsion. To the surprise of the government, many more than just the students joined in: anger was widespread, and the march turned into a riot. The government was too late; Rodney left behind a radical legacy. That young student Ralph Gonsalves is one example: he’s now the prime minister of St. Vincent and the Grenadines, whose accomplishments include pushing CARICOM, an organization of fifteen Carribean nations and dependencies, to adopt an agenda demanding reparations.

Rodney returned to an independent Tanzania. In this environment, as narrated by professor Horace Campbell of Syracuse University, he left his mark on what would become the Dar Es Salaam school of intellectual inquiry; a school that directed its efforts against the surviving vestiges of imperialism, and the need to understand decolonization not as an event that had ended, but a process that would take time. It was there, in Tanzania, that Rodney finished his magnum opus, How Europe Underdeveloped Africa.

Ultimately, Rodney left Tanzania for his home country Guyana in 1974, but life wasn’t easy for him there. First, the government intervened to deny him a professorship that was offered to him. Then, his wife Patricia, a gifted nurse, curiously faced trouble finding employment as well. He co-founded a multi-racial socialist party: the Working People’s Alliance, drawing the ire of the Forbes Burnham administration, which was then in power.

On the 13th of June, 1980, Walter Rodney was killed by a bomb that was detonated in his car. In 2014, the government of Guyana set up an independent Commission of Inquiry to investigate his death. It laid the blame on an “agent of the State” who had, by then, long perished. As of yet, no arrests have been made in the open case of his death.