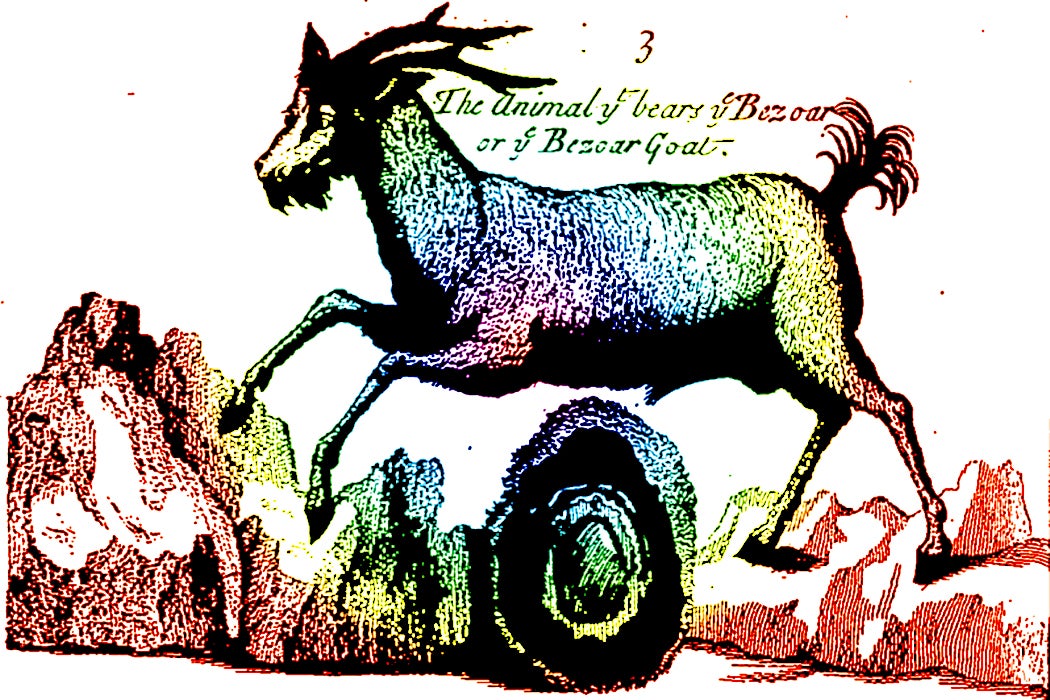 A goat swallows a hair. Washed in stomach acid, the indigestible strand gathers layers. It grows, like a pearl forming from a grain of sand. Without knowing it, the goat is growing an object worth three times its weight in gold, an object with the power to fascinate kings, to make fortunes, to draw ships across the ocean.

The lump in the goat’s belly is called a bezoar. Smooth, lustrous, and dung-colored, bezoars range in size from pebbles to goose eggs. According to tradition, a bit of bezoar, scraped off and dissolved in wine or water, would banish fever, melancholia, even plague. Most famously, they were supposed to counteract any poison, making them a must-have for paranoid monarchs.

The bezoar’s reputation as a panacea arrived in Europe through from the writings of medieval Arab and Persian physicians like Ibn Sina and Ibn al-Beithar. In early modern Europe, this reputation made bezoars one of the most sought-after commodities on the market. They were frequently valued at many times over their weight in gold.

Certainly, it was sensible for prominent people who lived in fear of poisoning to keep a ready remedy at hand.

Intestinal provenance notwithstanding, bezoars were considered a kind of precious gem, comparable to emeralds or rubies. Larger ones were kept in ornate, custom-made cases and stands—confections of elaborate, twining filigree in silver and gold. Smaller ones were often given the jewelry treatment: set into filigree brooches, hung from necklaces. Queen Elizabeth herself wore a bezoar set in a silver ring.

Certainly, it was sensible for prominent people who lived in fear of poisoning to keep a ready remedy at hand. But the popularity of bezoar jewelry went beyond their use as a quick cure. It was believed that the stones could exert their healing power on the body simply by being near it. In times of plague, the rich decked themselves out in bezoar jewelry to guard against contagion, much as they smothered themselves in thick clouds of rosewater perfume to ward off disease-causing miasmas. For those who couldn’t afford the hefty price tag, they could be sold in slender slivers, or rented for the day. Those rich enough to afford cabinets full of bezoars would often keep one in reserve for use by friends.

Of course, there were always doubters, like the physician Ambroise Paré, who devised a famous test of the bezoar’s efficacy. Paré persuaded King Charles IX, who had sentenced his cook to death for the theft of two silver plates, to offer the cook a pardon—if he could survive the poisoning. The cook was dosed with poison, then given a few scrapings of bezoar. He died after seven hours of suffering, and Paré concluded that the bezoar was worthless.

Stories like this did little to put a dent in the demand for bezoars. In fact, they remained popular enough to motivate the production of numerous frauds. A significant proportion of bezoars on the market were probably fake, given that frequently only one or two bezoars were found for every hundred animals slaughtered. According to one contemporary writer, nine out of ten bezoars on the market were fakes. In fact, the legal doctrine of caveat emptor, “buyer beware,” was established on the basis of a court case over a counterfeit bezoar.

A more honest means of meeting the overwhelming demand for bezoars was the manufacture of artificial versions. The Jesuits developed a process for creating man-made bezoars, which were called Goa stones, after the area in India where they were manufactured. These gleaming balls required a veritable treasure hoard to manufacture. Sapphires, rubies, pearls, musk, ambergris, and gold were ground up, mixed with a small amount of true bezoar, made into a paste with rosewater, formed into egg-shaped balls, dried, and polished to a sheen.

The drive for bezoars had other, more troubling ramifications. In 1565, the Spanish physician Nicolas Monardes wrote Medicinal History of the Things that Are Brought from our Occidental Indies and Are Useful In Medicine. The book was a bestseller, and included a long disquisition on the uses of bezoars. After reading the text, the conquistador Pedro de Osma was inspired to search for bezoars in the native animals of the Americas. He soon discovered a whole new set of bezoar sources: the native vicuñas, guanacos, llamas, and alpacas. Bezoars became another commodity to justify the colonization of the Americas, another kind of natural wealth to exploit.

It is strange how much power was bound up in this lump from the belly of a goat. The drive for bezoars created chains of trade between the mountains of Persia, the throne-rooms of Europe, and the highlands of Peru. Bezoars travelled from the hands of humble shepherds to the rings of magnificent Medicis, from the bellies of goats to the mouths of kings.

THE IBEX AND CHAMOIS IN ANCIENT MEDICINE
By: J. MONROE THORINGTON
Bulletin of the History of Medicine, Vol. 15, No. 1 (JANUARY, 1944), pp. 65-78
The Johns Hopkins University Press
Mounted Bezoar Stones, Seychelles Nuts, and Rhinoceros Horns: Decorative Objects as Antidotes in Early Modern Europe
By: MARNIE P. STARK
Studies in the Decorative Arts, Vol. 11, No. 1 (FALL-WINTER 2003-2004), pp. 69-94
The University of Chicago Press on behalf of the Bard Graduate Center
Some Old Bizarre Medical Remedies
By: Hartwin A. Schulze
The Scientific Monthly, Vol. 40, No. 5 (May, 1935), pp. 431-439
American Association for the Advancement of Science
Roses in the Middle Ages
By: Mia Touw
Economic Botany, Vol. 36, No. 1 (Jan. - Mar., 1982), pp. 71-83
Springer on behalf of New York Botanical Garden Press 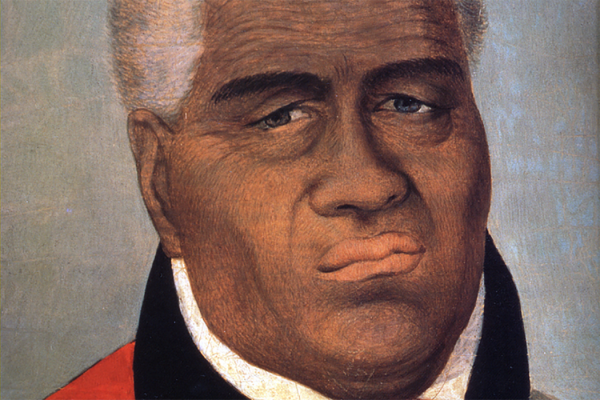 Why Hawaii's 19th-century kings were so drawn to Freemasonry.