Friend or Faux? The Linguistic Trickery of False Friends

“False friends” appear or sound like words in their own language, but have different meanings in others. They give us insight into how language changes. 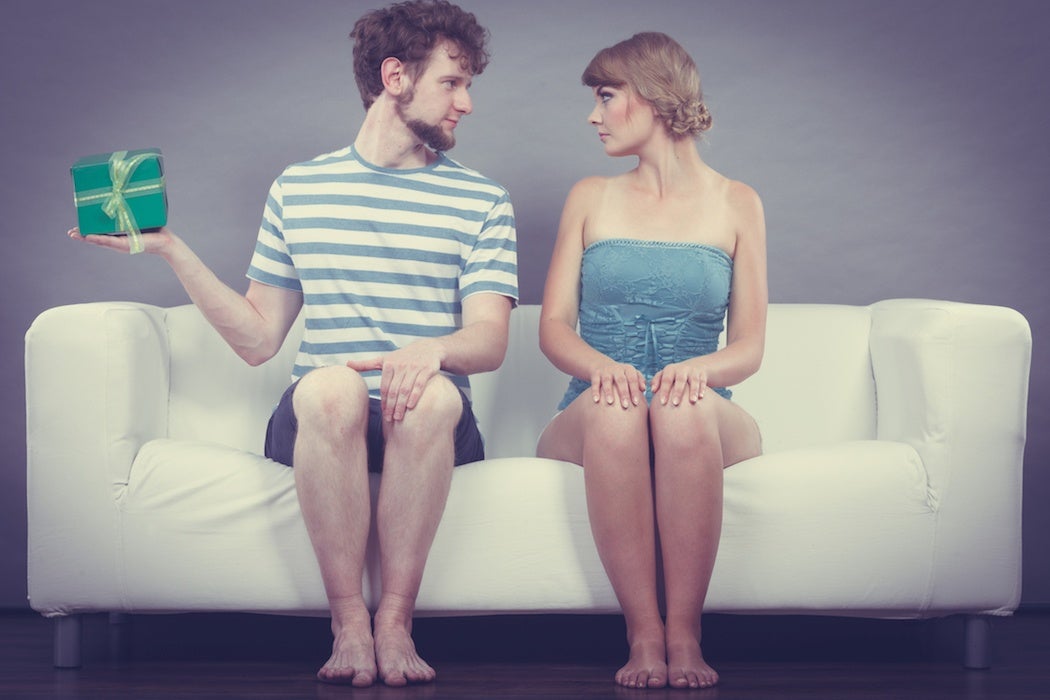 Dear language learners: have you ever embarrassed yourself in Spanish… enough to cause a pregnant pause? Ever talked about preservatives in food, in French, only to receive weird looks? And why should you think twice about offering a gift to a German?

Hapless language learners around the world have fallen into this common linguistic trap countless times: while learning a language, you desperately reach out for the friendly familiarity of a similar sounding word in that language—only to be met with semantic treachery! Confusingly, the words may not always mean what you might assume from what they sound or look like. Hilarity ensues (for your listeners at least) as the dastardly “false friend” strikes again.

In Spanish for instance, “embarazada” sounds like English “embarrassed” but actually means “pregnant.” The sneaky looking “préservatif“ in French means “condom,” as it does in most other languages that use a version of this Latin word (preservativo in Spanish, Italian, and Portuguese, präservativ in German for instance)—except for the outlying English language. Definitely an odd thing to find in food. And as for the poor Germans sidling away nervously if you offer a gift, “gift” means “poison” in German. On the other hand, any Norwegians standing aimlessly nearby might suddenly be intrigued by the offer because “gift” in Norwegian means “married.”

False friends are those confusing words that appear or sound identical or similar to words in their own language, yet have different meanings or senses.

False friends, as many may already know firsthand from their own unfortunate linguistic encounters, are those confusing words and phrases that appear or sound identical or similar to words in their own language, yet have different meanings or senses. The term comes from the longer phrase “false friends of the translator” coined in 1928 by French linguists Koessler and Derocquigny. Since then, they’ve also been called false cognates, deceptive words, treacherous twins, belles infidèles (unfaithful beautiful women), so as we can see, this inadvertent lexical trickery apparently gives people a lot of feelings.

Though often seen as a kind of amusing but inevitable rite of passage for the budding translator or language learner, an embarrassment of hilarity is not the only thing to come out of this. The existence of false friends can have a major impact on how information is received by people across different cultures, cause serious offense and misunderstandings, and can actually start to change languages, exerting pressure on how the semantics might shift, through influential contact from other word senses.

Many examples are benign, such as the etymologically unrelated Italian “burro” (butter) and Spanish “burro” (donkey), or Spanish “auge” (acme, culmination, apogee), French “auge” (basin, bowl) and German “auge” (eye). These all happened to converge into the same form at the same time, from different cognates. Making a mistake with these words might result in a laugh or two, but some other lexical traps have a more interesting effect on communication.

False friends do not always stem from false cognates. They can diverge markedly in word sense from the same etymological origins, through semantic changes such as pejoration or amelioration as speakers move away from certain meanings and towards others. The fact that they clearly appear to come from the same source can actually cause confusion when we least expect it. Consider a longer word like “fastidious,” which has come to develop a slightly more positive nuance in English (attentive to detail) compared to its cognate counterparts in the Romance languages, “fastidioso” in Spanish, “fastidiós” in Catalan, “fastidieux” in French and “fastidioso” in Italian. All these words were drawn from the same Latin word “fastidium,” meaning “loathing, dislike, disgust.“ Once again,  English is an outlier, as the Romance versions stay truer to the original negative sense, with meanings like “annoying, irritating, boring,” etc. This apparently once caused a minor diplomatic incident at a conference, according to researcher Chamizo Domínguez, when an English speaker approved of a Spanish delegate’s speech as “fastidious,” which was misunderstood to mean that it was boring.

Most European languages follow each other in maintaining a certain word sense, while English seems to go another way.

So what’s the cause of this? How do false friends arise and why does it seem like English is such an oddball compared to other European languages in the way its semantics have changed over its history? Research has recorded multiple examples where most European languages follow each other in maintaining a certain word sense, while English seems to go another way. “Eventually” (in the end, finally), for example, means “perhaps, possibly” in the German “eventuell” and Spanish “eventualmente.” Other examples are “actually” (“really, in truth” in English vs “currently” in other languages), “fabric” (“a textile” vs “factory”), “etiquette” (“polite behavior” vs “label”) and even “billion” (“a thousand million” in English vs “a trillion” in other languages). Make a mistake in your accounting with that last example and you’d have a bit of a problem.

False friends arise through the various actions of semantic change. This might appear to happen randomly but often it’s the case that there are identifiable patterns of semantic shifts on groups of words. English seems to have had more major shifts and upheavals than other languages, from the merging of two language families into a single language, with a large part of its vocabulary borrowed from Latinate Norman French, to the Great Vowel Shift markedly changing how words are pronounced, which might account for its outlier status. As the unofficial global language spoken and shared through social media by so many from different cultural backgrounds, it would be understandable if the push and pull of semantic changes happen rapidly and false friends arise.

Even within a language or dialect, confusion can reign if speakers don’t consider the pragmatic contrasts in different discourses.

As languages share words and meanings, the influence of certain words might slowly  and surreptitiously add shifting nuances that may take over a word’s primary sense completely. Carol Rifelj discusses how French has struggled with itself over the many English flavored borrowings that have entered the language, creating false friends —some more obvious than others. Clear borrowings such as “les baskets” (sneakers, from “basketball”) or “le look” (style in a fashion sense) acquire their own senses in the language and might mystify an English speaker, developing into false friends. But what if English speakers all started calling their sneakers “their baskets” and this changed the primary sense of the word “basket” in English? Rifelj observes that this is happening in the reverse direction, to French. Loan words from native English words is one thing, but Rifelj points out how a more furtive semantic change passes by unnoticed by most French speakers, simply because all the words are actually originally French. Les faux amis might suddenly develop into “très bons amis” when French borrows back French origin words, complete with their brand new English meanings. For example “contrôler” (to verify), started taking on a new meaning thanks to English, in terms like “contrôle des naissances” (birth control), yet because the words are French the change passes by unnoticed. “Futur” has taken over many of word senses once carried by “avenir” (future). An English inspired phrase such as “conference de presse” (press conference) has overtaken the old “réunion de journalistes,” and so on.

Well, with all this embarrassing confusion it’s enough to make a person stop learning languages—false friends can also be found lurking in the dialects of the same language, as many researchers have pointed out. George Bernard Shaw is famously reputed to have said “The United States and Great Britain are two countries separated by a common language,” and that’s putting it mildly when it comes to false friends. Misunderstandings of words like “rubber” (eraser vs condom), “pants” (trousers vs underpants), “suspenders” (straps to hold up trousers vs stockings), “biscuit” (hard cookie vs a soft scone), “fag” (cigarette vs a pejorative term for a gay man), “fanny” (vulgar slang for vagina vs backside) can cause some serious blocks in communication, if not outright offense in some cases. From personal experience, as a nervous student anxious to make a good impression on a strict and straight-laced potential landlord, I remember innocently asking if it would be okay to have pot plants in the apartment. “She means potted plants! POTTED PLANTS!” interrupted my face-palming American roommate. It can certainly be easy to make errors because we’re so sure we know what the words in our own native dialect mean that we might not consider or question the new cultural context that they’re said in.

Even within a language or dialect, confusion can reign if speakers don’t consider the pragmatic contrasts in different discourses. Speaking of preservatives, take an example like “conservative,” someone who is aligned to the right of the political spectrum. The word stems from the same cognate as “conservation,” meaning to “keep, safeguard, aiming to preserve” so it might confuse some why conservative political views seem to be ideologically opposed to conservation of the environment. Especially considering Ronald Reagan once said: “You’re worried about what man has done and is doing to this magical planet that God gave us, and I share your concern. What is a conservative after all, but one who conserves?”

Some have pointed out that historically, American conservatives, led by Republican presidents, have been staunch friends of conserving the environment around us, with the National Park System, the EPA and the Clean Air Act all enacted under conservative administrations. A major cultural and semantic shift since then has meant that the conservative outlook today has all but abandoned a strong environmental legacy and become very much a false friend in this regard, with conservative Republican leaders consistently voting against conservation and for big industry polluters instead.

Because meaning can be fluid and languages eventually change, it can be often confusing for speakers, for language learners, and translators to find that finely preserved words and phrases no longer mean what they once meant. While we might have to do more work to overcome the treacherous pitfalls of the false friend, they also preserve a lexical legacy between and within languages that reveals much about the movement of meaning over time. 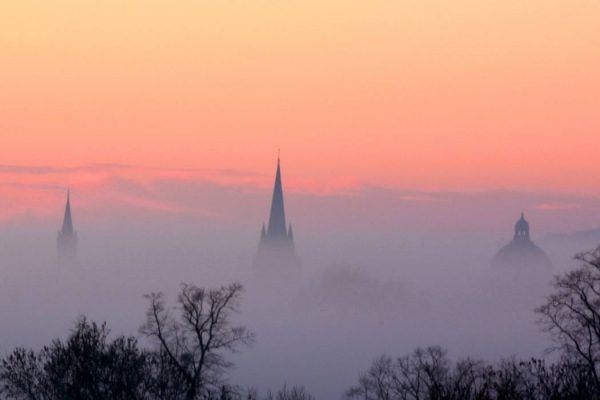