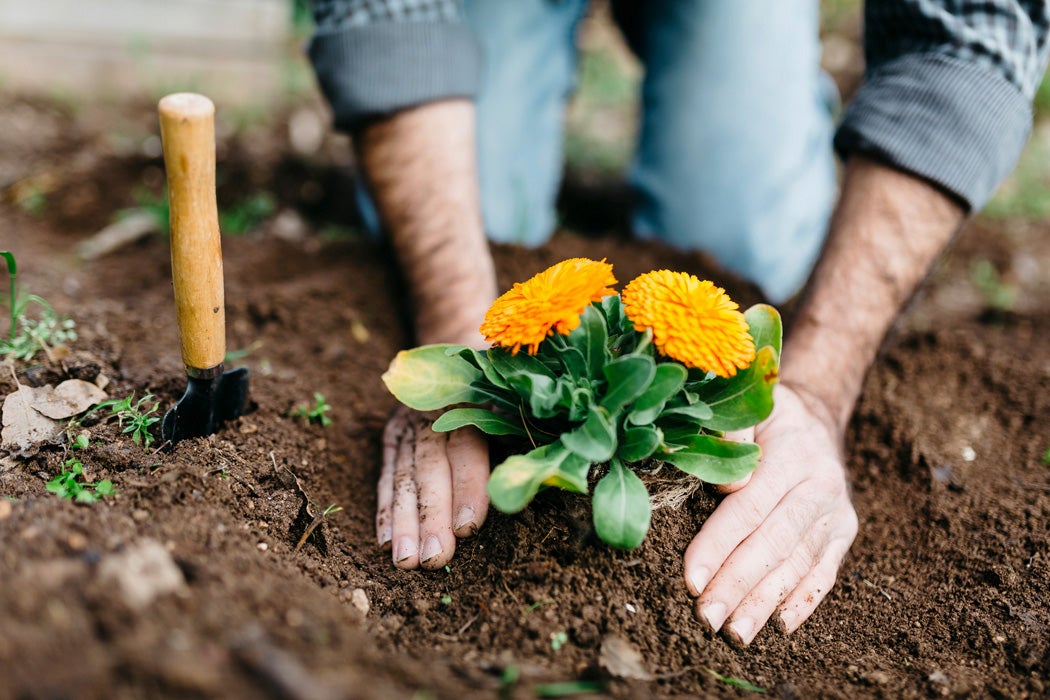 Spring is here, and that means gardens will be blooming soon. About 70 percent of American households engage in some kind of gardening work—whether that’s planting flowers, growing vegetables, or nurturing their lawns. Some do it for the beauty of the grounds, some to enjoy fresh fruit, and others to connect to nature. But in addition to all these good reasons, there is another important reason to tend to one’s garden—sequestering carbon.

The key to locking up carbon is soil—and there are several steps to making that soil store carbon.

Gardens can be very efficient carbon sinks–environments that absorb carbon dioxide from the atmosphere and store it in soils and plants. All it takes is proper managing practices, according to The Climate-Friendly Gardener: A Guide to Combating Global Warming from the Ground Up, a research report composed by the Union of Concerned Scientists. The key to locking up carbon is soil—and there are several steps to making that soil store carbon.

Step One
Minimize use of synthetic fertilizers, particularly nitrogen-rich ones, because they require fossil fuel energy to manufacture and release greenhouse gasses in the process. So do pesticides, from insect to weed killers. Glyphosate—the active ingredient in the widely-used herbicide Roundup—is among the most carbon-intensive. Instead, the guide encourages gardeners to use their own organic materials as fertilizer, and to weed, prune, and rake leaves whenever possible. Gardeners are also encouraged to use composted manure.

Step Two
Avoid leaving the soil “naked” during seasons when plants aren’t actively growing. Bare soil is vulnerable not only to erosion and weeds, but also carbon loss. A good carbon-retaining practice is covering the soil with cover crops during such seasons—grasses, cereal grains, or legumes. These cover crops aren’t meant to be harvested, but they help stabilize the soil and add nutrients to it. Legumes in particular are able to fix nitrogen in the soil, even in very poor, derelict lands. Grown as cover crops, peas, beans, and clovers may supply all of the nitrogen needed for the next season’s plants, substantially reducing gardeners’ use of synthetic nitrogen fertilizers.

Step Three
Plant trees and shrubs when possible, because they absorb more carbon dioxide with their trunks and branches than smaller plants. They also live longer. A recent study found that the urban trees of the contiguous United States accumulate nearly 23 million tons of carbon in their tissues annually. That’s more than all of the homes, cars, and industries in Los Angeles County emit each year.

Step Four
Compost. Rather than throwing away dead grass, plants, and wood clippings, gardeners are advised to compost them, along with kitchen scraps. Composting these wastes will not only reduce methane emissions from landfills but will also improve the garden’s soil and help it sequester carbon.

Step Five
Reconsider lawns. While grasses also store carbon, plush green lawns often require a lot of water and synthetic fertilizer to look good. The guide suggests minimizing watering and using organic fertilizer, including leaving grass clippings on the lawn to be re-absorbed by the soil. Choosing the right grass for the area and climate is important, as some don’t do well in the shade and others are too thirsty to survive in arid weather. Certain grass combos can do the trick, turning high-maintenance lawns into emerald-green year-round carbon storage meadows.

Of course each individual garden will only sequester a fairly small amount of carbon.

But if 81 million U.S. households that nurture small pieces of land adopt these practices, they can turn their properties into efficient carbon sinks. And they will also make their soils more nutrient-rich and reduce heat-trapping emissions from pesticides, fertilizers, and waste.