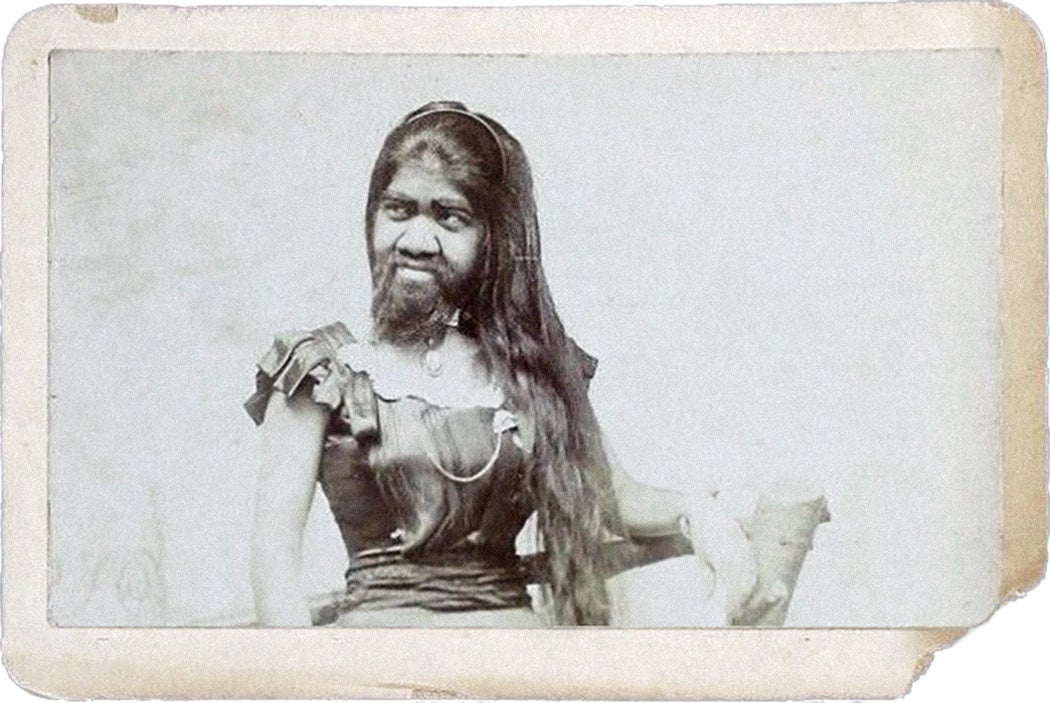 Bearded ladies have become an icon of circus and sideshow, as the film The Greatest Showman demonstrated in catchy, sing-along fashion. They’re not uncommon, nor are they clinically all that unusual. There have been notably hairy women throughout history—from antiquity (Hippocrates mentioned one such woman) through early modern history to modern “freak show” entertainment.

But historically in performance, there was a big difference in how a white woman with hair overgrowth was treated and how women of color were treated, and  that difference influenced sometimes contentious public discussions about the construction of race and gender. Annie Jones, a famous bearded woman who appeared in P. T. Barnum’s Greatest Show on Earth, was billed as “a woman of fine physique,” having “all the accomplishments of one of the fair sex.” In contrast, the hirsute Mexican indigenous woman Julia Pastrana was often described as nondescript and marketed as a hybrid creature or far worse: she was labeled “bear woman” and “baboon woman” during her performance career.

Krao was advertised in a new mode thanks to emergent evolution theory: not as a hybrid creature like Pastrana, but as a missing link.

One of the most interesting cases of a hairy woman being defined in the public eye is that of Krao, a Laotian woman with hypertrichosis who exhibited publicly from the late-nineteenth century into the early twentieth as a so-called “missing link” in Darwinian evolution. Krao’s face was thickly haired, down to her eyebrows, with a thinner coating of hair covering the rest of her body. As a child, she appeared in engravings as a sort of proto-Mowgli, caught unawares in the jungle wearing bangles and a loincloth. Krao was advertised in a new mode thanks to emergent evolution theory: not as a hybrid creature like Pastrana, but as a missing link in the evolutionary timeline as understood in Darwinian theory.

“Facial hair has long been associated with masculinity in western cultures,” points out historian Kimberly Hamlin, “but facial hair on women was not considered a disease until the 1870s, when Americans were reading and digesting the work of Darwin in earnest and when the new field of dermatology was establishing itself as a medical specialty.”

Darwinian theory as propounded in The Origin of Species turned on survival of the best-suited traits for a given environment. If you think about it, hairlessness makes very little sense for humanity within this context: without hair, we’re prone to all sorts of ills from sunburn to frostbite. So, by the time Darwin had come to write The Descent of Man in 1871, the discussion needed refinement. He therefore attributed human hairlessness, relative to our ancestor species, to sexual selection; to Darwin, we came to be naked apes because it was fundamentally more attractive.

“In a Darwinian universe,” Hamlin writes, “beauty played the key role in mate choice, which meant that ugliness had intergenerational consequences.”

Beauty was therefore not simply a frivolous pursuit, it was a woman’s way of controlling the future of the human race. Hair removal products and advertisements ballooned in the aftermath of this Darwinian revelation—electrolysis was developed in the late nineteenth century, joining an assortment of depilatories that could involve anything from quicklime to arsenic (or, for that matter, both). Krao’s hairiness was visual evidence of her distance from humanity’s peak.

Writer Theodora Goss notes that Krao’s performance not only played on the then-current vogue for diving into Darwin and medicine, it validated colonialist ideas, too:

Although advertising posters depicted her as a loincloth-clad savage, in her appearances she was often dressed as a middle-class Victorian child, with her arms and legs left bare to reveal their hairiness. Newspaper accounts stressed her perfect command of English and her good manners. These accounts involved a narrative of civilization. Although Krao had been born an animalistic savage, her time in England had turned her into a proper English girl.

The timing and means of Krao’s entry into public exhibition remains uncertain and flavored with the stuff of fairy-tale legend. Some sources suggest that she was “found” as a child in Laos, then part of the kingdom of Siam, by the promoter William Leonard Hunt (aka the “Great Farini,” a performer and promoter who also wire-walked Niagara Falls and promoted the tattooed man “Captain” George Costentenus). Others credit the explorer Carl Bock for finding her. Some accounts suggest that she was representative of a race of hairy people native to the forest regions where she had been “discovered,” others that she was being kept in royal court by the king of Burma as a curiosity. All of this, in whatever combination, made for a dramatic origin story in the newspapers promoting her appearances, but what we do know is that Farini adopted Krao and exhibited her in England in the early 1880s, after which she came to the United States.

Promotional copy explained that the usual argument folks mustered against Darwin—that no missing link had ever been discovered between simians and man—was handily dismissed by the existence of Krao, “a perfect specimen of the step between man and monkey.” She was said to have prehensile feet, and a habit of stuffing food into her cheeks in the fashion of a monkey or chipmunk. That said, the missing link proposal was called into question from the start; in the words of Scientific American, recounting her appearance in England, “She is, in fact, a distinctly human child, apparently about seven years old.” She was, nonetheless, billed into adulthood as the “Half-Way Point in the Evolution of Man From Ape.”

Krao performed into the 1920s and died from influenza in her Brooklyn home in 1926. In her obituary, circus colleagues noted her piety and skill with multiple languages, calling her the “peacemaker of the side show.” She was still headlined as the “missing link.” 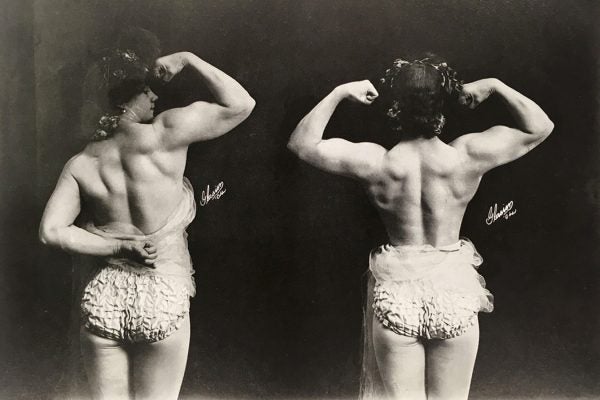