Fashion Forward: How Three Revolutionary Fabrics Are Greening the Industry

Kelp, yeast, and sequestered methane gas are on the forefront of the move to create environmentally friendly clothing 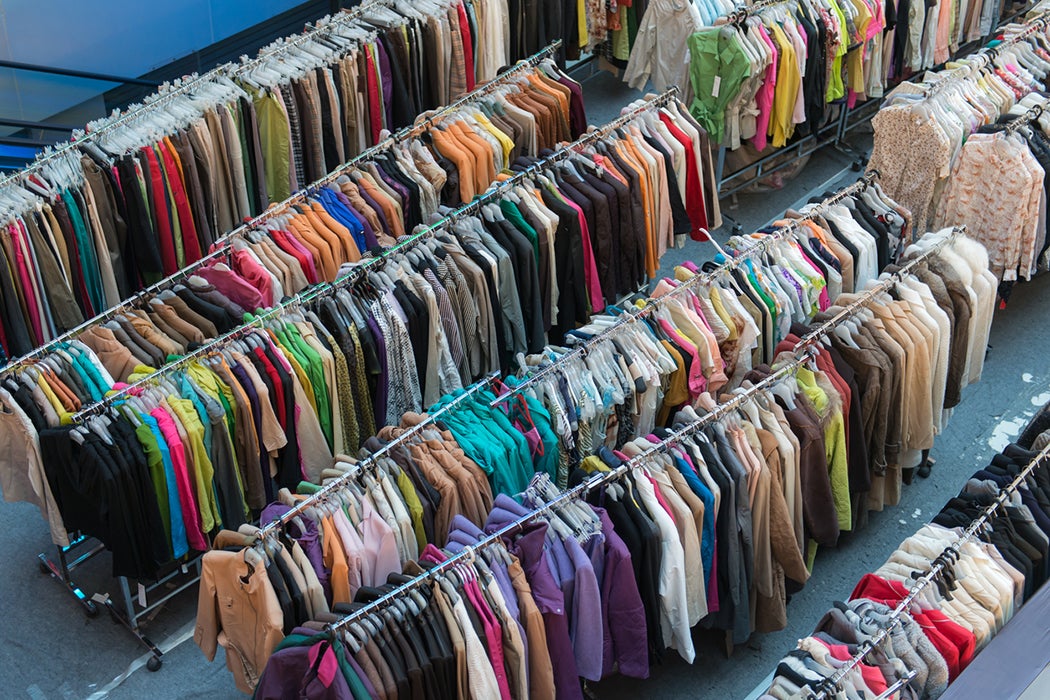 If the holiday sales are tempting you to refresh your wardrobe, consider the environmental footprint of buying a new jacket and throwing away your old one. Today, about 80 billion new pieces of clothing are made each year—400 percent more than 20 years ago, while the world’s population only grew about 30 percent. That growth has a huge environmental cost. The Danish Fashion Institute named fashion “one of the most resource-intensive industries in the world, both in terms of natural resources and human resources.” Designer Eileen Fisher has called it “the second largest polluter in the world… second only to the oil industry,” and while that fact has been disputed, a 2010 research paper found that the industry is responsible for almost 10 percent of global greenhouse gas emissions.

Moreover, once clothes have been made and worn for a short while, they’re thrown away. A new report from the Ellen MacArthur Foundation found that cumulatively around the world a truckload of clothes gets dumped every second. The average American tosses about 82 pounds of textiles a year, much of which ends up in landfills or incinerated. Of the clothing that reaches second-hand stores like Goodwill—only 15 percent of all discards—some is recycled into shoddy (filling for cheap furniture) or upcycled into things like denim insulation, but most of it is shipped to poorer countries. However, they too have limits—African countries including South Africa and Nigeria recently banned Western castoffs, which have overwhelmed their markets, causing the decline of their local fashion business.

The fashion commerce clearly needs major alterations. But is it possible to retrofit a $1.2 trillion-dollar industry?

Two types of textiles—petroleum-made polyester and field-grown cotton, often woven together—have been the fashion industry’s darlings for decades. “Much of [what we wear now] is a blend of PET, a petroleum-based fiber, and cotton fiber,” says Ramani Narayan, a professor in the Department of Chemical Engineering and Materials Science at Michigan State University. But these fabrics have their issues. Cotton, which makes over 30 percent of our clothes’ yarns, is a natural material, but it’s a thirsty crop that siphons 3 percent of the fresh water, and accounts for almost 20 percent of pesticides and 25 percent of the insecticides used in agriculture worldwide, before it’s even picked. Processing cotton—knitting, weaving, and dyeing—also takes water and energy, yielding more pollution. The production of polyester, the demand for which has doubled in the last 15 years, is an energy intensive process that requires a lot of oil and generates harmful emissions, including volatile organic compounds, particulate matter, and acid gases, like hydrogen chloride, all of which contribute to respiratory disease. “Adding PET to a textile gives you better performance—it makes fabrics more moisture-resistant and gives them more washability,” says Narayan, but these textiles don’t break down naturally, and instead fill up our landfills and oceans. Polyester threads discarded from washing machines have recently been found in fish, including some species we eat. Unless PET threads are decoupled from cotton and recycled, they don’t decompose, but separating fibers is very difficult.

That’s where biopolymers come in.  Biopolymers are macromolecules—long chains of smaller molecular units strung together.  These basic units can be amino acids, nucleotides, and monosaccharaides. The most common biopolymer is cellulose, which makes up one third of all plant material on earth. Cotton is 90 percent cellulose, but there are other, less polluting alternatives.

Biopolymers can be grown or harvested from other plants like kelp or from living organisms like bacteria or yeast, which produce biopolymers as part of their lifecycle. The resulting fibers can be woven into a variety of textiles akin to polyester, leather, or a cellulose-like yarn. To a certain extent, these materials can sequester carbon from the atmosphere, acting as wearable carbon sinks. And when they’re thrown away, these biopolymers will decompose. Just as a cotton t-shirt will break down in a compost heap after a few years, so will any biopolymer-based textile.

“Obviously it’s better to use plants and biomass to make products,” says Narayan, “because then the plants fix the carbon and when you make a product from that you have removed carbon dioxide from the environment.” Using biopolymers in clothing can reduce energy and freshwater use and may help mitigate climate change resources. Plus, as the following examples show, some biopolymers can take the creativity of fashion design process in a whole new direction.

Three promising biopolymers—alginate (a polysaccharide), collagen (a fibrous protein), and PHA polyhydroxyalkanoate (a microbe-made polyester)—are already on their way into the fashion production cycle.

Seining Sweaters from the Sea

AlgiKnit uses kelp, a type of seaweed, to produce a biopolymer called alginate, which is then used for textile production. Kelp grows all over the world, forming offshore kelp forests. Some kelp species grow quicker than the fastest-growing terrestrial plant, bamboo, and are inexpensive to farm. As it sprouts, kelp cleans water too—absorbing phosphorous, nitrogen, and five times more carbon dioxide than land plants—so farming it near seaside cities can improve polluted local waters. Like any plant, kelp absorbs carbon to grow, so when used in durable materials, it is also a carbon sink.

AlgiKnit extracts alginate from kelp by adding certain salts to the seaweed base. After the so-called “salt bath” pulls the alginate from the kelp’s cell walls, the biopolymer is extracted from the seaweed residue, dried into a powder and fused into a yarn that can be turned into a variety of fabric types. “The process is similar to that of synthetic materials, where one long continuous strand is produced,” says Tessa Callaghan, the co-founder of AlgiKnit. “The filament can be plied and twisted to increase strength, or cut into short fibers for other purposes.” AlgiKnit won National Geographic’s Chasing Genius Competition for developing this technology.

The team’s big challenge has been to get their end fiber to be strong and flexible enough for use on an industrial knitting machine. It took a lot of experimentation to ensure compatibility between yarns and machines, but one of the team’s goals is to be able to use the yarn in the existing fiber and textile infrastructure, to streamline the new material’s acceptance, Callaghan says.

Modern Meadow’s yeast-produced collagen is another biopolymer that is about to make its runway debut in a form of a leather product named Zoa. The New Jersey-based company designs DNA that can yield collagen, the protein that makes up leather. These specially constructed DNA strands are inserted into the yeast cells. As the yeast cells grow and multiply, they produce collagen and other proteins essential in forming leather, which then cluster together to make a triple-helix collagen molecule. The resulting molecules form bundles that are “cooked” in Modern Meadow’s “secret sauce,” resulting in a leather-like material. “We design DNA that can make collagen, the main building block of leather, then we purify it, and then use an assembly process to turn it into leather,” says Susan Schofer, vice president of business development at Modern Meadow.

Compared to traditional leather industries, Zoa’s production has a lower environmental impact and more fashion design opportunities. To turn a piece of animal hide into bags, shoes, or pants, it must undergo chemical and physical treatments to remove fats, hair, and other impurities. That processing is ecologically and medically fraught—most leather tanning is done in countries with few or unenforced environmental laws because the effluent from the process contains fish-killing sulfides, carcinogenic chromium, and chlorinated phenols that are linked to bladder and nasal cancers in tannery workers.

Using yeast to grow collagen eliminates the animal part of the equation—including slaughter and subsequent hide processing. It yields higher quality materials—perfectly shaped hides without branding marks or scars, and yields very large spans of leather, much bigger than a cow’s body. It also offers nearly endless creative design ideas. The new collagen can be sprayed on top of another fabric to create never-before-seen leather fashions, like the t-shirt that is currently on display at the Museum of Modern Art in New York as part of its Items: Is Fashion Modern? exhibit. This material can also be embossed or textured in ways that cow or pig leather just can’t.

Modern Meadow will be introducing Zoa to market in 2018. The production facilities are already available from related industries such as biofuels. “We use 200,000 or 500,000-liter fermentation tanks [for the yeast],” says Schofer, “So the infrastructure already exists around the globe to take this from lab to commercial levels.”

Sequester Methane and Wear it Too

A sewage plant and a fashion show couldn’t possibly be further apart—but methane sequestered from wastewater is slowly creeping up onto the runways. California startup Mango Materials makes its fabrics by feeding wastewater methane to methanotrophic bacteria that eat it and produce PHA-based polyester that can be woven into threads or molded into various shapes. Unlike the oil-based PET fabrics, PHA threads are biodegradable. “Because it’s a naturally occurring polymer, there’s a sister organism, a methanogen, that will break it down,” said Anne Schauer-Gimenez, vice president of customer engagement for Mango Materials. But that doesn’t mean that a shirt made from PHAs will be less durable than one made from PET. “If you’re wearing it, and you’re sweating, it won’t break down,” Schauer-Gimenez explains. “But once it ends up in a microbial-rich environment, degradation will occur. It could even degrade in a backyard compost.”

Just recently, designer Stella McCartney called for a fashion trade facelift. These biopolymers may be the beginning of this trend. 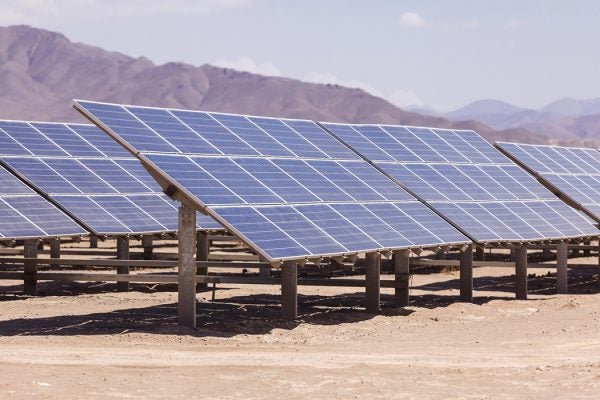 Chile turned the Atacama Desert into a giant solar farm, China denounced coal power, and Guinea has been plagued by sleeping sickness.