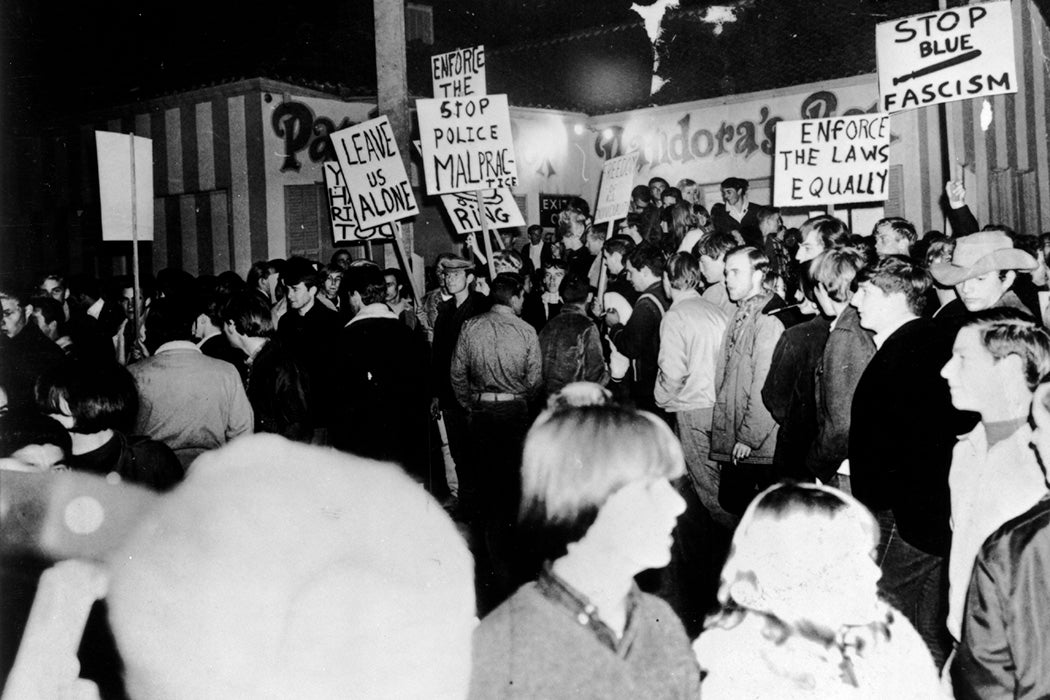 The Sunset Strip. In photographer and author Robert Landau’s opinion, it was “Hollywood’s playground, where the entertainment industry came to party and see or be seen at nightclubs, rock clubs, bars, lounges, comedy clubs, and restaurants,” particularly in the 1930s and 1940s. That stretch of Sunset Boulevard was where the impossibly hip rubbed shoulders with those fresh off of buses, arriving from anywhere and everywhere. The Strip’s shine dimmed a bit in the 1950s, as people stayed in, drawn less to the city streets and more to the at-home entertainment provided by television.

The rough edges that remained on Sunset Boulevard were the perfect setting for the new music scene. Rock was the sound of the Strip, and “new clubs and coffeehouses sprang up to meet the growing demand,” Landau explains. Venues like the Sea Witch, London Fog, and later, the Roxy were springing up to capture the sounds and its audiences. But with this new crowd came new rules.

Because the Strip was once again the place to be, young people gathered there. Part of the effort to bring back some of the old magic included “a tiered licensing system that allowed 18-to-21-year-olds inside clubs where alcohol was served while creating special liquor-less music venues for younger 15-to-18-year-olds,” historian Mike Davis writes. This system, instituted in 1965, increased the number of teenagers hanging out on the Strip—and the number of complaints from business owners.

Once caught, the kids would endure anything from insults to physical violence before being hauled off to area precincts.

“The Strip’s upscale restaurant owners and their wealthy adult clientele began to protest about the lack of parking and the increasing sidewalk congestion,” Davis explains.

The solution was a curfew. Anyone under eighteen couldn’t “loiter” in the neighborhood past 10:00 p.m. What this meant for teenagers was that cops were patrolling the Strip, keeping their eyes open for “primarily the longhaired kids in beads, granny glasses, and tie-dyed shirts,” Davis writes. Once caught, the kids would endure anything from insults to physical violence before being hauled off to area precincts.

The teens, fed up with the nightly harassment, organized a series of protests beginning in fall 1966. These protests led to clashes between protesters and police, beginning in late 1966 and continuing sporadically until fall 1968. One protest, held in November 1966, saw more than 3,000 protesters. The following night, police shut down several streets and called in both the California Highway Patrol and the private security firm, Pinkerton. The captain of the Hollywood division precinct described the protesters as “a thousand hoodlums living like bums in Hollywood, advocating such things as free love, legalized marijuana and abortion.”

As the protests continued, so did violent arrests. One local protestor, Reverend Bill Schatz, told College Times that police behavior often “went way beyond their rights and responsibility.” Actor Peter Fonda was also arrested, along with twenty-seven others, and Bob Denver of Gilligan’s Island fame, witnessed as “deputies spat on a woman in his group, then charged down the street to baton some harmless teen.”

The violence didn’t stop with nightclubs and teens, though. The curfew and subsequent sweeps gave the police the opportunity to shut down other “counter-culture establishments” including art galleries and gay bars. Musicians also began to commemorate the events in song, including “Riot on the Sunset Strip” by the Standells, “Daily Nightly” by the Monkees, and perhaps most famously, “For What It’s Worth,” the Buffalo Springfield song that would become the Strip’s “battle anthem,” Davis writes.

The protests, which would come to be known as the Sunset Strip Riots, represented a huge shift in the culture. “There is a drastic social need that is being demonstrated there,” Reverend Schatz argued. “And this should be recognized by society.”

Editor’s Note: This article was edited to clarify the location of the Sunset Strip.

It's the 50th anniversary of the famous Woodstock festival, which was fraught with controversy before it even happened.